This project was created to develop a focus on the repatriation of grave markers from the battlefields of the Great War. Sometimes known as battlefield crosses, there are hundreds of examples across Great Britain and further afield. They can be found in churches, chapels, memorial halls, museums and occasionally in private residences. Each one represents a person’s death and also is part of a story; a trail of memory, of commemoration from the battlefields and the symbolic return of the dead back home.

During the First World War as the conflict slowly ebbed and flowed across the continent efforts were made to bury and mark as many graves as possible either where men fell, or if conditions allowed for removal either during an action or after the dead were moved to cemeteries set up along and behind the line. Burial of the dead is an old human ritual which extends beyond decency, It marks the disconnection between the living and the dead as part of the process of grieving and separates us from those lost. These battlefield crosses and markers are talismanic of those distant burials.

Burial in situations in the field went beyond these ritualistic requirements; Prevented the lowering of morale; improving hygiene and living conditions and preventing disease. The sheer volume of dead during offensives often involved hasty burials sometimes in situ. Graves were marked for later identification where possible. Markers varied from a simple stick or broken rifle pushed into the ground to army regulation markers, and extend to carved and ornate hand-made memorials, sometimes made by local tradesmen or friends of the deceased produced in the field from scrap wood or packing crates. Each marker is story one that usually circles back to it’s origin. 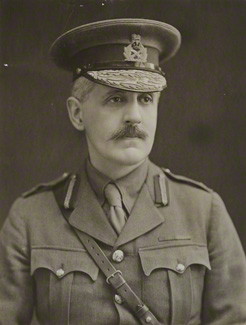 Fabian Ware set up the Graves Registration Commission during the early years of the war, introducing methods of cataloging these battlefield burials and the markers or battlefield crosses and plaques. Gradually over time the cemeteries grew some near hospitals such as Lijssenthoek or Etaples becoming huge, others growing along the lines acted as hubs or concentrations. There were also many small groups of burials scattered across the various lines that marked the passage of the war, often marked with small metal tags and the letters GRU to indicate the grave had been tracked by the Grave Registration Units, some marked with paint, others carved. Some burials were lost in the shelling further complicating the process of tracking the graves. In 1917 Ware was made Vice Chair of the Imperial War Graves Commission, his legacy continues within The Commonwealth War Graves Commission.

Both during and beyond the immediate war years there were attempts to consolidate these burials into the larger concentration burial grounds we see today marking the landscape of the Great War. What has really changed is the way the graves are marked. Under the authority of the Imperial War Graves Commission the old wooden markers and crosses were gradually replaced with the familiar regularity of the gentle curved top and squared angles of the Portland Stone markers  which form the familiar patterns of burial and commemoration we recognise from CWGC cemeteries. These stones are now synonymous with our identity and continue to mark burials from all conflicts since their inception after the armistice at the end of war to end all wars. 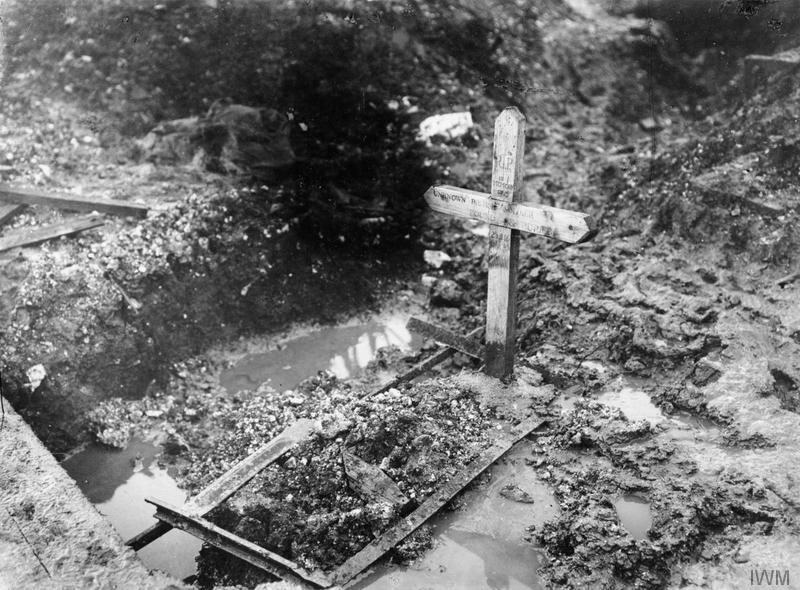 During the process of replacement with headstones some efforts were made to offer these wooden crosses to the families of the people whose graves they originally marked on the front. The family were responsible for shipping them home or collecting them. They were equally responsible for the final location. A number were given to churches, sometimes there are now in collections such as at Cavendish in Suffolk or Deddington in Oxfordshire. Despite the cost of returning these crosses there are examples of them still in existence from nearly every rank and a diverse range of regiments across the whole country and indeed across the world. It would appear that the vast majority of these wooden markers were destroyed in situ, often burnt near the cemeteries, the ashes sometimes scattered across the burial grounds or left in the field to dissipate. The metal tags that marked the name, ranks and serial number on many of the crosses are still found in the fields along the Western Front.

Photo: The grave and simple wooden marker of an unknown British soldier at Thiepval, seen in September 1916. The cross reads ‘R.I.P. In Memory of an Unknown British Soldier Found & Buried 25.11.15’ taken by Ernest Brooks. IWM Q 1540

Portrait Fabian Ware by Bassano, vintage print, 27 October 1916, Fair use, out of copyright. 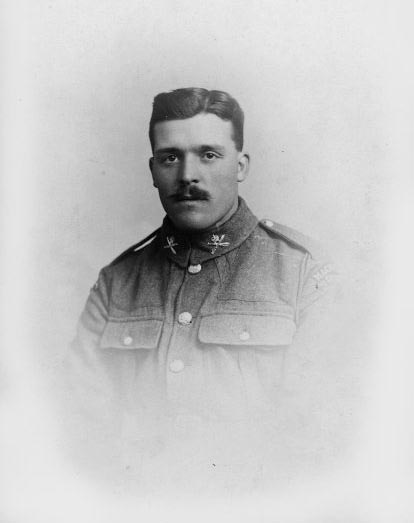 John Abel initially served in the Scots Guards (number with the service number of 13611) but was moved to the 4th Battalion Guards Machine Gun Regiment. Born at Runhall and lived in Attleborough, Norfolk. John died of wounds on 27th March 1918 and is now buried in Grave VIII. R. 51. In Cabaret Rouge, British Cemetery Souchez. He was the son of farm labourers Henry and Annie Elizabeth Abel of “Old Bird in Hand” Hardingham an old pub which had long since closed. His Wooden cross is displayed with three other at St George’s Church Hardingham.