Fleshing out the stories

Each location we’ve listed contains a battlefield marker or cross, each cross marks a journey and a story. A trip to the front and the symbolic return. They all represent the life of a man, group of men or in a few cases a battalion. We will be featuring various stories on the blog. We need your help to do this too.

A lot of research can now be done at home using digital devices such as tablets or computers with a wide range of records accessible either relatively cheaply or for free that give clues to the movements of the men and where they were leading up to the action or event that caused their death. Where this is not possible most public libraries also have free access to the internet as do some research and archive centres.

There are no hard and fast rules and even professional and academic researchers will have their own methods and types of ordering for researching. A good place to start is the Commonwealth War Graves Commission Website (CWGC), which has quite exact search facilities that allow you to search by name, regiment, which conflict, location and date of death along with other strings of variables to find your man or men. This will lead you to a set of records based around a webpage giving the location and date as well as at least one recorded service numbers and regiment. It may also contains details of next of kin and addresses all of which can start to build a story.

There are a wealth of records available online this will include the Medal Index Card (MIC) which again will confirm details such as regiment or regiments and any associated service numbers and any medals allocated and confirm date of death. Medal allocation can also give some indication of dates; Most soldiers will have some combination of the 1914/15 Star, Victory and British Medals (a Pip, Squeak and a Wilfred), An absence of the 14/15 Star indicates they started service later, you may also find gallantry decorations, some of which may relate to the action the soldier died on, some may not. (MIC for Norman Francis Wace – Coston, Norfolk)

Other records that are especially valuable are Service Records and Pensions where they exist. These form a large body of documents around 60% of which are missing due to a fire caused by the London Blitz during the Second World War. The files vary immensely, the Burnt Records still show the signs of the fire, others are difficult to read, some are in almost perfect condition and easy to understand. They contain many hands and can either be a few pages or be very extensive and detailed. Service records, where they exist, can help build up a real picture of a person. You will probably find a list of height, weight and build, eye colour, hair and any birthmarks, distinguishing features such as scars or tattoos. There might be a list of sicknesses and injuries, postings and transfers and any punishments. Sometimes there are letters to and from the commanding officer to a relative or inter-departmental messages from within the war office. Where a pension exists it will often list any monies owed.

Grave Registration Unit (GRU) records may tell you exactly where the person was originally interred. Many of the original battlefield burials were moved by the GRU to a certain extent during but mostly after the war had ended. This is usually detailed in these records, as well as information on any dedications added to the gravestones once the wooden markers were removed, it will also tell you who made that dedication again adding some detail to the story.

Regimental War diaries are a good source of all the activities that were endured and some of the ones enjoyed at the front. Whilst individual men are rarely remarked upon unless they did something extraordinary. Some officer ranks will get more mentions than Ordinary Ranks (OR). But it can be valuable in building up a picture of movements and actions leading up to an event and give some sense of the locations the men were in.

General information and timelines can be picked up from many websites, including orders of battle and the structure and nature of the different divisions during the various campaigns. There are simply too many to list. A more detailed picture from many books and guides, regimental histories. The date of death of a man and what regiment he was in can usually be cross-referenced against a sequence of events to identify where he was and what he was doing fairly quickly.

Census records for 1911 are available free online and can help build up the picture further, you can often find out the profession and family status of the men and women involved, whether their were children and using maps work out where they lived and what the conditions were like, this adds background colour to any story. Other census records are available via subscription and pay to view websites. There may also be information on a person’s family tree available online either free or paid to view/subscription which can sometimes help build up a picture of a socio-economic background over a longer period of time. 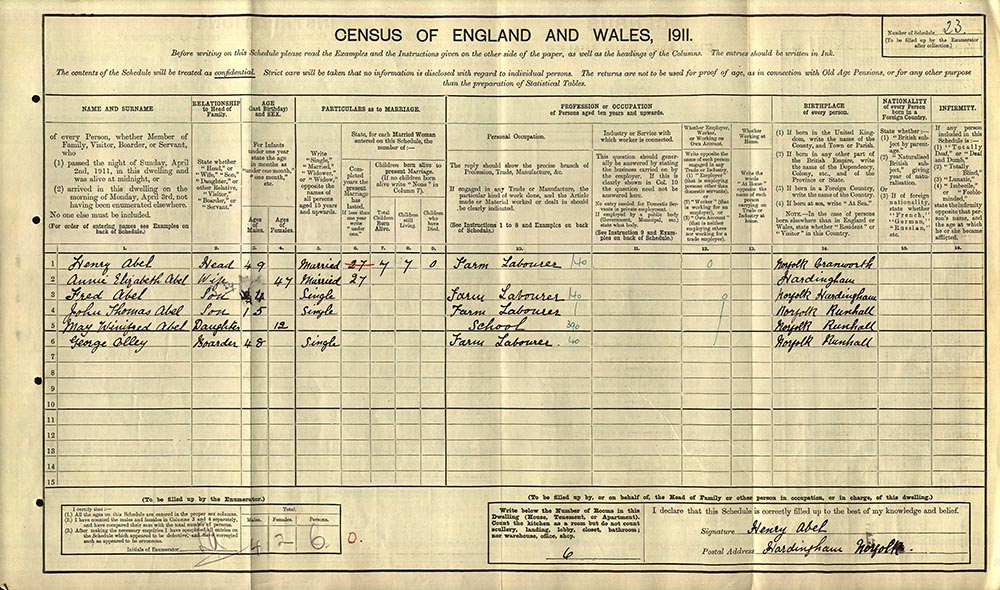 1911 Census for the Abel family of Runhall, John’s Cross is on of four in Hardingham St George, Norfolk.

Personal stories are sometimes available through local history groups, family researchers and via local museum and heritage organisations. Some towns and villages will have projects that directly relate to the First World War within the locale. These can be an invaluable resource to get involved with and to draw from, quite often War memorials have already been researched and information will be available about the men involved. Local groups may also know more background and sometimes know who surviving relatives and descendants of these men are, occasionally this may reveal physical items like diaries, medals and photographs and more importantly stories that have been passed down.

It is always worth asking. It is also an idea if you are visiting a church or hall to survey a cross to ask anyone there if they know anything about the men being remembered, there are some surprisingly complete stories built up over the years from oral history, recollection and association.

You may also like to try your local library and archive centre. As well as books they usually have access to the internet and may have free access to some research and genealogy websites. 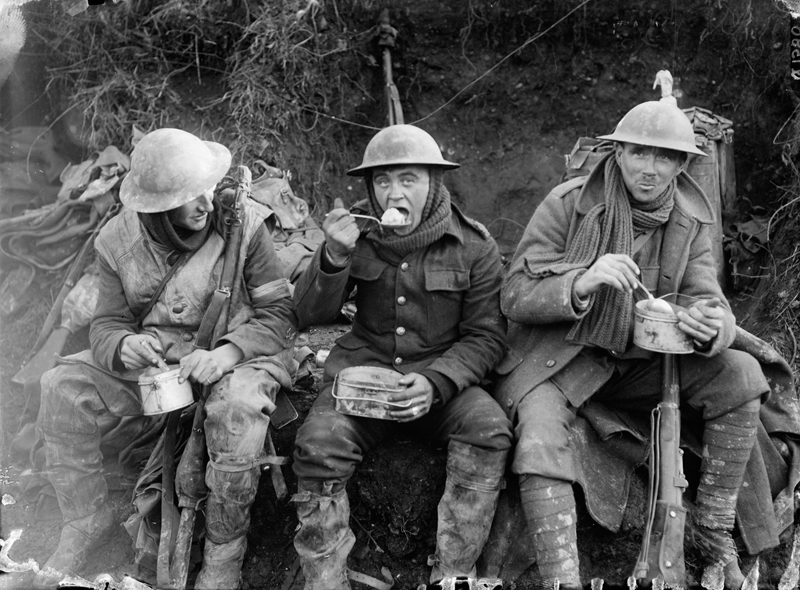 CWGC – Date and detail of death, where buried and next of kin. The site now also contains GRU records. Free access.

National Archive – Contains a broad spectrum of records for both military and non-military including the WO372 records for Medal Index Cards, has a he range of military records including war diaries, conscription, courts, personnel and has detailed advice on research. (Some free and Pay as you go)

Ancestry and Find My Past – Commercial websites. Both hold a host of records including Medal Index Cards, Service and Pension Records and Census details, they also contain other people’s research which can be useful. (Both require a subscription, both offer a free trial which is worth using and making the most of)

The Western Front Association – Furthering interest in the Great War 1914-18. A huge site full of articles and opinions and blogs on a huge range of subject relating to the people who were involved in the First World War. Your local branch might also be able to help.

The Imperial War Museum – A massive archive of information, images and collections. You may well find information here relating to specific Battlefield Crosses and photos of the men they remember. (Rights of use are subject to terms and conditions; generally but not exclusively Fair use and Not for profit)

The Gazette – A huge number of records from the London Gazette, listing medals and awards amongst many other things.

Family Search – A free access Family tree site, which often contains some interesting info that may not be freely available elsewhere.

Some local archives have photos of soldiers within their archive, a prime example would be Picture Norfolk which has a huge archive of photos collected during the 1920s as a permanent memorial, these have been digitised and are online.

Many museums and collections such as The National Library of Scotland have a large archive of photos that cover the whole period of the First World War. Many of these collections contains images that are out of copyright, CC/Attribute and Free to use images.

Please be aware that whatever you are using it will be subject to terms and conditions of use in most cases, because something appears in a search engine it does not necessarily mean it is out of copyright, it is always best to check. Please attribute your images or cite a source where possible. 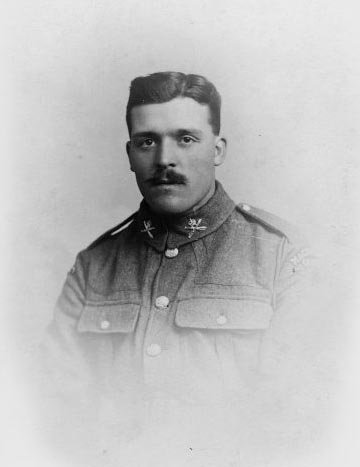 John Abel of Hardingham from the Picture Norfolk collection.