A Grade 1 listed building, St Mary is a rather beautiful church originally built in the 14th century, it has later 16th century and Victorian additions. It contains a memorial to Group Captain Leonard Cheshire and Sue Ryder. The Battlefield crosses are situated in the base of the tower mounted high on a wall behind a glass screen, access is therefore limited, it is therefore essential to make an appointment to view them if access is required, although they can be seen through the screen. Please check as the church maybe locked.

This is one of the most impressive collections of markers in Britain. The crosses are alleged to have been brought back by the vicar of the church circa 1920.

Report and photographs from Andrew Macdonald and Jason Kercher. 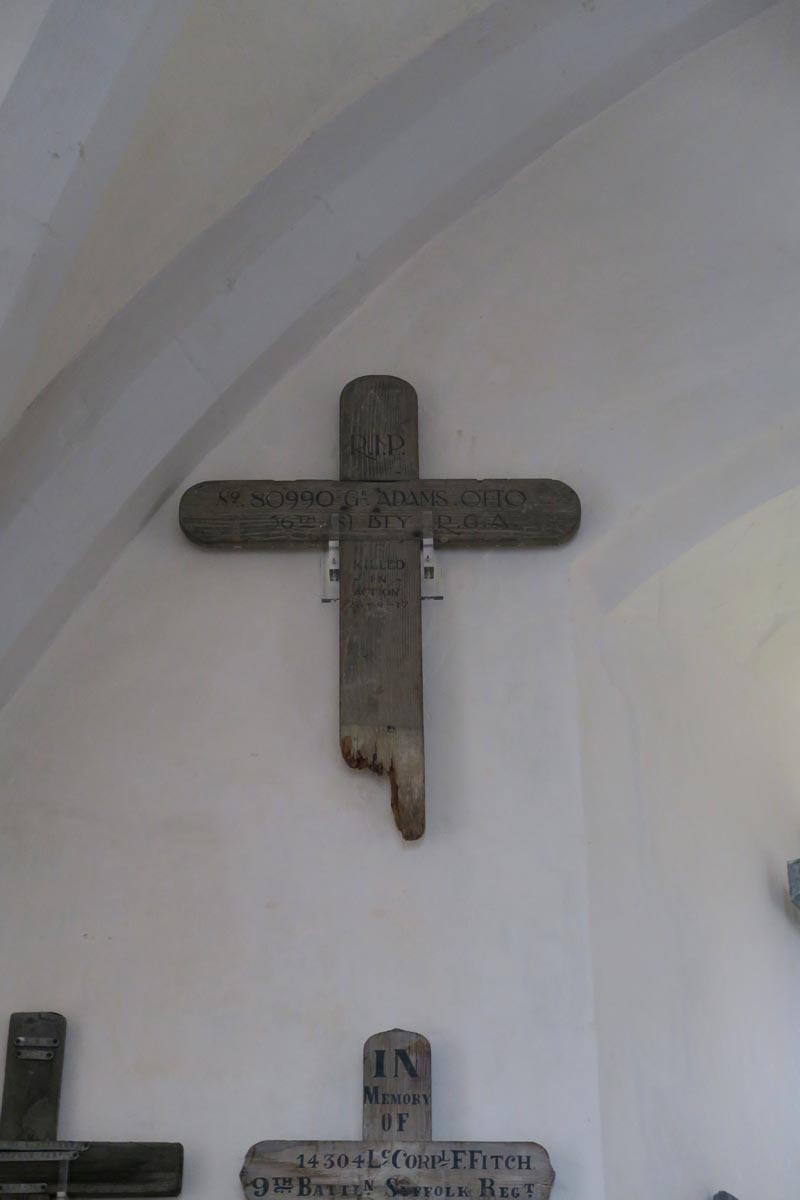 Other information
Mounting to wall: Perspex brackets
Detailing:  Rounded edges to cross piece and shaft top
Evidence of use in field (earth marking, cracking, staining, shrinkage):
Surface insertion depth (into ground if apparent):
Finish (varnish, paint, oiled, unfinished etc):  Unfinished
Condition (cracked, paint peeling, woodwork, damage etc): Broken off half way down shaft. Possibly in the ground to this depth as there is a faint line just above the break in the shaft, which could be rot.

Notes and observations:
Gunner Adams enlisted on February 1st 1916 and went to France as part of Rawlinson’s Fourth Army in August 1916. He was transferred to Allenby’s Third Army in March 1917 and posted to 56th Siege Battery, Royal Garrison Artillery at the end of the month.  He would most likely have been one of the crew of twelve of the 9.2” heavy howitzer. He was killed in the Battle of Arras on 23rd April 1917 and is buried in in plot B45, Mindel Trench British Cemetery in Saint Laurent-Blangy north east of Arras. He was 34. His service record largely survives and can be seen on Ancestry. 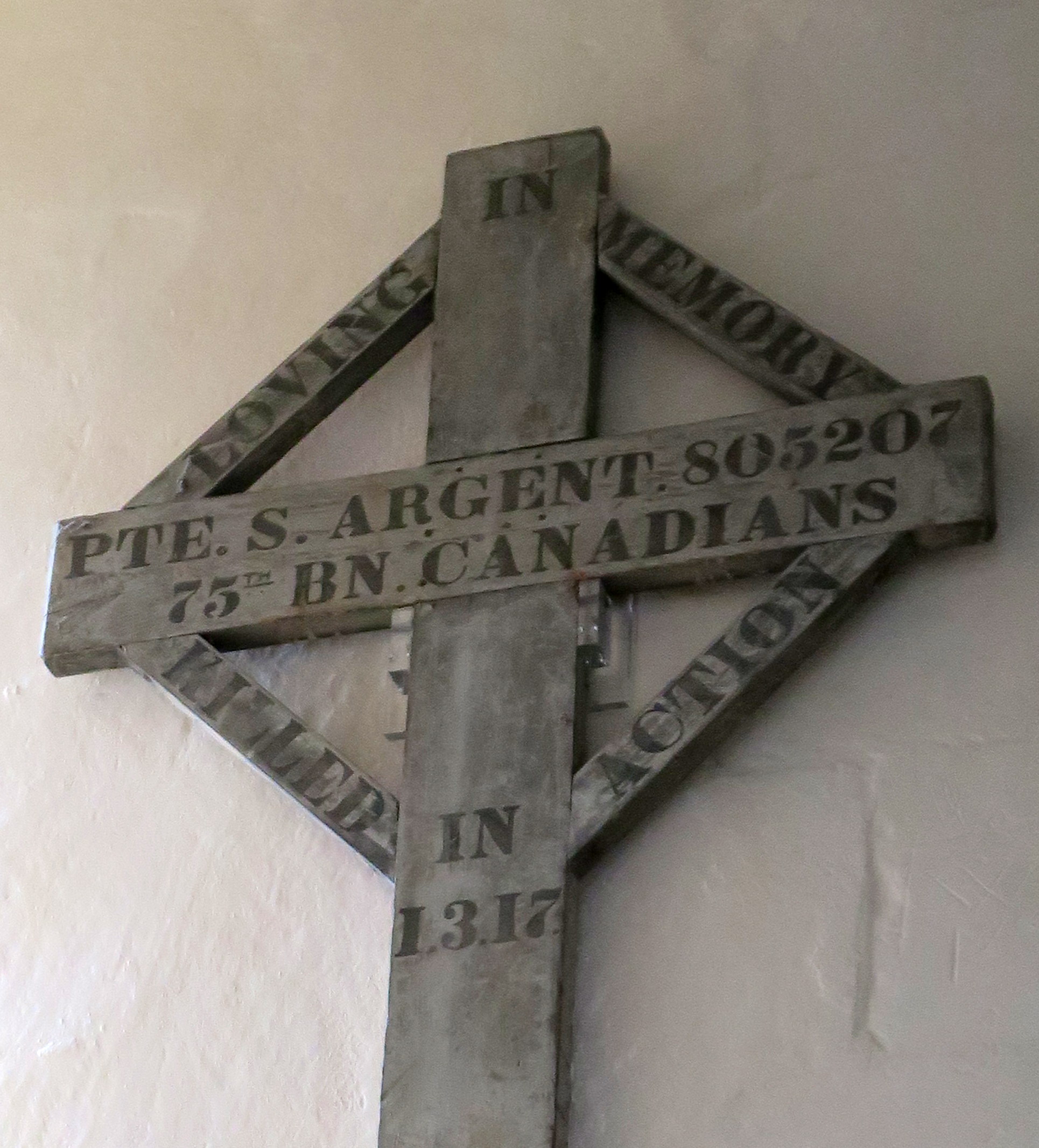 Notes and observations:
This is a Celtic cross. Like all the crosses at Cavendish it is mounted high on the wall in the bell tower so we were unable to get measurements.  We used binoculars to read the inscriptions on some of the higher ones. Jason has got a pano shot of the whole tower.

Stephen Henry Argent was born in Cavendish on Dec 11th 1892. In the 1911 census his occupation was given as unemployed. In March 1915 he married Nellie Plumb, also of Cavendish. Sometime after that Stephen and Nellie moved to Bowmanville in Ontario, Canada. On January 6th 1916 in Bowmansville Stephen signed his attestation papers, swore an oath of allegiance to King George Vth and joined the 136th Battalion of the Canadian Overseas Expeditionary Force for the duration of the war plus six months.

On September 25th he sailed for England from Halifax aboard the SS Corsican which had been commandeered as a troopship. He arrived in Liverpool on 6th October.  After disembarkation his battalion went to a camp at Sandling near Maidstone in Kent, where he was transferred to the 39th Battalion, CEF.

On November 15th 1916 his battalion disembarked at Le Havre, where he was transferred to the 75th battalion and arrived at the front on November 21st.  By this time it looks as if Nellie had returned to England and was living in Foxearth, not far from Cavendish.

On March 1st 1917 the Canadians mounted a large scale raid on the German lines consisting of some 1700 men from the 54th, 72nd, 73rd and 75th Battalions. It was not a success. The four battalions suffered 687 casualties. The 75th war diary for that day records 68 other ranks killed. Stephen Argent was one of them. He is buried at Villers Station Cemetery near Arras. The battlefield crosses of the Cavendish men were presented to relatives at a memorial service in the church in March 1924.

There is a great deal of information about the Canadian Expeditionary Force available free at the National Library of Canada. 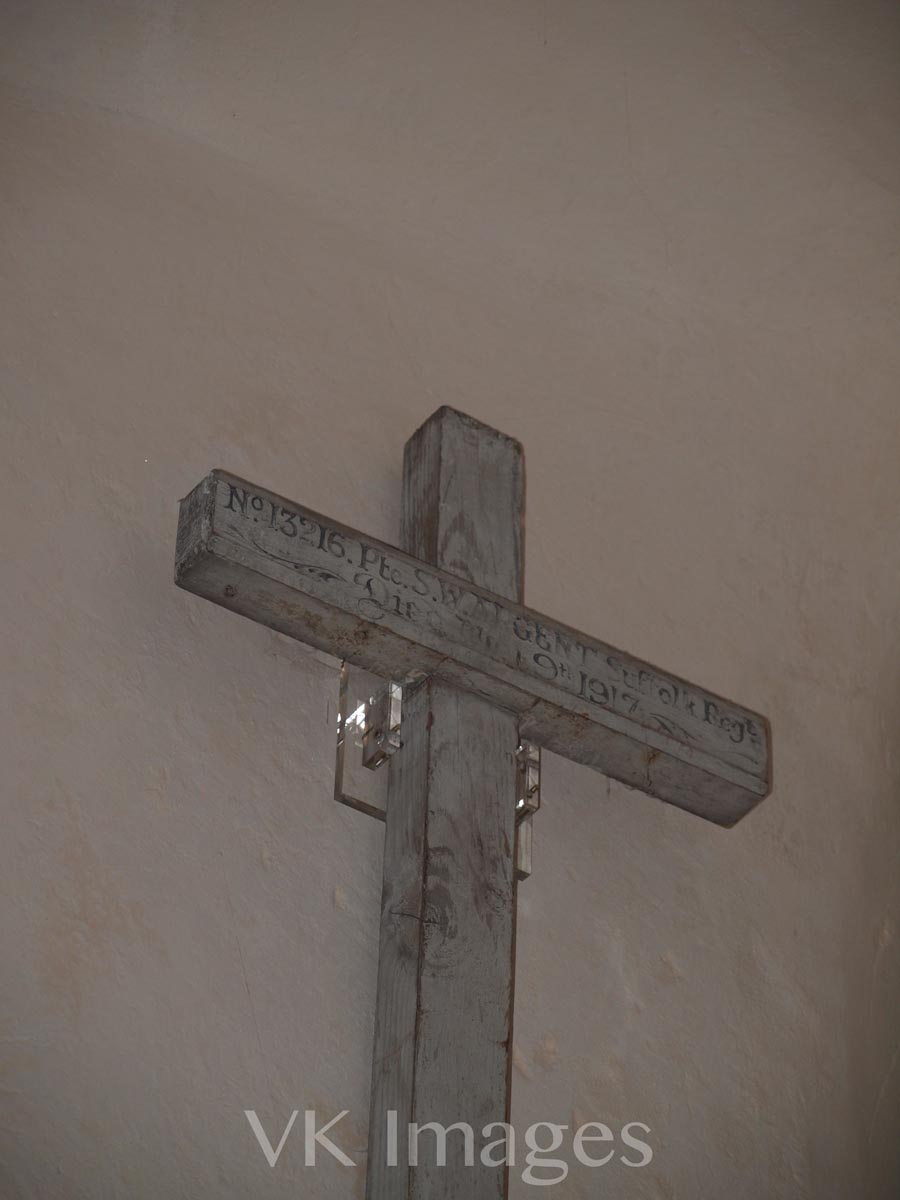 Other information
Mounting to wall: Plastic bracket mount.
Detailing:Of obviously heavier construction than the other marker crosses, possibly not from the Western Front, made at home?
Evidence of use in field (earth marking, cracking, staining, Surface insertion depth (into ground if apparent): Staining to pointed base of marker, up to about 300mm from base.
Finish (varnish, paint, oiled, unfinished etc): Painted grey, very washed out and faded
Condition (cracked, paint peeling, woodwork, damage etc): Other than paint fading, good condition.

Notes and observations: Pte.G.W Argent is buried in the churchyard across the Green from the church, possibly the marker in the church is for indicating where he was buried, prior to the IWGC putting up the headstone. 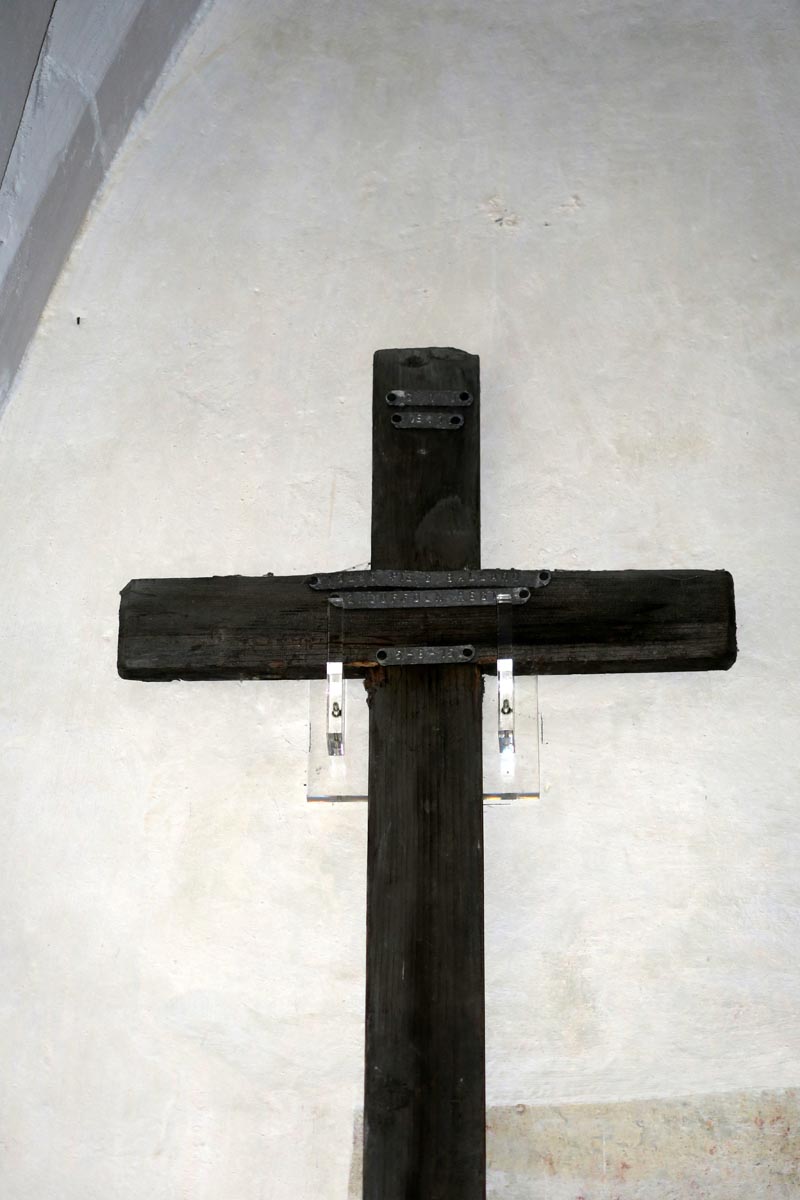 Notes and observations:
John Ballard was born in Cavendish in 1890. He was killed near Ypres on 5th August 1915 and is buried in Spoilbank Cemetery a few kilometres south of the town. There is some confusion with his census and military record and the IWGC record. The census records show him as John Ballard and his MIC gives his service number as 13202. His battlefield cross and graves registration report form give his name incorrectly as George Ballard, service number 13220. The fog of war. The later IWGC Register of the Graves give his first name and service number correctly, although it gives his mother’s name as Ada. Ada was his sister, his mother’s name was Eliza. 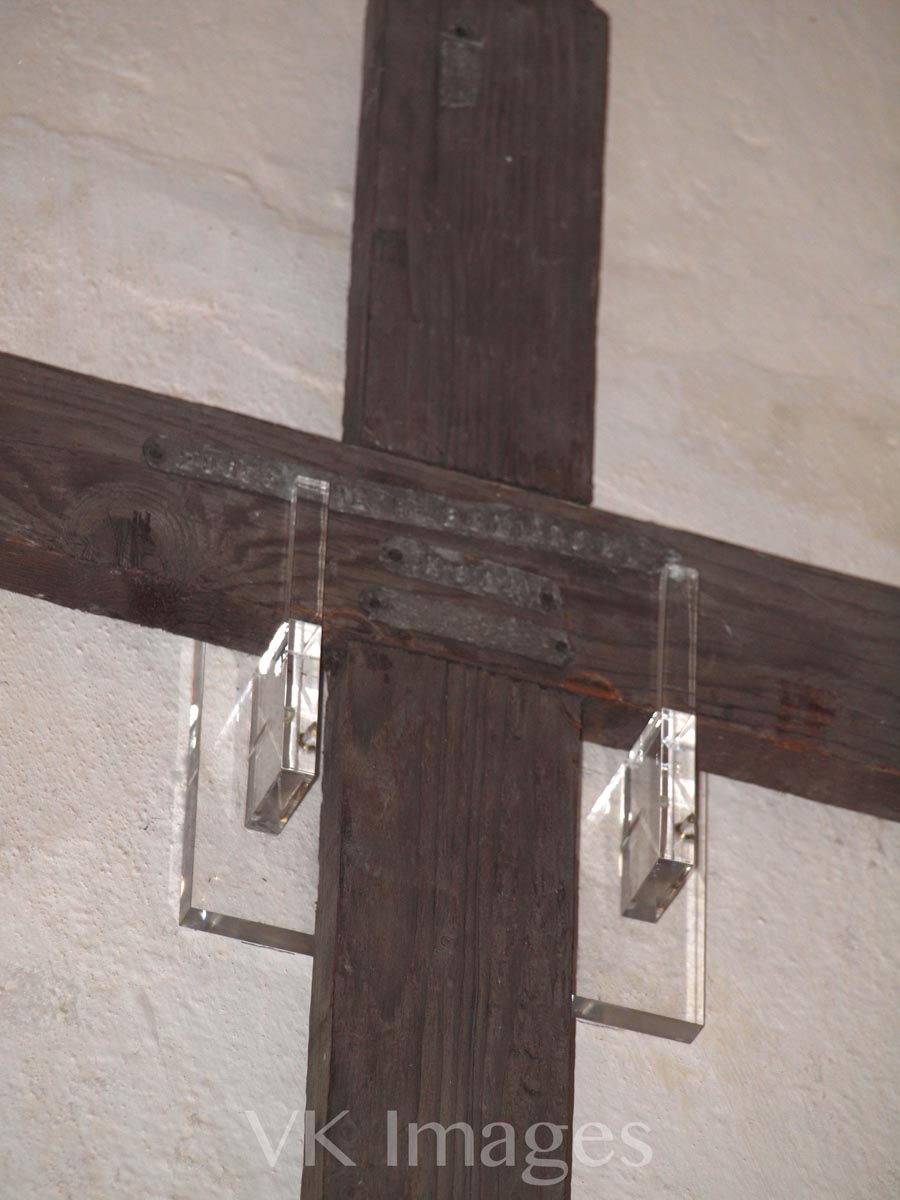 Text type (e.g. hand-written, GRU tags, carved): 3 alloy tags, appears there was one at the top, but it is missing. 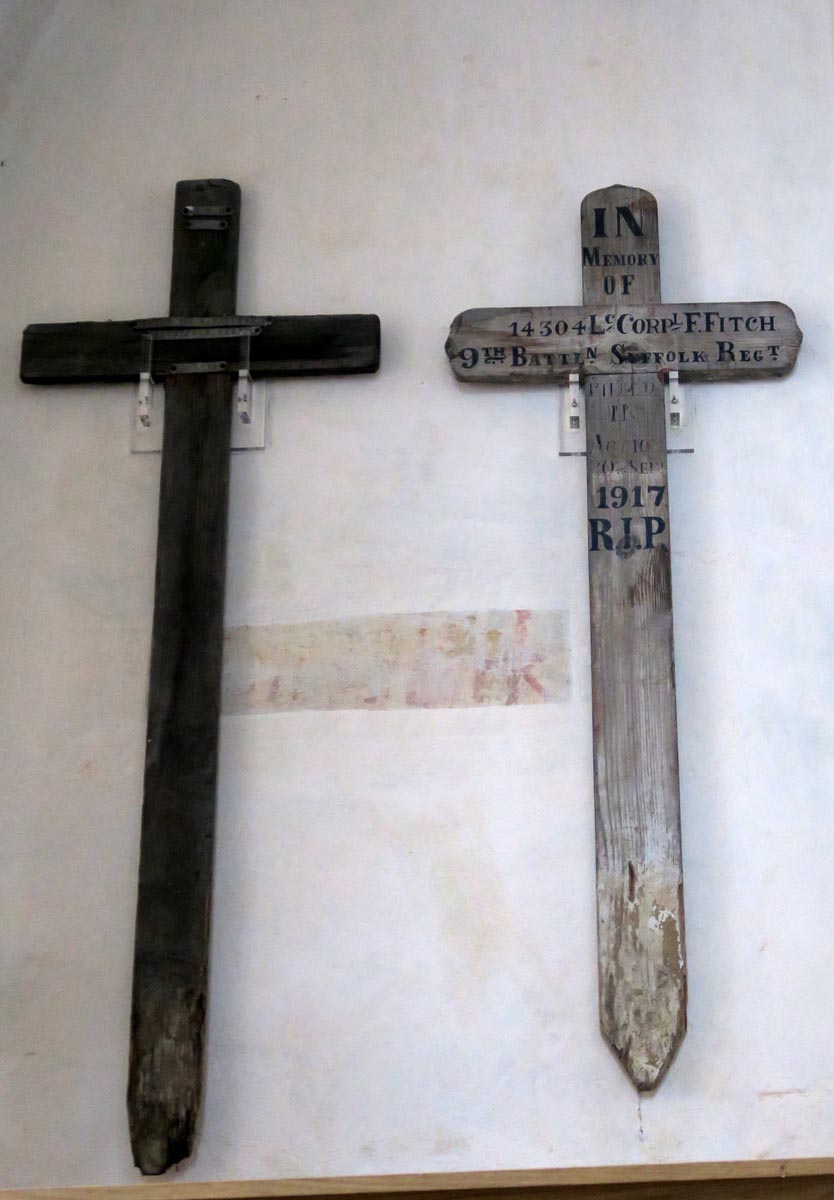 Notes and observations:
Fred is buried in Mazingarbe Communal Cemetery in the Pas de Calais in northern France. His older brother William survived the war and spoke at the memorial service in the church when the crosses were presented to relatives in 1924. He had three other brothers, Frank, Percy and Maurice. 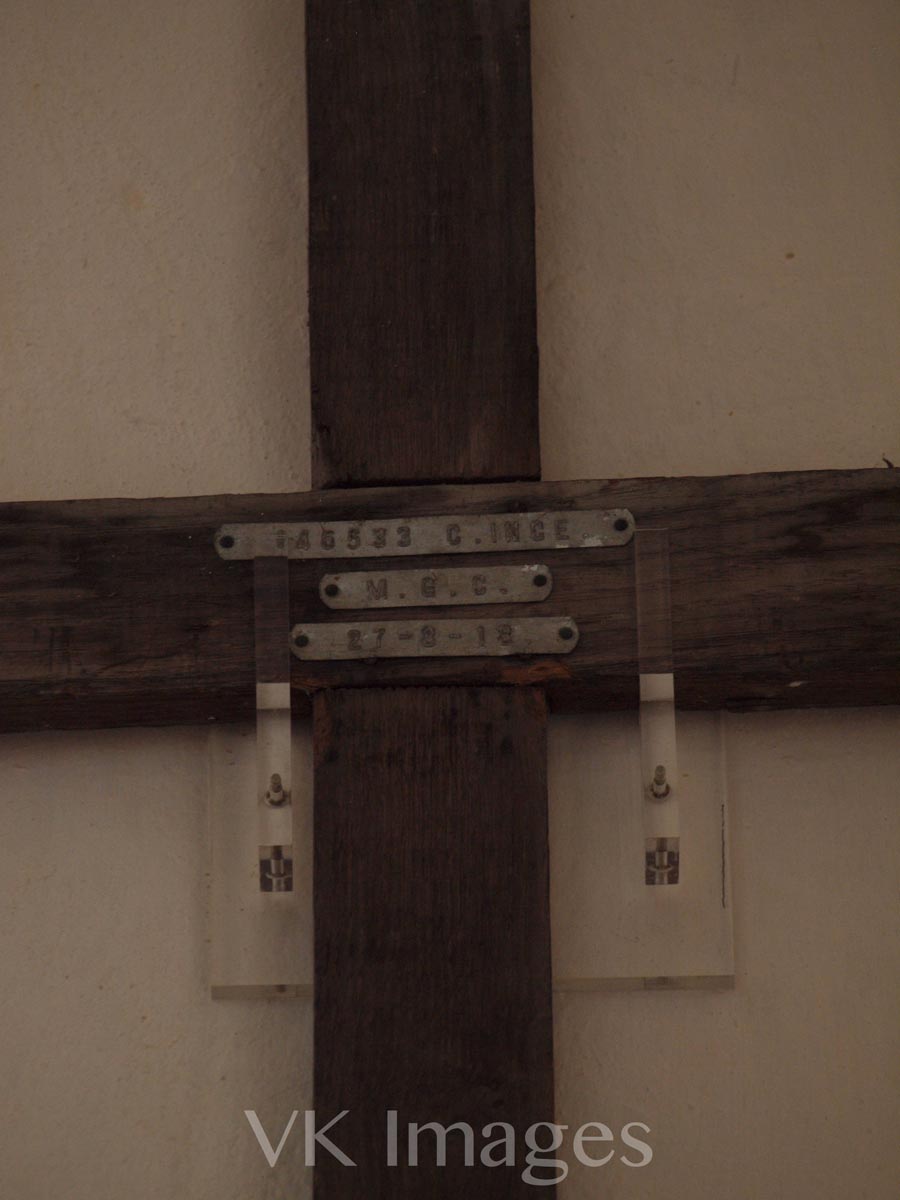 Cross dimensions (millimetres please)
Unable to measure due to limitations with access to marker, estimated to be 1200mm

Other information
Mounting to wall: Plastic brackets.
Detailing:Simple cross construction, cross beam has the tags on it. Terminals of shaft and cross beams are sawn straight. Base is pointed form insertion into the ground.
Evidence of use in field (earth marking, cracking, staining, Surface insertion depth (into ground if apparent): Insertion staining up to depth of 300mm up the base of the marker.
Finish (varnish, paint, oiled, unfinished etc):Wooden unfinished.
Condition (cracked, paint peeling, woodwork, damage etc): Good condition considering its age. 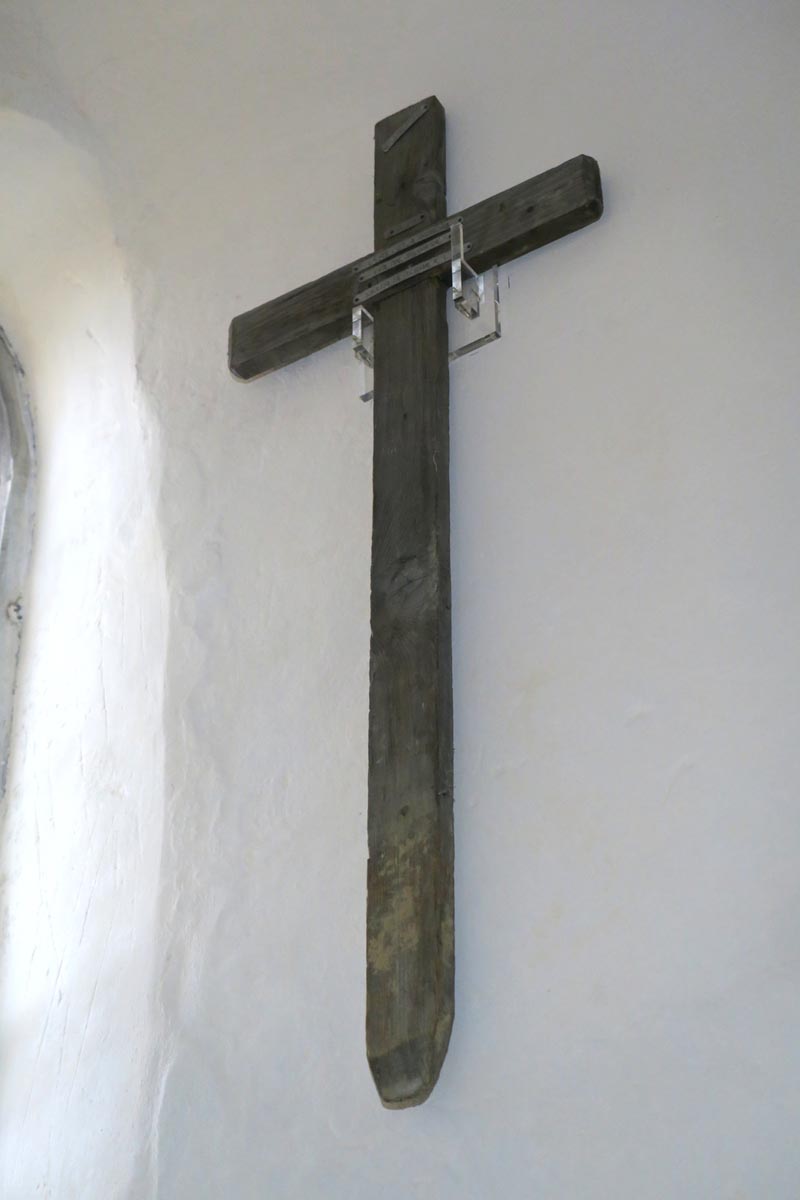 Notes and observations:
Jack Johnson served in the 7th Battalion, the Suffolk Regiment, one of the New Army battalions. He was killed on May 4th 1917 aged 21 during the battle of Arras and is buried in plot B10 in Happy Valley cemetery. Happy Valley cemetery was designed by Sir Edwin Lutyens. 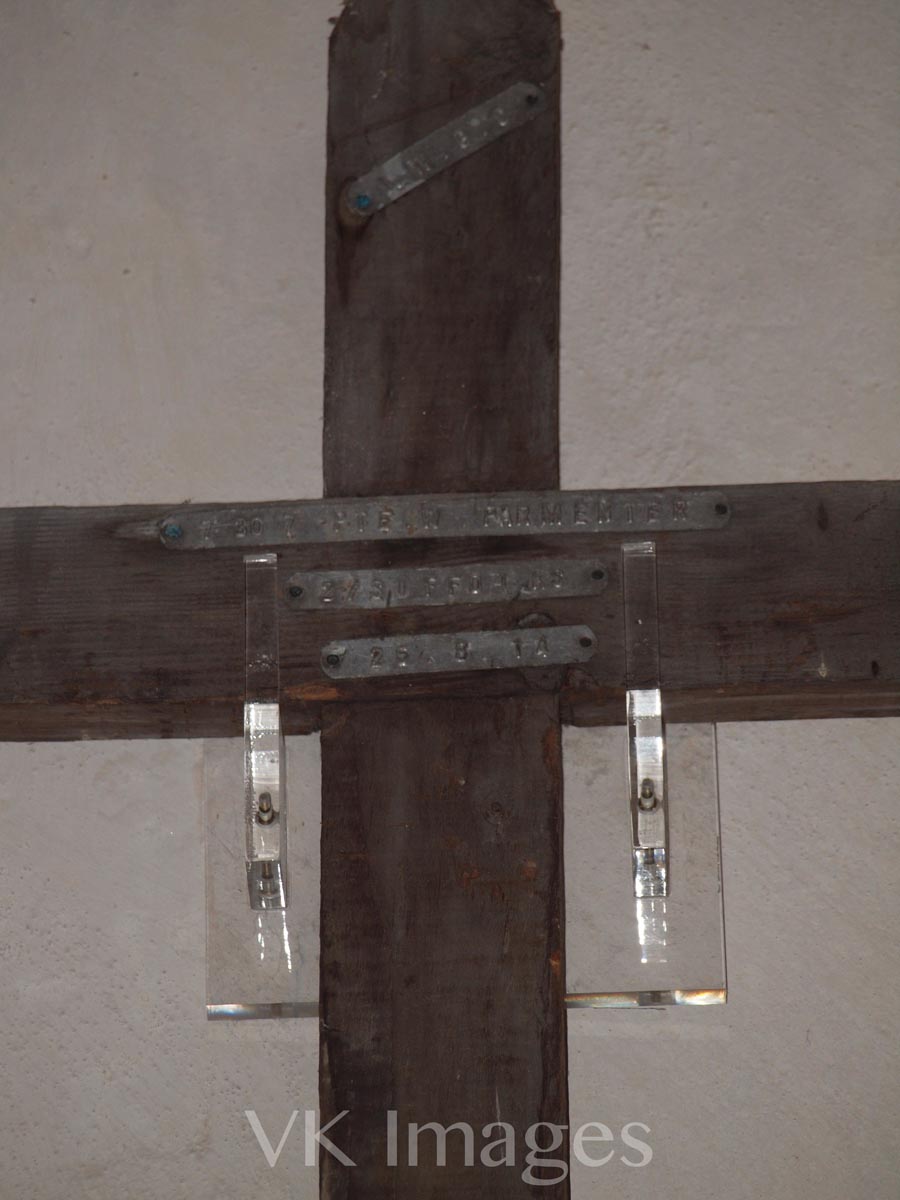 Other information
Mounting to wall: Held to wall by plastic bracket
Detailing:Top of marker and terminals of cross beam are slightly chamfered, base is pointed but broken.
Evidence of use in field (earth marking, cracking, staining, Surface insertion depth (into ground if apparent):Insertion marks up to about 200mm from base of marker, wood is stained as if been in the ground.
Finish (varnish, paint, oiled, unfinished etc): Unfinished
Condition (cracked, paint peeling, woodwork, damage etc): Good, some wear and tear for the marker of this early casualty of the War. 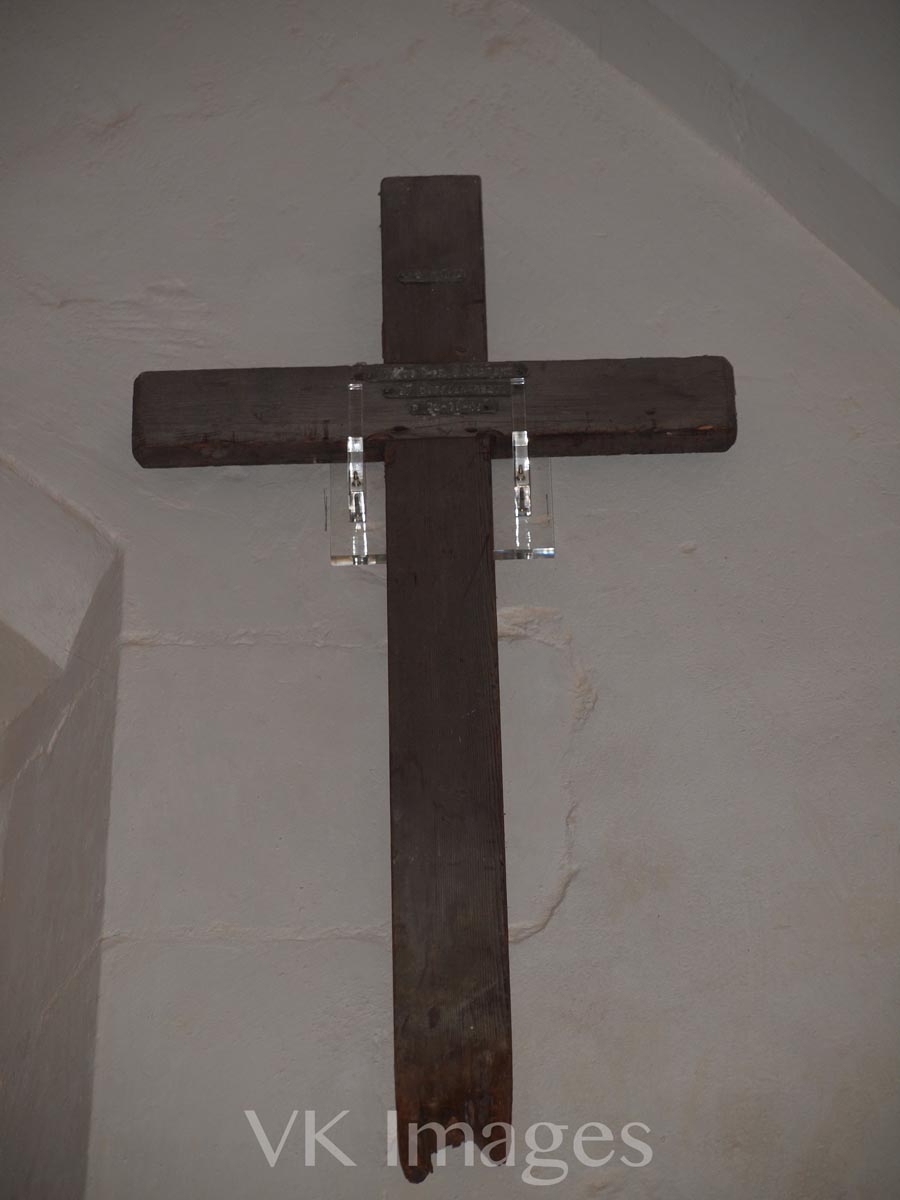 Other information
Mounting to wall:Plastic bracket
Detailing:Base broken off of marker, ends of shaft and cross beam sawn flat, no decoration.
Evidence of use in field (earth marking, cracking, staining, Surface insertion depth (into ground if apparent):Base missing, looks as though this is through water damage/rot
Finish (varnish, paint, oiled, unfinished etc): Unfinished
Condition (cracked, paint peeling, woodwork, damage etc): Apparent water damage to base, other than that fair condition. 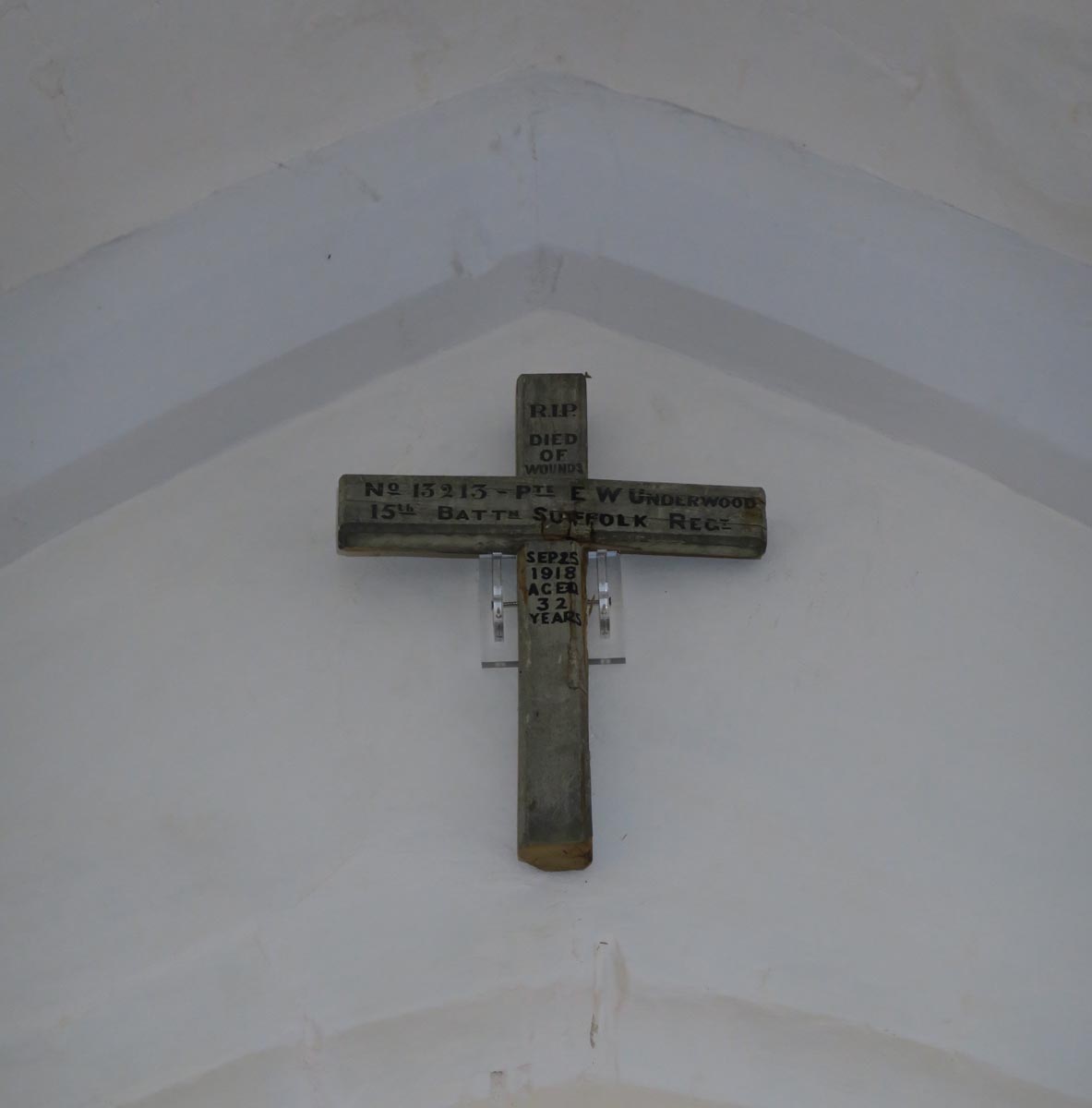 Notes and observations:
Frank Underwood joined the 9th Battalion, the Suffolk Yeomanry and arrived in France with them on 31st August 1915. At some point between May 7th 1918 and his death he was transferred to the 15th Battalion which had newly arrived in France from Egypt. He was wounded in action, probably at one of the actions in the Hundred Days, the Allied advance which led to the Armistice of November 1918.  He was transferred to a military hospital in England and died of his wounds on 25th September 1918. He is buried in Cavendish cemetery. 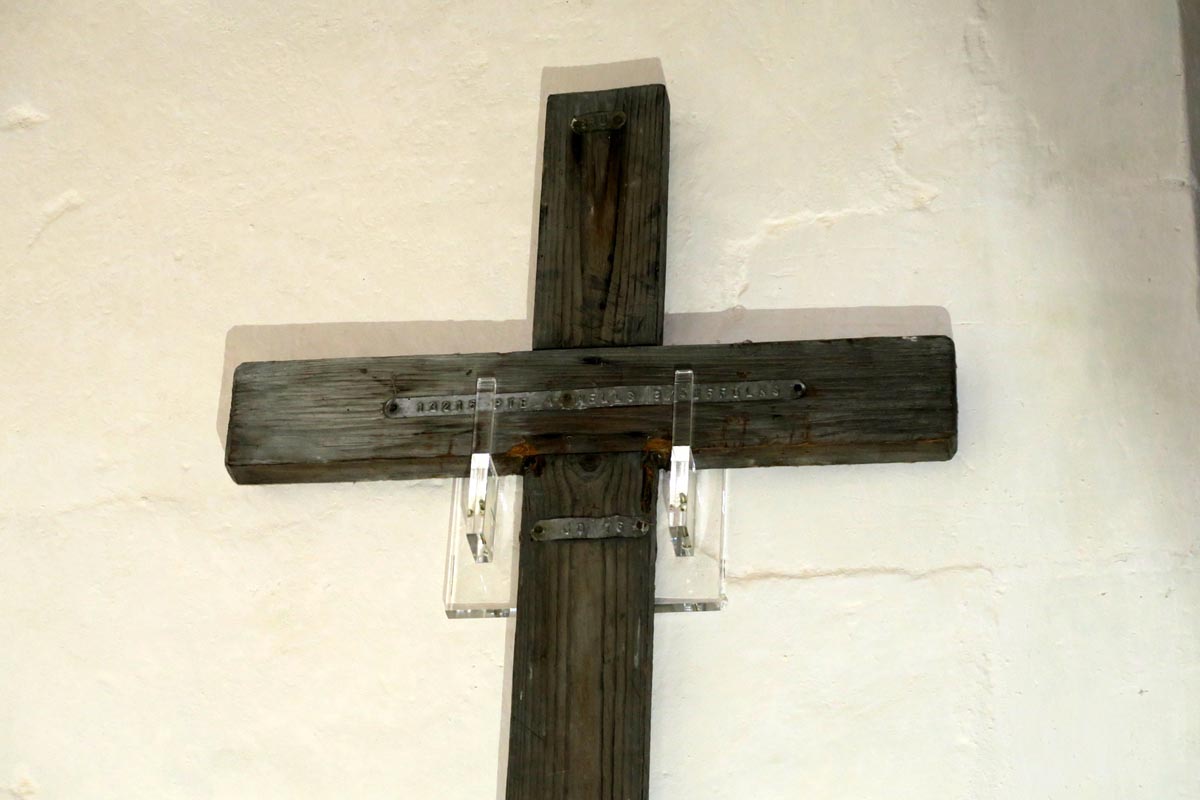 Notes and observations:
Arthur Wells joined the 9th Battalion, Suffolk Regiment. Given the closeness of their serial numbers it is probable that he arrived in France on 31st August 1915 with Frank Underwood. He was wounded on September 13th 1916 during the Battle of the Somme, possibly during a raid on the Quadilateral near Ginchy. He later died of his wounds and is buried in Guillemont Road Cemetery. 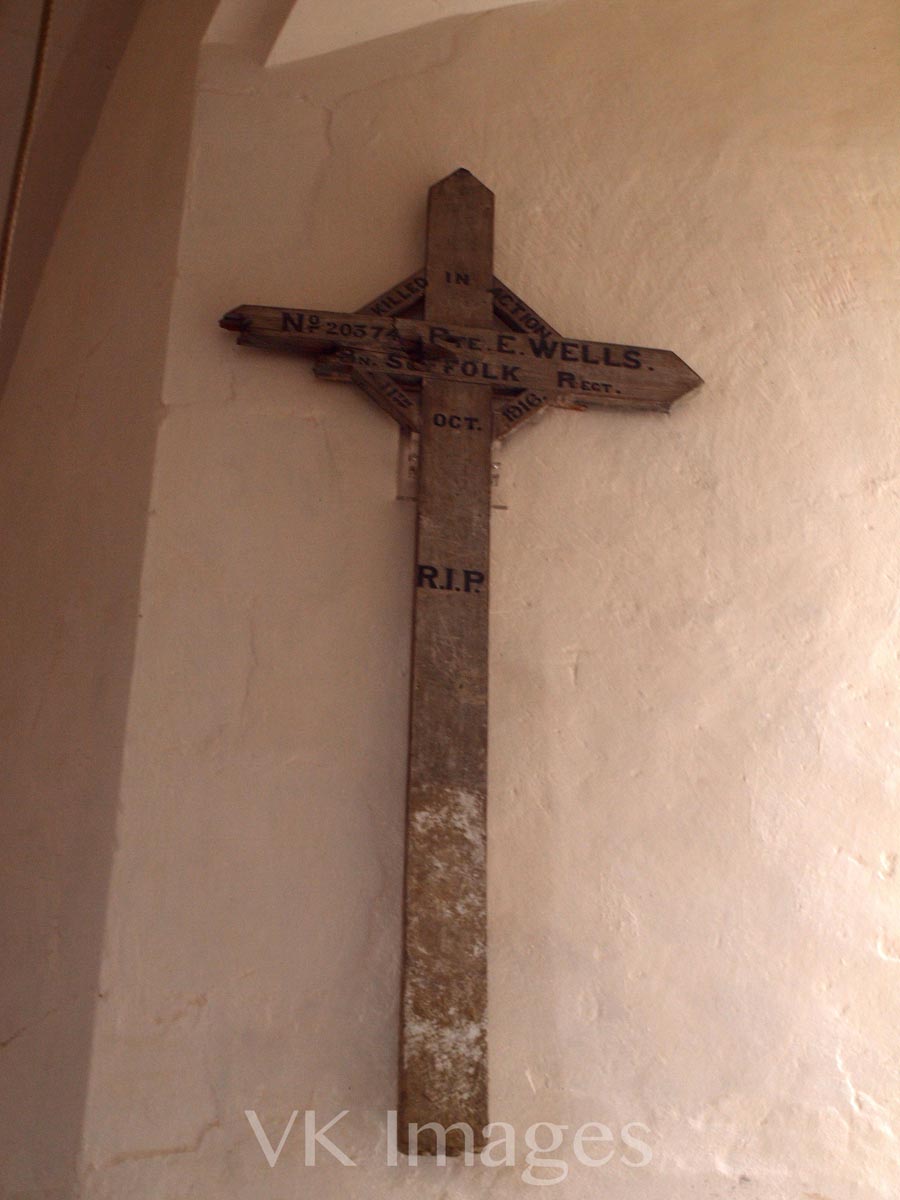 Cross dimensions (millimetres please)
Shaft Height:1480mm
Width of wood:100mm
Cross beam width: Unable to measure cross beam as marker was situated about 9 feet above ground level. Estimation that it is a quarter of the shaft height. +_ 370mm
Thickness or depth:25mm

Other information
Mounting to wall: Attached to wall by plastic custom made bracket.
Detailing:Tip of shaft and cross beam are pointed, base of the marker is cut across.
Left end of the beam is fragmented/splintered, which obliterates the battalion number. Also evidence of a possible bullet strike or fragment strike to centre?
Evidence of use in field (earth marking, cracking, staining, Surface insertion depth (into ground if apparent):Insertion depth of about 600mm, some staining to the wood, earth staining, possibly chalky marl.
Finish (varnish, paint, oiled, unfinished etc): Painted, this has hugely deteriorated over the passing years.
Condition (cracked, paint peeling, woodwork, damage etc): Other than end of beam damage and damage to centre of the marker in quite good condition, showing wear and tear befitting its years.

Notes and observations:
Access to the Markers is very difficult, there is a chap that lives across the Green from the church and has a key to access the markers, they are kept behind glass doors, you can view them, but not in any great detail. Access is by a passcode pad. Markers are on the wall of the base of the tower 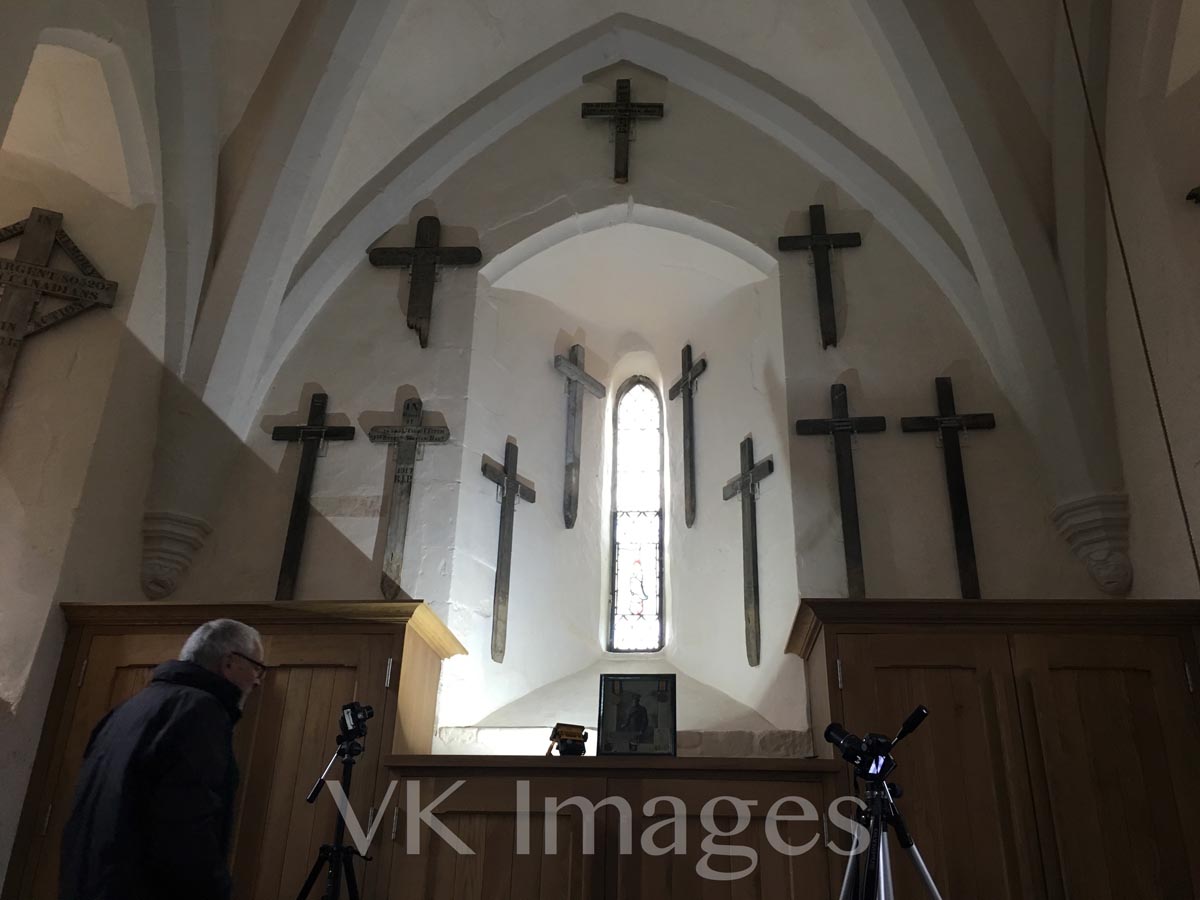