Other information
Mounting to wall: not mounted
Detailing: None
Evidence of use in field: cracking at the bottom. You can clearly see evidence of earth insertion.
Surface insertion depth: around 470 mm
Finish: unfinished wood.
Condition:  not in good condition. Half of the circle plate is missing. There is clear plastic thread binding the cross together.

Biographical information:
Lieutenant Colonel John Willoughby Scott, D.S.O, 3 times mentioned in despatches. Queen’s Own Oxfordshire Hussars commanding 8th Bn. Somerset Light Infantry, died 23.04.1917 near Arras. He was the son of Sir John Scott, K.C.M.G, D.C.L, and Lady Scott, husband of Madeleine E Scott of Tudor Cottage, Overthorpe. He was originally buried at St. Laurent Blangy Community cemetery but was reinterred after the armistice and now lies in Cabaret Rouge cemetery, Souchez. The 8th SLI’s war diaries between August 1916 and March 1917 are often written and signed by Scott. Although Scott’s battlefield cross is in Warkworth church, he is on the roll of honour in the church at Hinton in the Hedges, and there is also a plaque to him in another local church at Evenley, placed there by his wife who was the daughter of the local vicar. 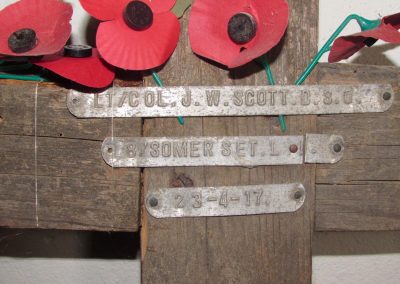 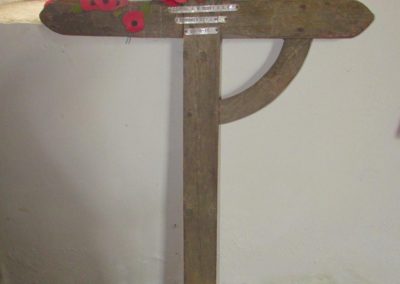 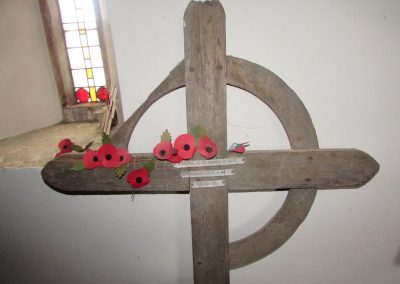 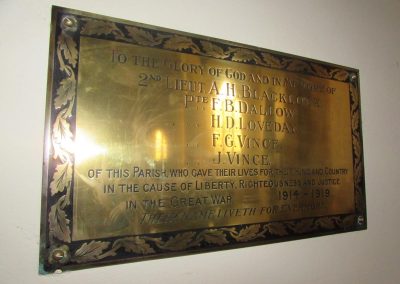 Other information
Mounting to wall: Not mounted
Detailing: none
Evidence of use in field: evidence of insertion into earth
Surface insertion depth: around 300 mm
Finish: unpolished wood
Condition: fair condition

Biographical information:
Algernon Haden Blacklock was born on 4th June 1894. He was the son of J. Herbert Blacklock and Julia Blacklock of Green Hill, Banbury. Born into a wealthy family he was educated at Eton. The 1901 census shows he lived at Overthorpe House with his family and a nurse, cook, several housemaids, grooms and a footman. His father was a magistrate.

2nd Lieutenant Algernon Haden Blacklock was killed at Le Maisnil on 21st October 1914, aged 20. He is buried at Le Trou Aid Post, Fleurbaix having been reinterred there after the armistice. He was identified by a “letter on his body.”

Interestingly, the hill from the village of Overthorpe to Banbury is called Blacklock’s Hill. The pub at the bottom of this ( now a tesco ) used to be called the Blacklock Arms. 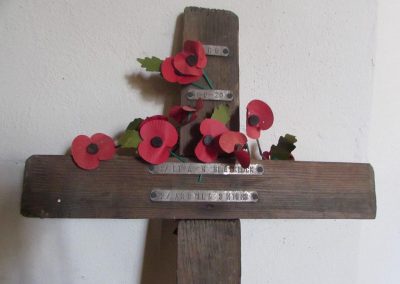 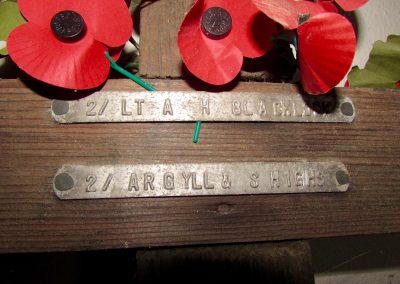 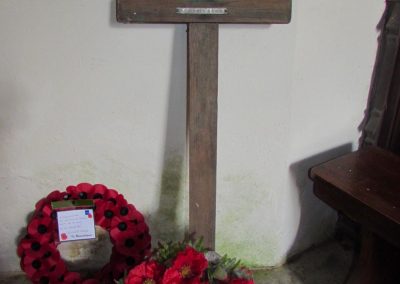 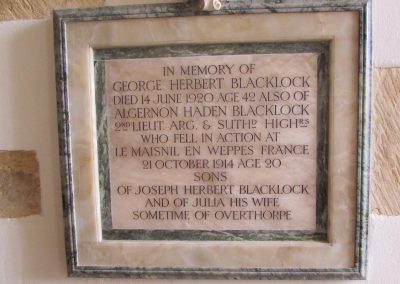