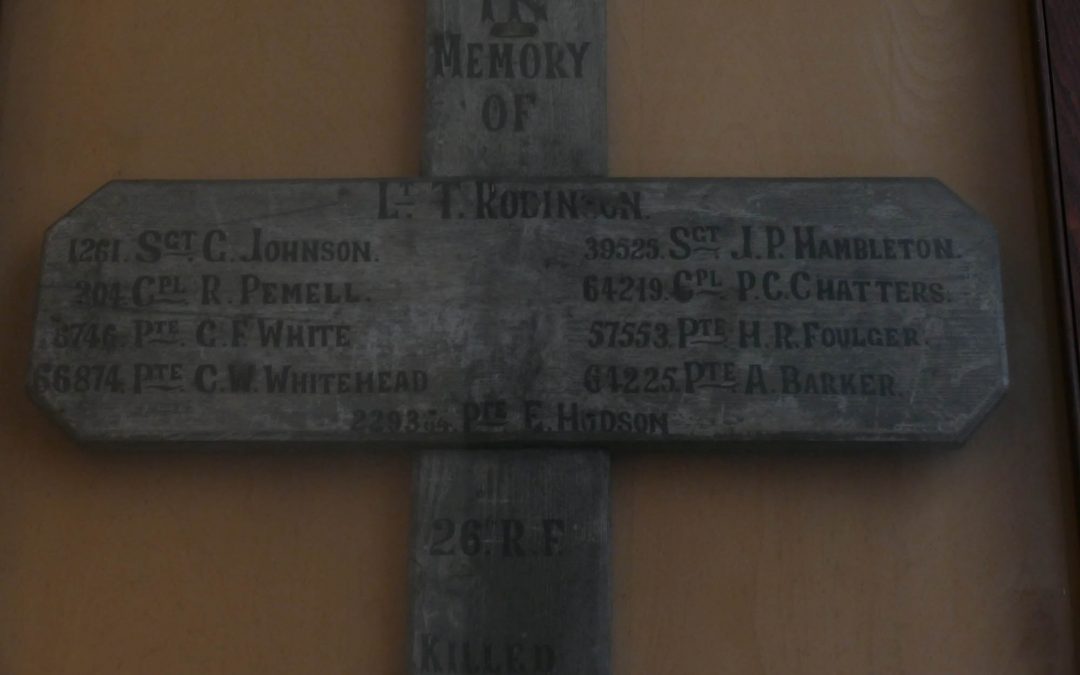 26th BATTALION ROYAL FUSILIERS BANKERS WHO GAVE THEIR LIVES IN THE GREAT WAR 1914-1918. 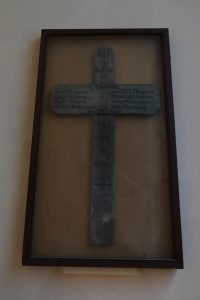 Other information
Mounting to wall: Cross is housed inside a glass framed box which is mounted on the wall.

Detailing: Edges of shaft and cross-beam are all chamfered with 45degree mitres at top of shaft and end of cross beam. The cross beam sits on top of the shaft with no obvious joint let into the wood. 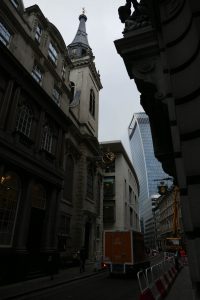 The cross is inside a Grade 1 listed Christopher Wren church. The church itself is no longer used for regular worship and is now occupied by the London Centre for Spirituality. It was bombed in both World Wars (in WW1 by a Goethe bomber) and there is a display of shrapnel from the WW1 bomb in the altar area. The cross is positioned high on the wall in an open office above the entrance doors.

There is a memorial to Geoffrey Anketell Studdart-Kennedy MC (known as Woodbine Willie) who was rector at St Edmund from 1921 to 1929. There is also a stained glass window TO THE GLORIOUS MEMORY OF THE OFFICERS NON-COMMISSIONED OFFICERS AND MEN OF THE 26th BATTALION ROYAL FUSILIERS BANKERS WHO GAVE THEIR LIVES IN THE GREAT WAR 1914-1918.

The 26th Battalion RF was known as the Bankers Battalion as it recruited its soldiers from the Banking community. Major Etchells of the 26th Battalion requested that the window be placed in the church as it was in the heart of the community from which the men had been drawn. ‘The men who had worked, fought and then died together were commemorated close to where their surviving comrades continued their lives.’ ‘…special permission had been granted to use the coat of arms of the City of London in the glass and the stained glass borders displayed the badges of the ten great banking firms which had provided the men for the battalion.’ 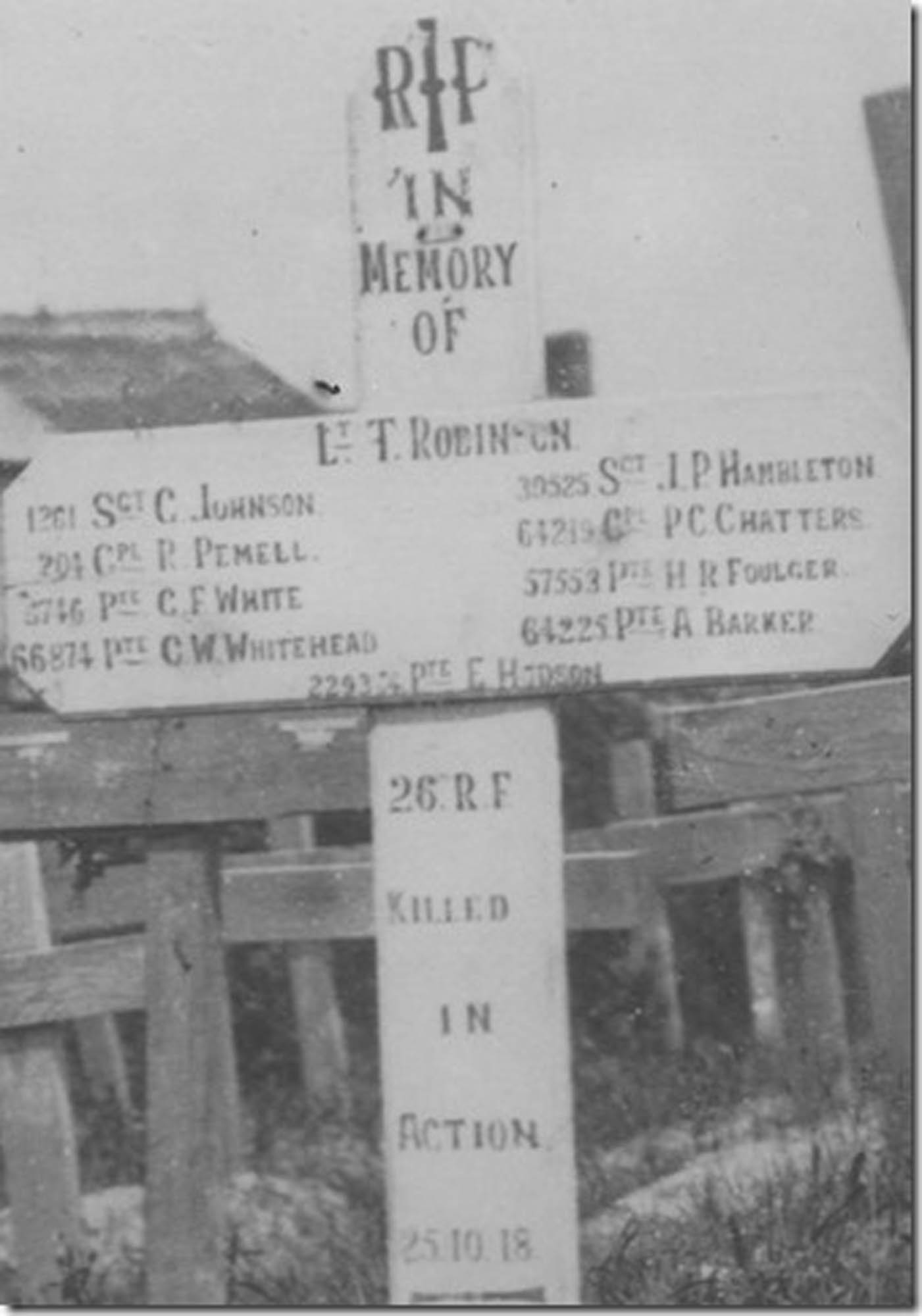 The Battalion War Diary has the following entry for 25 October 1918.

“At 01.15 the Battalion concentrated its assembly along the road running through O.6.b (&?) O.6.a – O.12.a.3.9, and proceeded to dig in until Zero hour. The enemy kept up moderate dispersed shell fire during the night, only slackening down after dawn. At 09.00, on the commencement of our barrage, the whole line closed under the barrage and moved forward at 09.04.

The enemy appeared to have withdrawn his front posts to a depth of about 400 yards on our immediate front, and relied upon a barrage to break up our advance. Heavy casualties were suffered on passing through the barrage, four officers being wounded in the first five minutes. There was also fairly heavy machine gun fire from both flanks, which increased as the advance continued, Machine Guns coming into action from the Farms and High Ground around P.7.c. and P.7.d. The Windmill at P.7.d.2.4 especially causing casualties as the Battalion entered the village round P.7.c.6.4. Tp silence these enemy Machine Guns the right front coy worked round to the Right Flank into dead ground along the road from P.7.c.6.4 to P13a.7.9, passing into 20th Bn. D.L.I. front for this purpose, and two Vickers guns attached to the Battalion brought fire to bear from the Right Flank, while the left flank pushed steadily ahead over the KASSELERYBEEK up the higher ground in P.7.d. There were three more casualties to Officers and several to men, but by 10.30 the village and windmill had been taken; from the windmill itself one enemy machine gun and sixteen men were captured.

From 10.30 to 12.30 re-organisation wherever possible took place in dead ground, and the line held by the Battalion was a s follows:-

This was a line approximately 1000 yards short of the first pause line, but enemy Machine Gun fire was very accurate and casualties had been severe. It was necessary, therefore, to reorganise before pushing forward.

At 12.30the advance was recommenced. On the right a composite company was made out of “A” and “C” Companies owing to the casualties to Officers and men, and a determined effort was made to penetrate enemy positions by means of infiltration on both sides of the windmill took place. At the same time “B” and “D” Companies attempted to work forward into P.8.a and c. This attack on the left flank penetrated as far as OOTECHEM, but the casualties were too heavy to admit further progress. At the same time the Camerons on the left were ordered to retire, and. In conformity with them, the Left Companies of the Battalion swung back and eventually took up their positions alon the road at the forward crest at P.7.d.9.3 to P.6.e.7.7

On teh Right Flank the Composite “A” and “C” Company were also met by extremely accurate Machine Gun fire in their attempt to move forward. The sections sent around the left of the windmill were unable to move forward and were withdrawn and sent around the right flank to rejoin their platoon, and together these sections penetrated as far as P.13.a.5.5, beyond which point further progress was impossible.

As the point reached by the Battalion was on the 20th Bn. D.L.I. front and machine gun fire from P.14.a and b began to die down, O/C “A” and “C” Company ordered his Company to sidestep a distance of 300 yards, and at 15.30 this was carried out by sections and a position at P.13.b.8.8 was occupied. In doing this Machine Gun fire was drawn from the left i.e. the Eastern slopes of OOTECHEM, and the men commenced to dig in.

At this point the Commanding Officer was wounded while re-organising the line of the left flank, and Captain A SPOTTISWOODE took over command of the Battalion. This was at about 16.00 and at dusk the 10th Bn. “Queens” R.W.S. Regt. passed through the 20th Bn D.L.I. and by dark had reached P13.b.6.6 with their left resting on P.7.d.6.0. “A” and “C” Company were then ordered to withdraw and move forward to fill the gap between P.7.d.9.3 and the “Queens” left flank at P.7.a.6.0 a continuous line being established.

During research a photograph came to light of the cross in situ on the field (I believe this is a part of a larger photo).

Biographical details of those listed on the cross are as follows

Thistle (Jerry) Robinson MC Age 26. Youngest son of Sir Richard and Lady Robinson of Putney and Whitby. Attended St Paul’s School, London and Corpus Christi College, Oxford. He was twice wounded and was subsequently employed as an instructor whilst recovering, but gave up this position in 1917 to return to the front where he served in Italy before France. All three of his brothers also served , one dying at Gallipoli..

A letter written to his father by the General Commanding the 41st Division, said “I wish to place on record my appreciation of the gallant conduct of Lieut T. Robinson, R.F., on October 14, 1918, during the advance north of Menin, when he silenced and captured some enemy guns, thus enabling the line to advance.”

His C.O. wrote “He was killed whilst leading his men in an attempt to clear an enemy post that was holding up the advance of his company. The men who were with him are loud in their praises of his gallantry and unselfish devotion to duty, and I know from my long association with him they do not overestimate his qualities of leadership. We were all proud of him, and I assure you that the loss that you must feel deeply is shared by all his brother officers and men who knew and served under him. … He had a very trying time earlier on, and I thought in this attack he would not be able to face the line again; but he was most persistent and anxious that he should come. How well he did, and what an example through all the fierce fighting which led to the Armistice, through those who saw him can know. I sent in his name for the M.C. before his last battle – no one ever carried it better. Those of us who fought will never forget the names and deeds of men like your son, who made this peace possible.”

Note: Service number seems to have been erroneously listed on cross as 39525 rather than 35925 which caused some confusion to the GRU.

Note: Service number erroneously listed on cross as 204* rather than 89971 which caused some confusion to the GRU

George Frederick White Born in Walberton and enlisted in Chichester. Next of Kin resident in Slindon.

Another where there is a discrepancy between the cross and the CWGC records regarding service number. It appears that Whitehead’s and Barker’s numbered were transposed on the cross.

See Whitehead re confusion over service number. The award of the MM was announced in the London Gazette on 17 June 1919.  It may be that this was won in the same action as Thistle Robinson’s MC.

Two other soldiers of the 26th Battalion who fell that same day are buried in Vichte Cemetery a few miles to the north.