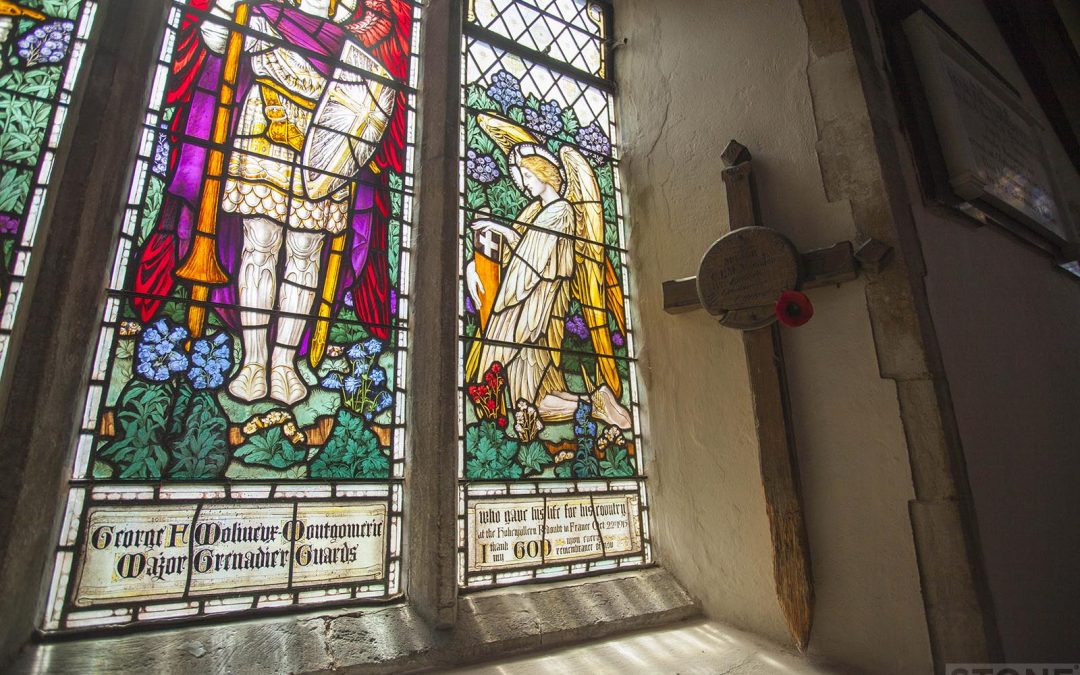 Text type: GRU cartouche and tag to head of cross. A combination of a hand-painted serif in circle and rather beautifully rendered cursive script. The lettering is slightly raised; it would appear this is due to the unpainted wood shrinking as it dried after being in the field.

Circle plate (if celtic type) A solid circle of wood is affixed to the front of the cross central to the join.
Outer diameter: 225mm in diameter
Width of circle: n/a
Thickness: 25mm (approx)

Other information
Mounting to wall: hidden screws and wire.
Detailing: the cross has finials, these are carved into the wood. Facing the marker the left hand finial has been snapped off.
Evidence of use in field (earth marking, cracking, staining, shrinkage): The wood shows signs of shrinkage and rot whilst it was in situ.
Surface insertion depth (into ground if apparent): 250mm approx
Finish: The wood is planed and shows signs it may have been waxed at some point in the past, this may not be contemporary with the cross.
Condition: One finial is missing as noted above. The marker is in overall solid condition some signs of old worm holes, the base has rotted consistent with it’s use in the field, the wood is however dry and stable. There is a horizontal crack running across the disk of the wheel/disk which looks like it may have been caused by the cross being struck as it radiates with the grain from a chunk of missing wood. This could just conceivably be field damage due to conflict/sphrapnel, but equally could be post war damage in transit or more contemporary.

Other information, notes and observations:
Garboldisham st John has two churches, one of which, All Saints is a ruin. St John shows signs of some rich patronage, it is a rather beautiful building, immaculate both inside and out, which shows signs of a lot of continuing love and use in the community.The Victorian and early twentieth century stained glass is exquisite, designed by J Powell & Sons’ workshop by J W Brown (the designer). One window; the one next to the cross specifically remembers George Montgomerie. It is marked: 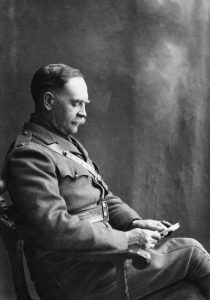 The Union flag and Red cross flag above the wooden war memorial in the chancel are said to have come from the medical post where Frederick was treated for the head wound that killed him. It is impossible to ascertain if this is in fact the case although the condition of them would indicate some age.

The Molineux-Montgomerie family were the owners of the Garboldisham Estate, the church correspondingly has other dedications and memorials to members of the family, one of whom was also a rector at the church. The family can be traced back through the lines of peerage, it would appear that the family fortune came from the Slave trade in St Kitts and Antigua.

Frederick was 46 when he died on 22 October 1915. The Son of Cecil and Sybil Molyneux-Montgomerie, of Garboldisham Old Hall. He is buried at Vermelles British Cemetery. He was married to Sybil Mary Blanche Somerset they had two daughters Violet Beare Molyneux-Montgomerie who died in infancy and Rosemary Heartsease Beare Molyneux-Montgomerie (born 23 Jun 1908). Frederick was a Mason and a professional soldier, signing up in 1889 with the Grenadier Guards until 1909. Called out of the reserve in 1914. He is also remembered on the War memorial at Lords Cricket Ground.

His CWGC gravestone at Vermelles reads

21 October 1915
Improved fire trench and continued sapping on KAISERINE TRENCH. Enemy snipers active. We accounted for 3. Major Montgomerie (the author of this diary) was shot through the head and killed on the night of 21/22 whilst superintending work on KAISERINE TRENCH under heavy fire. K 4 W 9 M -Sap completed to join with 1st Guards Brigade.

There is also a brass plaque to all the men of the parish who died, accompanied by photographs, a wooden war memorial board and a brass plaque to Arthur Clare Atkins Gunlayer sergeant 1st class who died at Jutland when HMS Indefatigable was sunk on May 31st 1916 (Pictured in the gallery below) 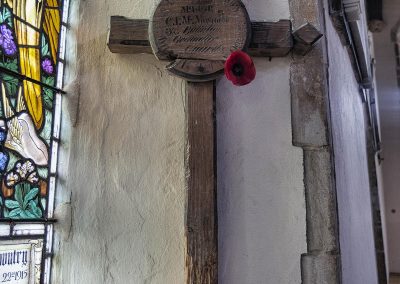 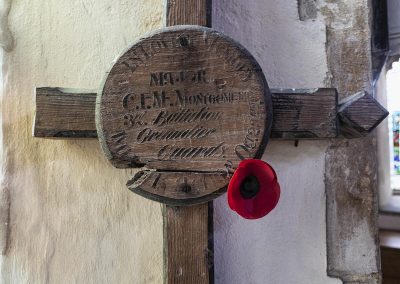 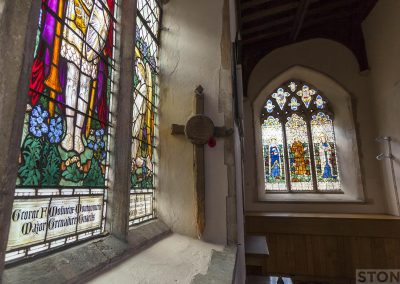 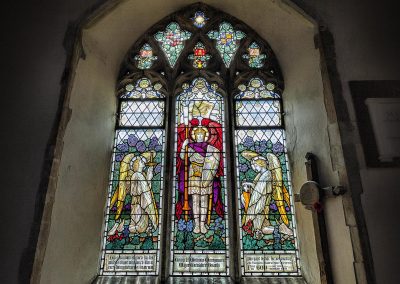 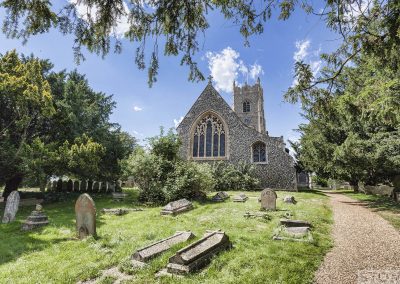 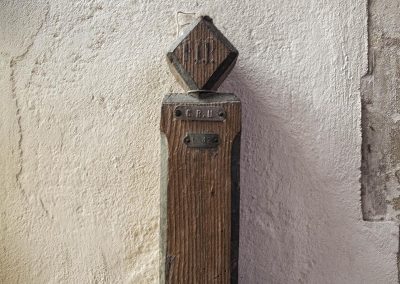 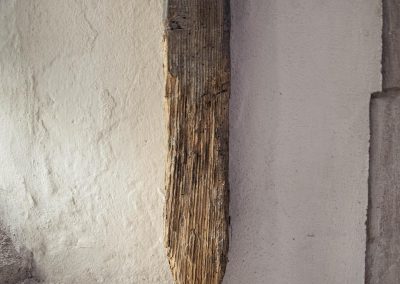 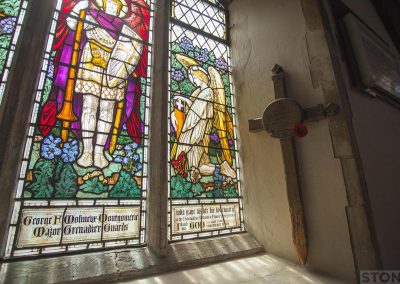 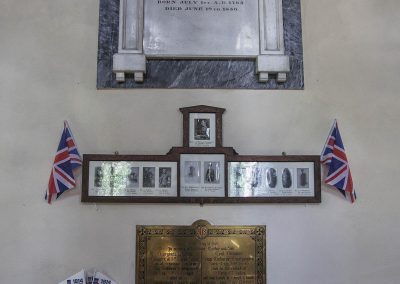 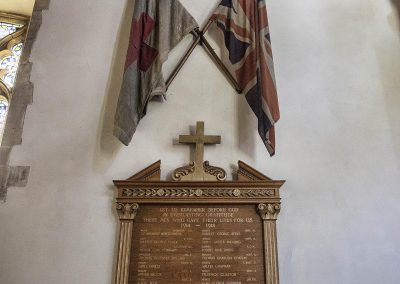 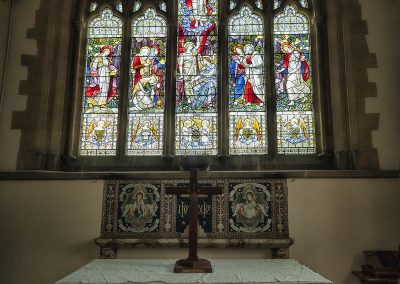 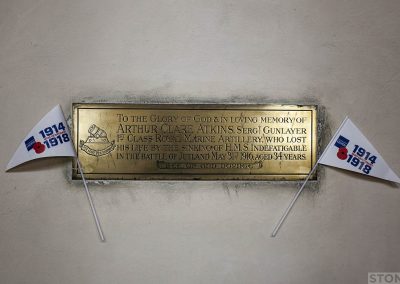 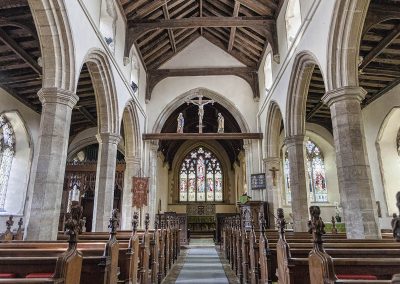