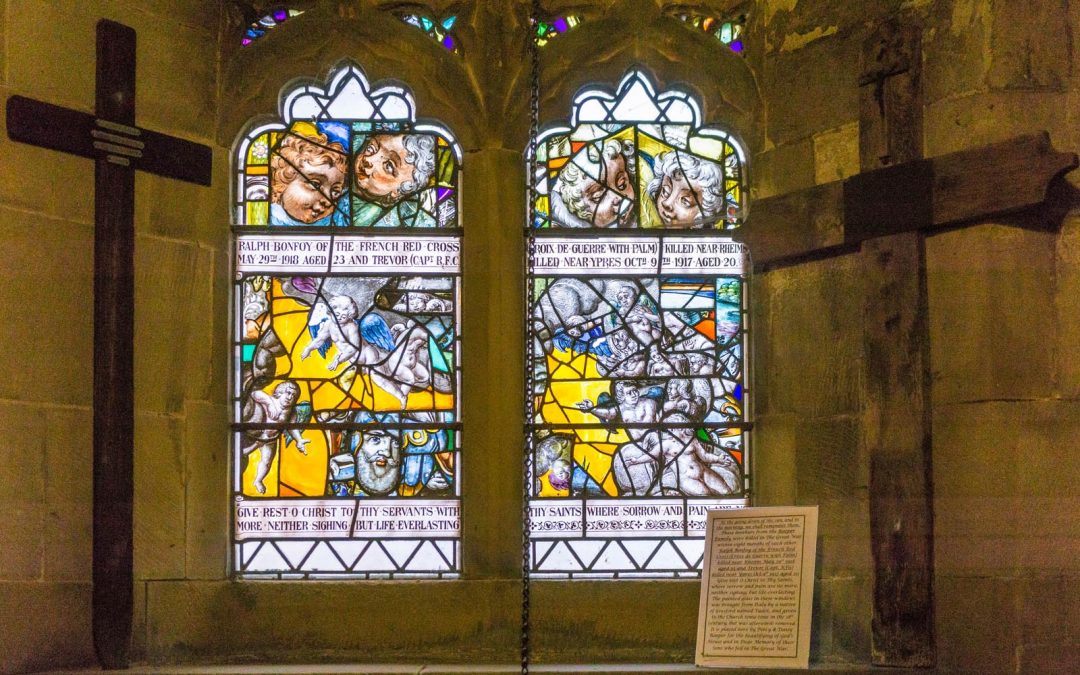 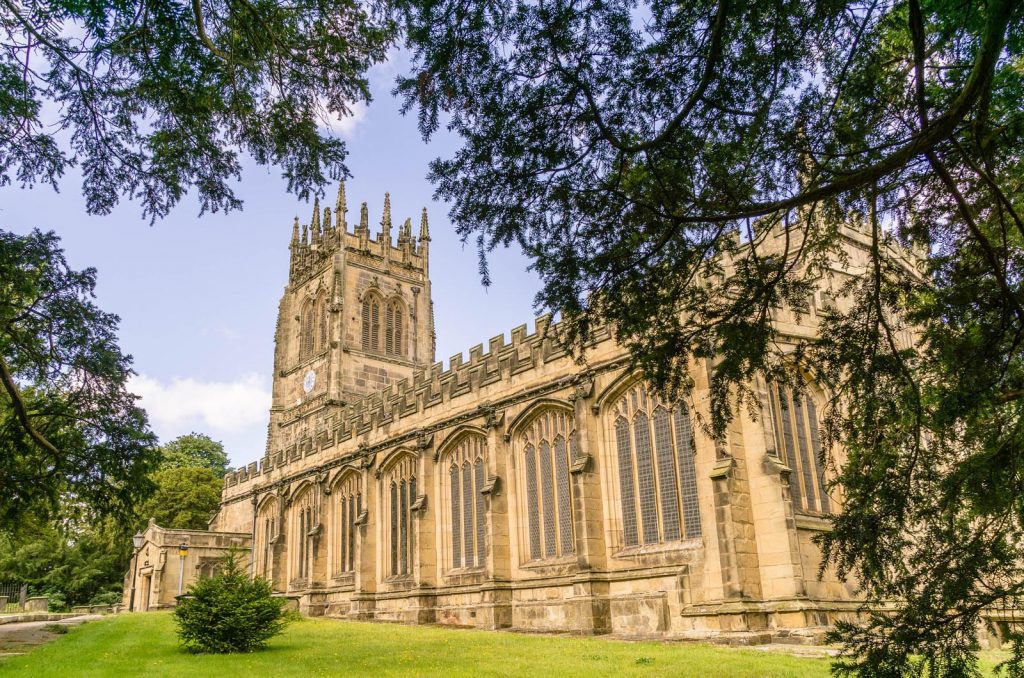 At the top of the cross there is attached a small cross of the crucifixion.

There is a plaque nailed to the cross member with the details :- 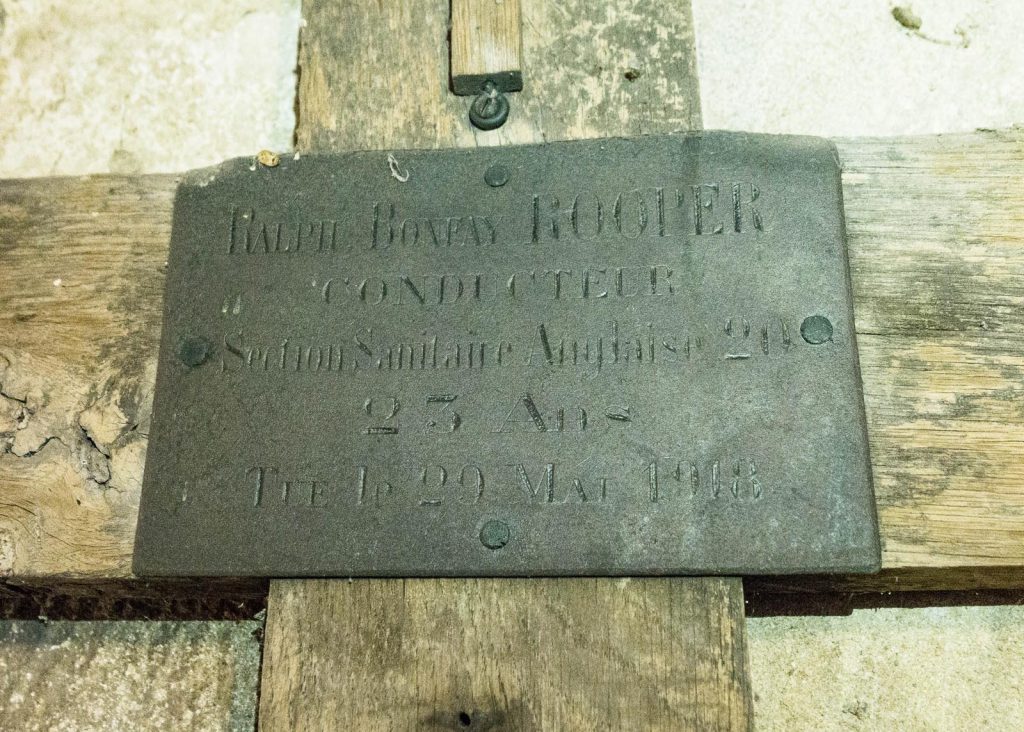 Other information
Mounting to wall: Nailed to the right hand side of a window in the south porch
Detailing: The cross is pointed at the top of the shaft and at either end of the cross member, it is straight at the end of the shaft
Evidence of use in field (earth marking, cracking, staining, shrinkage): There is discolouration and staining at the end of the shaft.
Surface insertion depth (into ground if apparent): up to 380mm
Finish (varnish, paint, oiled, unfinished etc): Light coloured no obvious staining
Condition (cracked, paint peeling, woodwork, damage etc): In reasonable condition some splitting at the end of the shaft.

Biographical notes and observations:
He was the 2nd son of Mr. Percy L. and Mrs Alice Nancy Rooper (nee Royden)of Little Court, Speldhurst, Kent, born at Chester the family lived in Gresford, Nr. Wrexham until 1916 when they left for Kent. He was educated at Charterhouse school and was an undergraduate at New College Oxford, he knew Robert Graves, who visited him at Gresford. Ralph was rejected from the Army because of his health, it is also suggested that he was a conscientious objector. He joined the friends ambulance unit in April 1915 and was a driver for the British( later French) Red Cross Society. He was killed in action at Guess nr. Rheims France on 29.5.1918. He had been awarded the Croix de Guerre with Palm (France). He is buried in Marfeux British Cemetery. Grave ref No. V1.E.6. 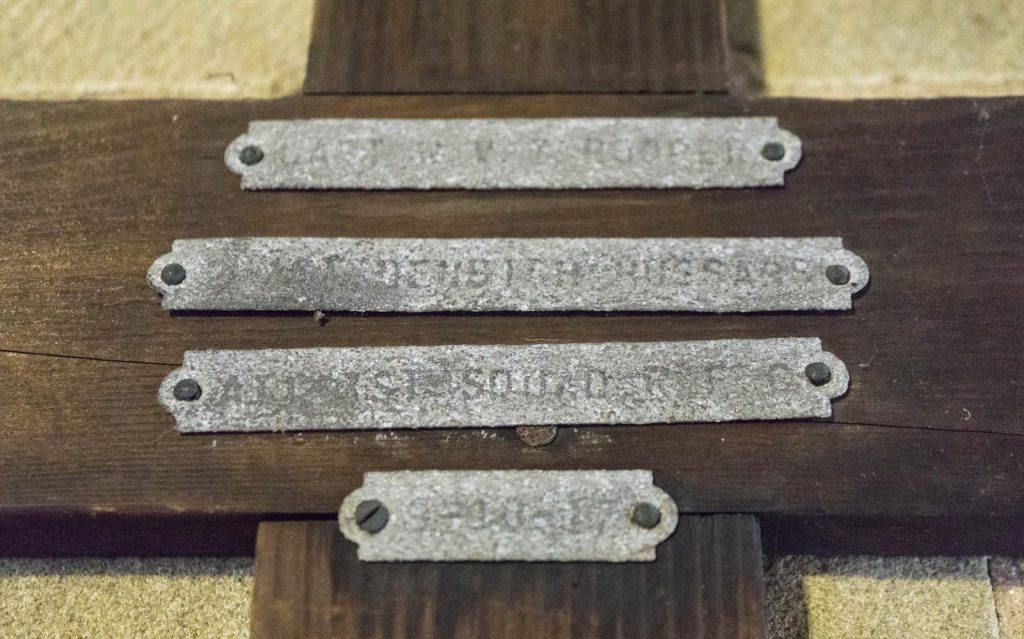 Other information
Mounting to wall: Nailed to the left hand side of a stained glass window in the South Porch.
Detailing: Standard British Cross shaped to a point at the end of the shaft.
Evidence of use in field (earth marking, cracking, staining, shrinkage): The end of shaft slightly lighter shading where been in the ground
Surface insertion depth (into ground if apparent): Up to 100mm from end of shaft
Finish (varnish, paint, oiled, unfinished etc): Dark stained
Condition (cracked, paint peeling, woodwork, damage etc)In good condition.

Biographical notes and observations:
He was the youngest son of Mr. Percy L. and Mrs Alice Nancy Rooper (nee Royden) (she was the daughter of Sir Thomas Royden – Shipowner and Conservative MP for Liverpool Toxteth West. They lived at Frankby Hall on the wirral. Now a country park and cemetery. The hall still stands, there is a chapel inside where burial services can be held.) of Little Court, Speldhurst, Kent, born at Chester the family lived in Gresford, Nr. Wrexham until 1916 when they left for Kent. He was educated at Charterhouse School, The brothers are commemorated at Charterhouse school and on the memorial in Speldhurst Kent. More info at www.church.speldhurst.org. William Victor Trevor Rooper more info on Wikipedia, was a pupil at Rolls Royce motors Derby at the outbreak of war. He enlisted shortly after in the Denbighshire Yeomanry when only 17 and served as a motor cycle despatch rider for 5 months.

In december 1914 he was commissioned as a 2nd Lieut. in the Denbighshire Hussars(Territorial Force) he was seconded to the R.F.C. in Sept 1916, was made an acting Capt. in Aug 1917. He was shot down on 9th Oct 1917 over Polygon Wood crashing near the british lines. He is buried in Bailleul Communal Cemetery, Nord, France. Grave ref no. III F 43. He was awarded the Croix de Guerre (Belgium). All Saints Church is an interesting 13th century church, in the lady chapel is stained glass window from 1498. Other stained glass is from the 1500. There is painted Venetian glass in the south porch, brought from Italy, which the Roopers’ parents dedicated to their sons. They had a 3rd son who survived injury and returned from the war, his son the namesake of Ralph Bonfoy Rooper…Ralph Bonfoy Rooper (DSC) Lieut. Royal Navy H.M.M.T.B. 417 was killed on 16.3.44 buried in Bergen general cemetery Noord Holland.

There are quite a number of commemorations around the church to the Egerton family of prominence in the area. Particularly poignant is the loss of 3 brothers in the great war Robert Randle Egerton K.I.A 16 Nov.1914, Philip Graham Egerton Died of wounds 18 Oct. 1918 and Brian Raleigh Egerton K.I.A. 23 Oct 1918 – Great Grandsons of William Egerton Esq., of Gresford Lodge. The porch at the entrance to the church was dedicated in 1920 in memory of the men of Gresford who gave their lives in 1914 – 1919 war also 1939 -1945 war. There are 6 WW1 burials in the churchyard of men who died while at home. More info at www.historicalgems.co.uk

When visiting this church originally we were unable to find the crosses as they were locked in the south porch. With sincere thanks to Rev Anthony Dutton of St. Johns the Evangelist church , Great Sutton who found the crosses and Fr. Tudor Hughes of the church who met us there, showed us around and told us some of the history of the church. Without there help we would not have been able to do this report. The church is open most mornings and is well worth a visit. The bells are one of the 7 wonders of Wales 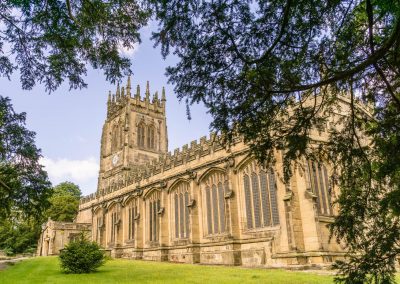 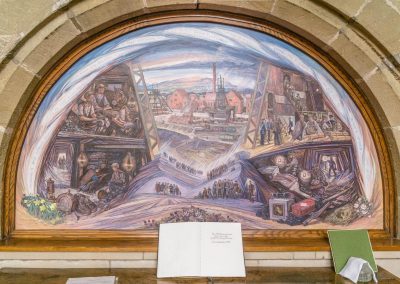 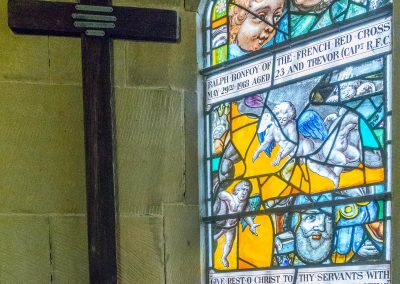 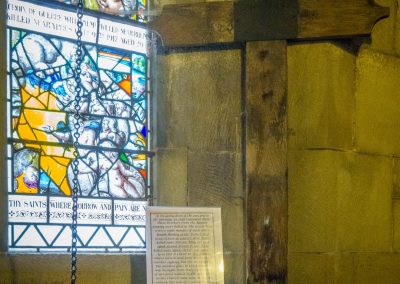 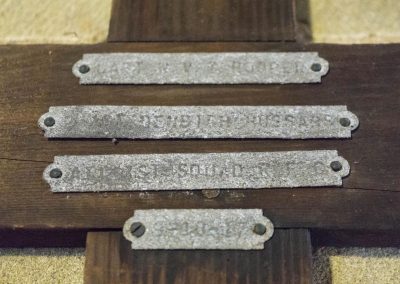 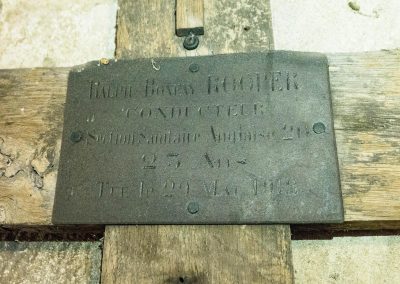 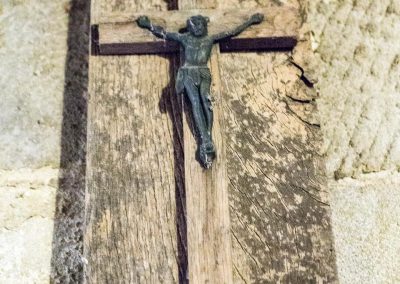 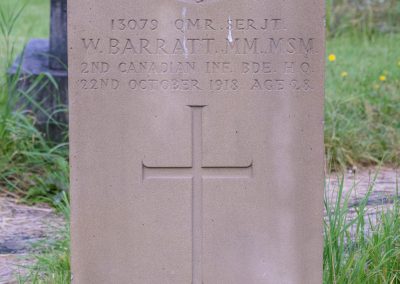 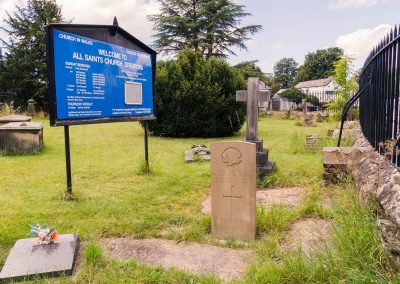 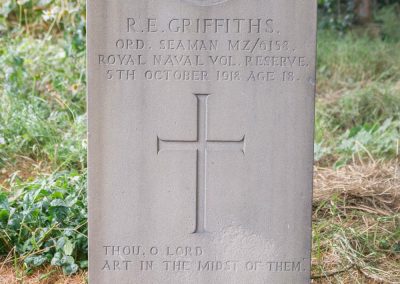 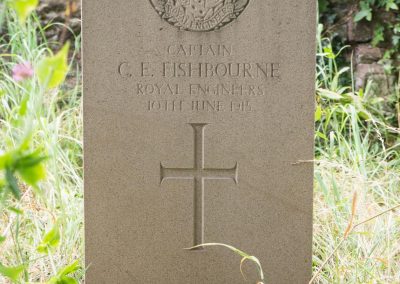 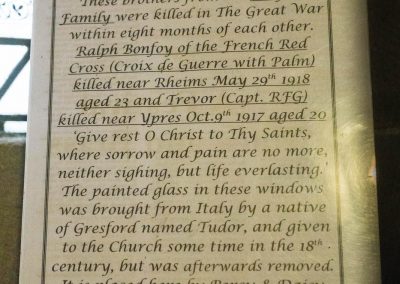 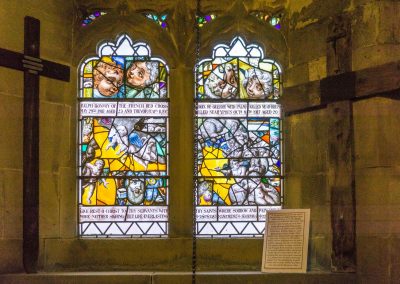 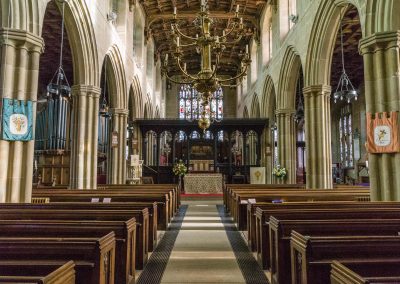 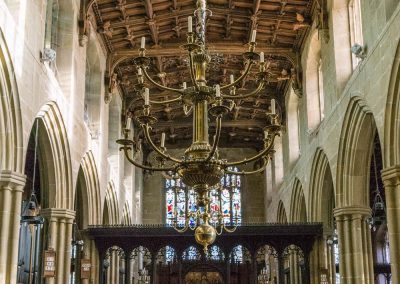 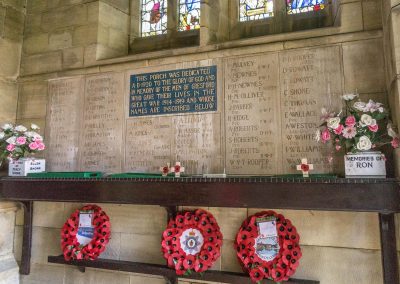