Hammersmith, The Church of The Holy Innocents, London 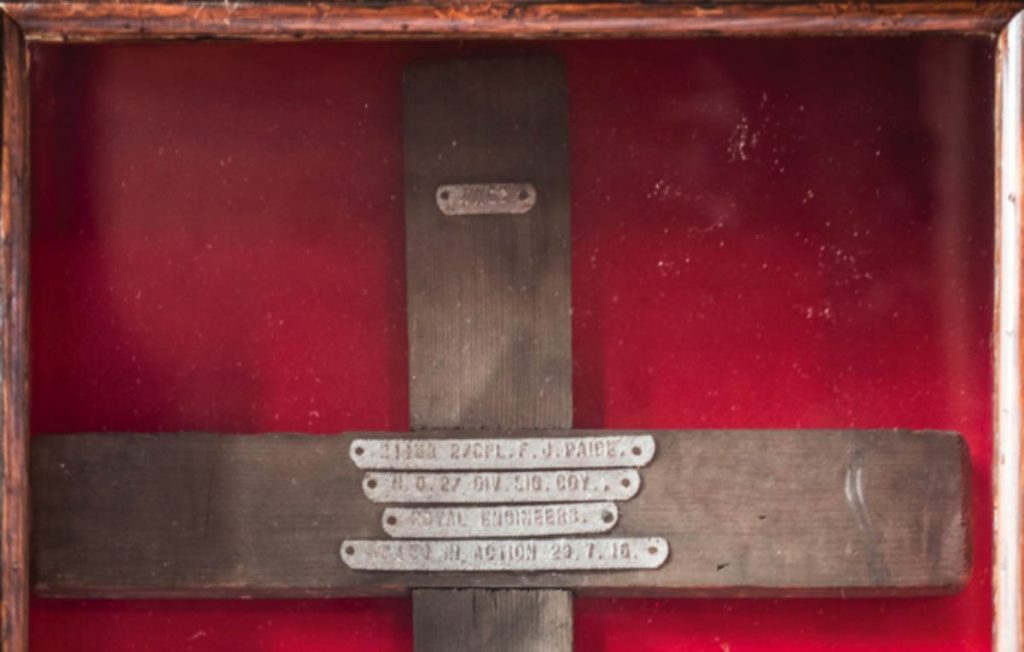 Notes On The Wooden Cross From The Grave Of Corporal Paice 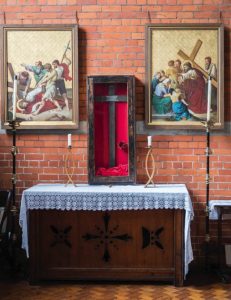 The Commonwealth War Graves web site confirms the information given on the metal strip fixed to the Cross, that of Corporal Frederick John Paice, serving with HQ 2nd Division Signal Company

Royal Engineers, died on the Somme on 29th July 1916. The web site adds that his grave is at Bonfray Farm Military Cemetery, Bray-Sur-Somme. Details of the Cemetery, which was like many others, was designed by Sir Edwin Lutyens.

The Commonwealth War Graves Commission at Maidenhead confirm that the zinc strip with the initials WGC at the top of the wooden cross indicates that it is one of the Commission’s crosses which were placed on all war graves from about 1915 and which remained there until the 1920s when the builders and stonemasons were able to complete the cemeteries which are a familiar sight on the battlefields today. The Commission also confirms that there was a scheme under which next of kin were offered these wooden crosses when they were no longer required, although details of the scheme are sketchy.

The 1901 Census reveals that Corporal Frederick J. Paice was born in 1894, and so he was 22 when he died on the Somme. He was the second son of Henry Paice (b 1863 in Hammersmith) and Kate (b 1864 in Christchurch, Hampshire). They lived at 74 Dalling Road which still stands, a few doors from the junction where Glenthorne Road meets Dalling Road, on the Church side of the junction. In 1901 Henry Paice was an upholsterer and it is possible that he worked on the ground floor of the house which has a shop front window, now modernised.

One can only speculate about how the cross came to the Church. Perhaps the father and mother wanted it to be there when they received it in the 1920s; perhaps when the parents died the children gave it to the Church. The Church records hold no clue.

It seems unlikely that Frederick left any descendants. A soldier who was on active service would normally have nominated a next of kin to receive any outstanding pay and his personal belongings. Unfortunately a very large number of these records were lost when the National Archive’s repository was hit by an incendiary bomb during WW2. It seems that Frederick’s records were lost in the bombing. As I am unable find a marriage certificate for him I suspect he was still a bachelor when he died aged 23.

The Paice’s eldest son, Henry Francis was born in 1892 died 11 June 1967, East Cowes, Isle of Wight. The youngest son, Charles Harry was born in 1897, died in a mental hospital March 1971 on the Isle of Wight. There were two daughters, Winifred May born 11 May 1895, died 24 May 1961, Ryde, Isle of Wight and Rose Frances born in 1900, died of consumption in 1911 in Hammersmith. His father Henry Francis Paice was born in Newbury, Berkshire in 1862 and died in Hammersmith in 1915. His mother Kate Elizabeth Bown was born in Christchurch, Hampshire in 1863, married in 1892 and died in Hammersmith in 1932. In 1923 his mother and her three surviving children were living at 58 Tabor Road, Hammersmith. The nearest I can find to a marriage is that of Winifred May. When she died in May 1961, the probate entry for her estate is indexed under “Henning or Paice”. It is clear from several pre-war London electoral rolls that she had assumed the surname Henning before 1928, and lived for many years with Frederick Charles Henning as man and wife. But I can’t see that they were ever formally married, although her probate entry describes her as a widow and her death was registered under the Henning surname. Obviously the relationship was long lasting since when Frederick Henning died in 1958 he was living at 2 Wray Street, Ryde on the Isle of Wight, and Winifred was living atthe same address when she died 3 years later. I can’t find any reference to any children either under Henning or Paice, and probate was given to her brother Henry Francis to administer her estate, which again indicates that she was childless.

NB: The Paice Cross was found pushed behind a pipe in the boiler room beneath the Church in 2006. There is no knowledge of how it came to be there or how it came to the Church. It is possible, since the family lived locally they gave it to the Church for safekeeping and in remembrance of their son who was buried in France. The case in which the Cross is displayed was made by Michael Dennis reusing a damaged cupboard from St John’s, Glenthorne Road. The poppy beside the Paice Cross was donated by Nick and Caroline Gordon and family.