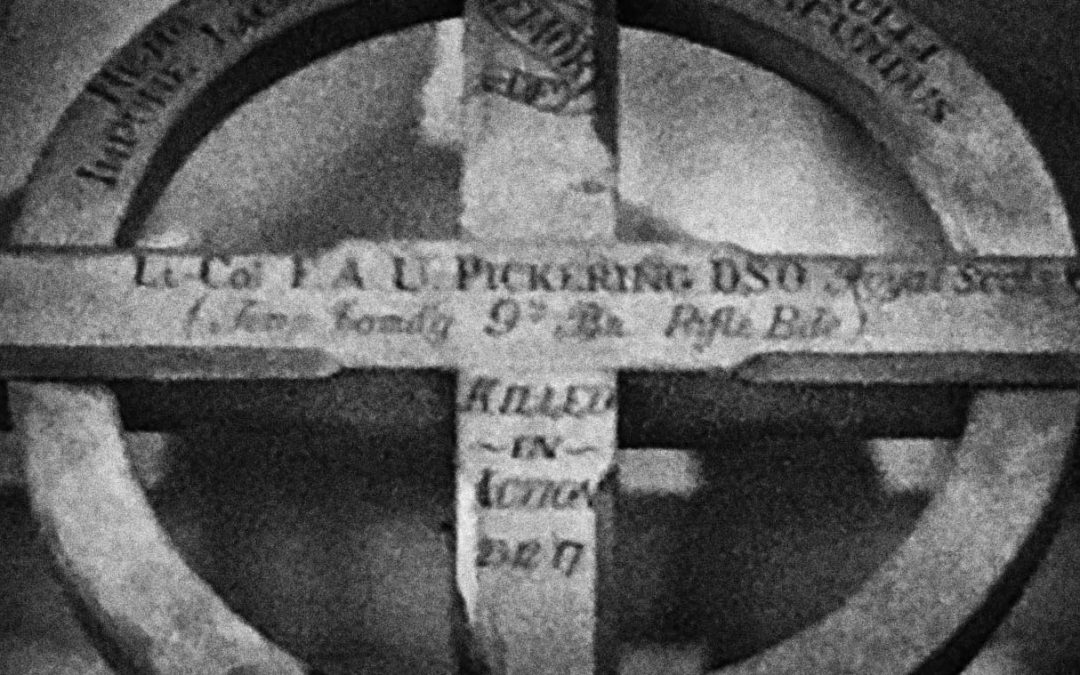 At the top of the shaft:
A small plate, now indistinct (may be ICWG)
The crest of the Royal Scots Greys, and in a scroll
“In Memory Of”

Circle plate:
Upper left segment has
“Nemo Me Impune Lacessit” (No one provokes me with impunity)
Upper right segment has
“Nulli Secundus” (Second to none)

Both lower segments are plain

Other information
Mounting to wall: Mounted on a two segment plinth, attached to the wall and set in a space in the beams of the arched room trusses approximately 3.5m above the floor.
Detailing: Painted faded white or grey with black handwritten painted lettering.
Some damage to the left lower celtic circle where it meets the shaft, with a crack running from its junction at a 45 degree downward angle across the shaft. A rough piece of wood is attached to the back of the cross, it seems to be to reinforce the damaged shaft.
Edges of the shaft and the cross beam are bevelled.
Evidence of use in field: General condition, damage etc.
Surface insertion depth (if apparent): Not readily apparent, but it may have been trimmed before attachment to the plinth
Finish (varnish, paint, oiled, unfinished etc): As above
Condition: Good overall, clearly showing its age and use in the field, plus the damage noted.

Notes and observations:
There is a plaque attached to the wall below the cross which reads:-

IN LOVING MEMORY OF
FRANCIS ALEXANDER UMFREVILLE PICKERING
2ND DRAGOONS (ROTYAL SCOTS GREYS) KILLED IN ACTION DEC 23RD 1917 ON THE PASSCHAENDALE RIDGE WHILE COMMANDING THE 9TH RIFLE BRIGADE
THIS CROSS CAME FROM HIS GRAVE IN THE WHITEHOUSE CEME-TERY, NEAR YPRES
“THEIR NAME LIVETH FOR EVERMORE”

Frank Pickering was born in August 1881 and was educated at Eton where he achieved both distinction at his sporting skills being both a cricketer and footballer (First Eleven) as well as notoriety for his misdemeanours. On the walls of Kincardine hang, not one but, two birches which were used to beat him. Apparently the sum of half a guinea (10/6d) was added to the miscreant’s school bill on each occasion ‘for extra tuition’ – but there was the compensation of being allowed to keep the birch. They are rather dried up now but one needs little imagination to think how actively wielded freshly made birches must have hurt on a naked backside. What crime deserved such punishment? Rumour has it that it involved some boys from Eton’s rival school Harrow and some buckshot which somehow peppered their backsides.

Frank was commissioned into the Royal Scots Greys in 1901 and departed shortly afterwards for South Africa where he served in the Boer War winning the Queen’s Medal with four clasps for his services.

A tremendous welcome was prepared for him when he returned, wounded, to Kincardine in September 1903. An evergreen arch was formed over the entrance gates sporting the words ‘Welcome Home Again’ in flowers. At the gates there were speeches and cheers. The scholars presented an address to Mrs. Pickering congratulating her on her son’s safe return and thanking her for her support. The horses of the carriage were then unyoked and ropes attached and a procession formed and, with tenants, feuars and villagers pulling the carriage and the others following behind, everyone proceeded up the drive to Kincardine.

From 1907 to 1909 he was an extra ADC to the Governor-General and Commander-in-Chief in the Dominion of Canada. In 1910 he married Angela Sutton at a glittering London society wedding. They later had two sons.

During the Great War Frank saw service on the Western Front in 1914 and in Gallipoli during 1915-16 and on returning from that disastrous adventure took a safe staff job for a time. Safety and staff jobs were, however, not for him and he asked to return to the front line. In 1917 he was in action once more and survived the horrors of trench warfare during the spring and summer. By December he was an acting Lt. Colonel in command of a Service battalion of the Rifle Brigade having won a DSO earlier in the year. On 23rd December he and his Adjutant were approaching the front at Passchendaele Ridge near Ypres when they were both killed by a shell.

The temporary wooden cross from his grave in Belgium stands now in the chancel of the little Scottish Episcopal Christ Church in Kincardine O’Neil above a commemorative brass plaque. The damaged nature of the cross is a poignant memorial for all those killed in combat. Quite how Frank’s mother, Mary Pickering, was able to recover the cross is unknown. Frank’s two children survived without offspring. Frank’s great, grand-nephew Charlie Bradford serves currently in the Royal Scots Dragoon Guards, the successor to the Scots Greys. 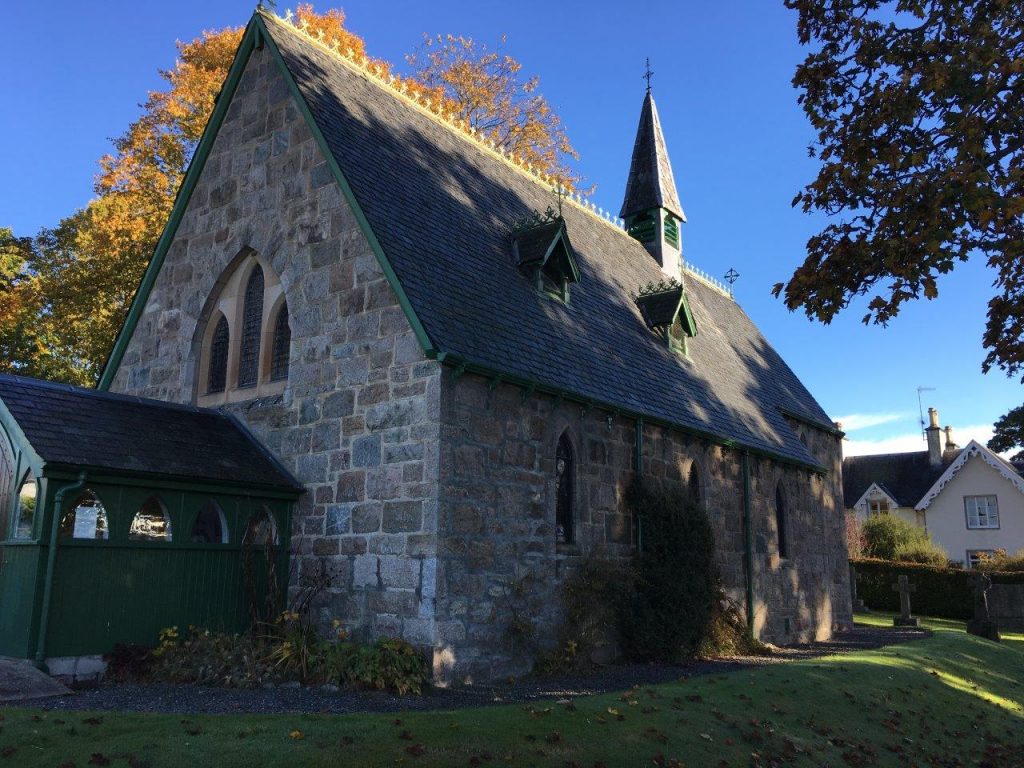 Survey and photographs by Scott Galloway
Date of survey: 25/10/2016 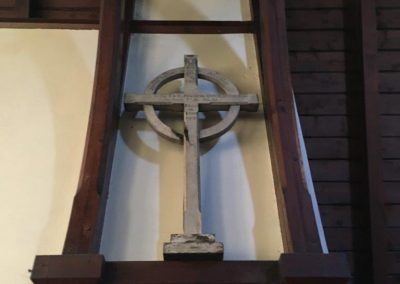 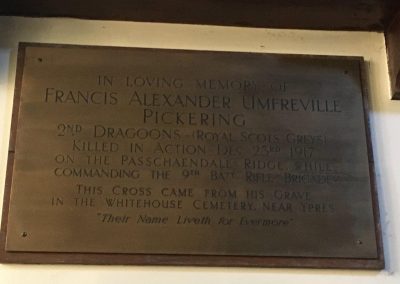 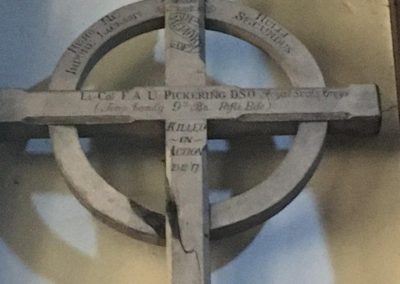 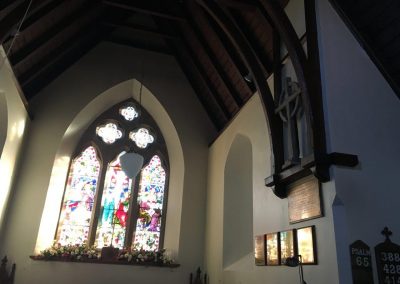 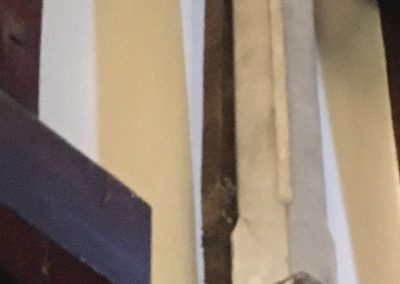 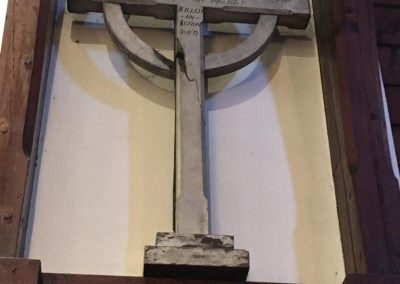 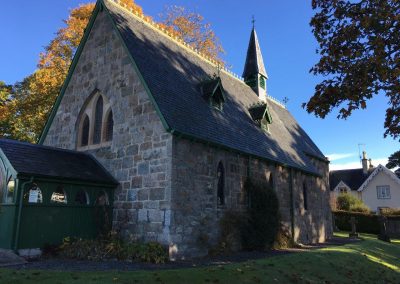