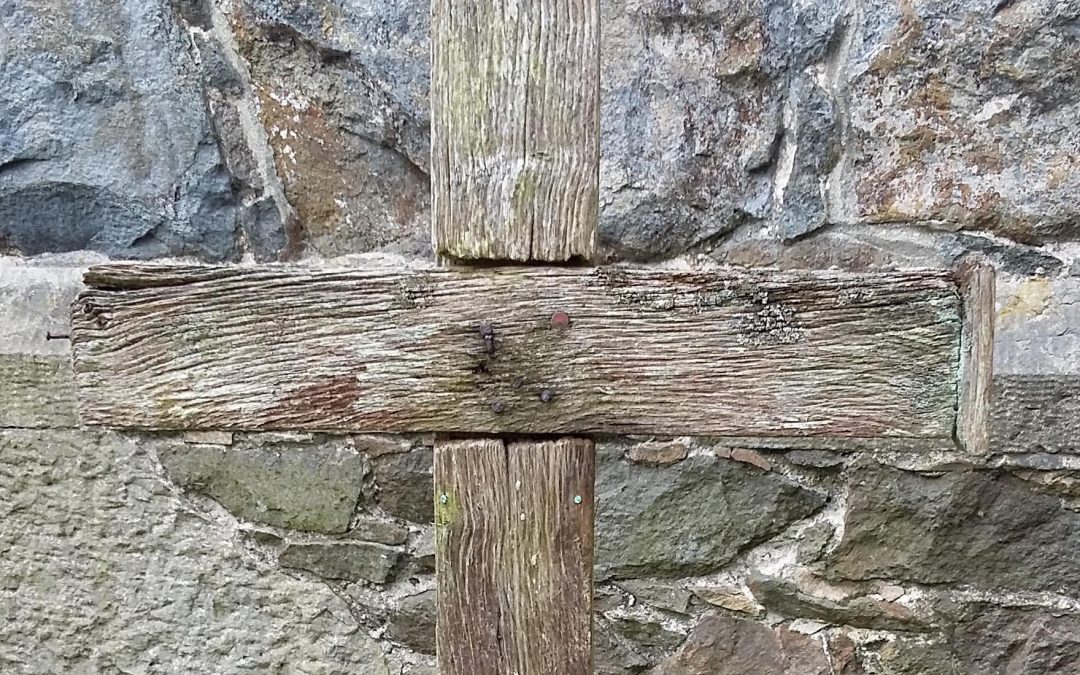 No Details on cross.

Other information
Mounting to wall: The cross is to be found at the rear of the church as you approach on the path on the right hand side, it is set in concrete but when lifted it comes free of the concrete.

Condition (cracked, paint peeling, woodwork, damage etc): The cross is in very poor condition, it is badly weathered there are no distinguishing marks or tags  to indicate who the cross belonged to, end pieces attached to either end of cross member the end piece on the left hand side is missing and a large nail is protruding, the end of the shaft is badly rotted and decaying and although set in concrete it can be lifted free. It is quite a substantial cross and would have been very sturdy in its original form.  There is the remains of a 2nd cross next to this one,  again set in concrete but the cross member is missing from this one, it is of the same style and size.  Again no indication as to who this cross may have belonged to.

Other information, notes and observations: Major Neave was born on 2nd July 1875 in London he died on 21st Feb, 1915 from wounds received in action while leaving his squadron to the attack in the trenches at Ypres. He is buried in Ypres Town cemetary, grave ref G.1. There is a bronze plaque in the church dedicated to Major Neave from his mother, sister and brother. 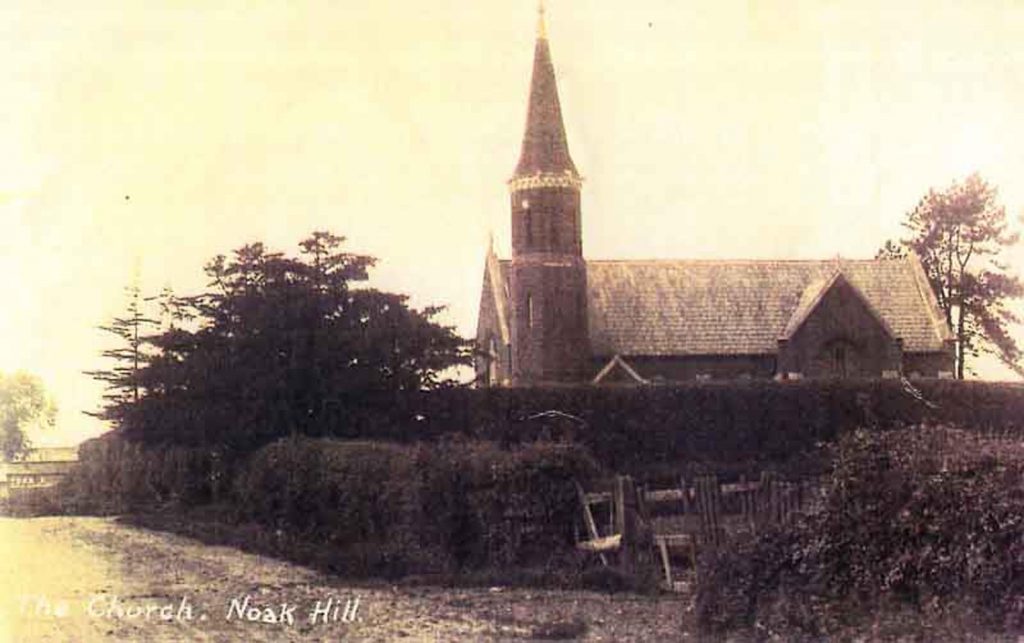 He was the 2nd son of Sir Arundell Neave, Bart., of Dagnam Park, Romford, Essex and the Hon. Lady Leave of Llys Dulas, Amwlch, Anglesey. He was the great nephew of Sir Roland Smyth K.C.B. who commanded the 16th Lancers, which was Major Neaves regiment. Educated at a private school and Eton he joined the 16th Lancers from the Royal Anglesey(Royal Engineers) militia in may1898, becoming Lieutenant in may 1899. He served in India and  in the South African War, being present at the relief of Kimberley.  He received the Queens medal with 3 clasps and the Kings medal with two clasps. He was promoted major in 1914.  For his services in the first world war he was mentioned in Sir John French’s despatches of the 8th of Oct. 1914 and was awarded the Cross of a Chevalier of the Legion of Honour by General Joffe for gallantry during the operations between 21st and 30th August 1914.

St, Gwenllwyfo’s Church was was built between 1854-1856 replacing an earlier Church that was nearer the congregation but had fallen into disrepair and is now a ruin.  It is a grade 2 listed building in particular because of its “ fine collection” of stained glass. Sir Arundell Neave donated 27 panels of 14th,15th and 16th Century stained glass that had once belonged to  a Flemish monastery. Believed to be the 2nd largest collection in the world. Other examples of the glass can be found can also be found in the Metropolitan Museum of Art in New York, Victoria and Albert museum in London.  The glass was bought by Thomas Neave the father of Sir Arundell Neave from a Norwich based German Merchant, they came from a monastery in Leuven in the flanders region of Belgium.

Sincere thanks to Avril Lloyd, Church Secretary who has written a book on the stained glass and gave me this information. Unfortunately I was unable to gain access to the Church at the time of visiting and therefore was unable to photograph  the inside.

Thanks also to Sir Paul Neave for his interest in the subject.

Avril also informed me that on Armistice Day a poppy is placed on the cross, although she does not know its origin. 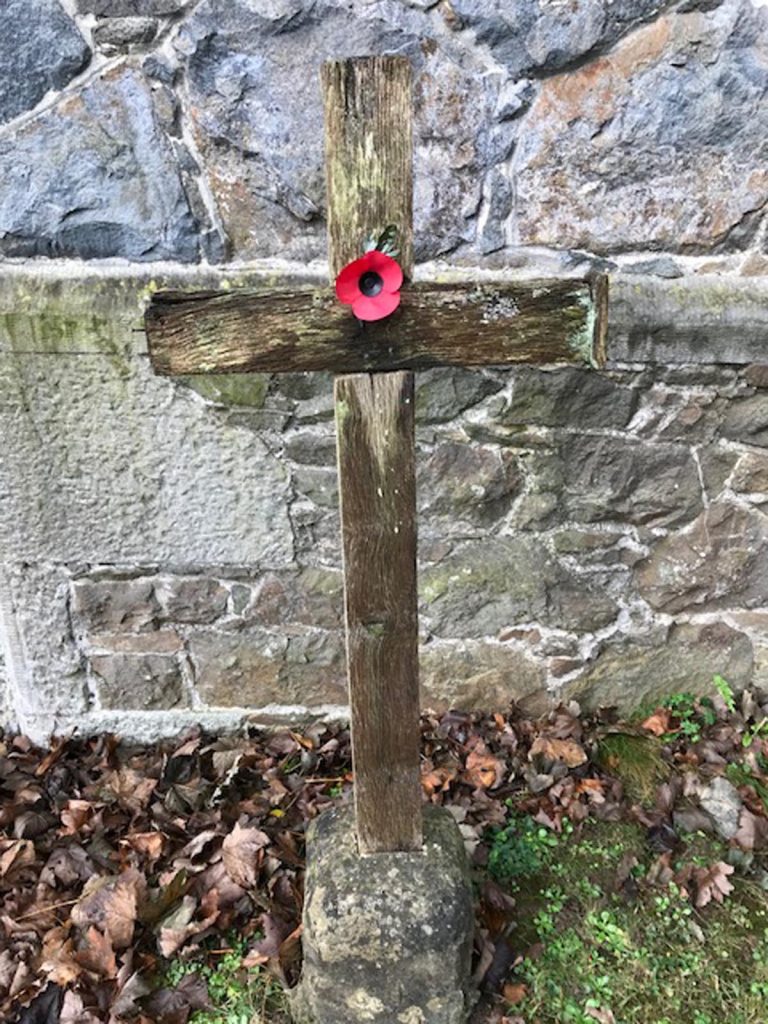 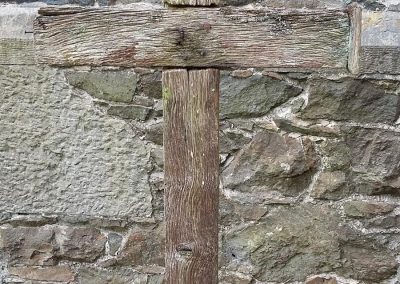 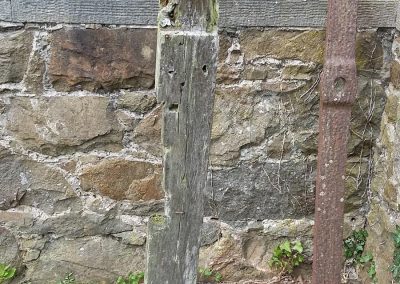 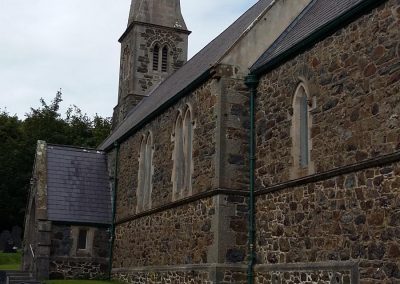 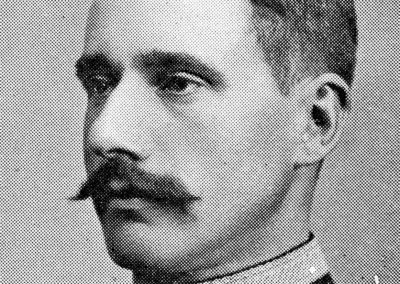 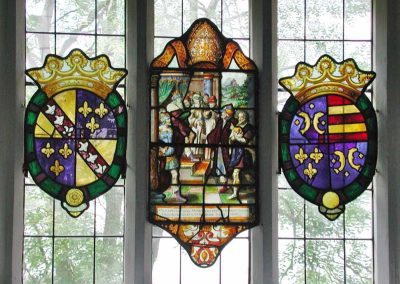 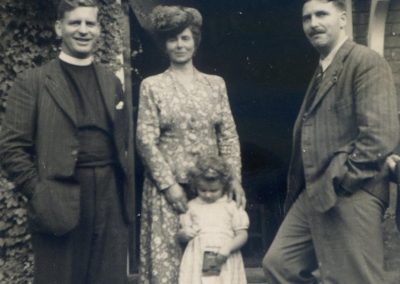 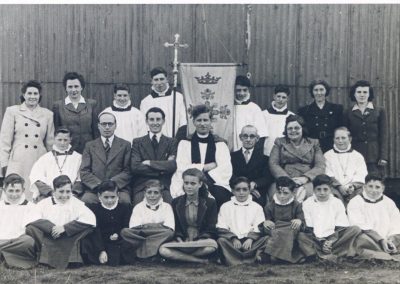 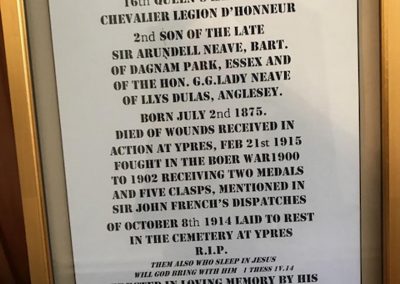 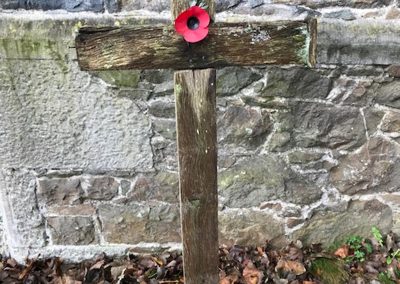 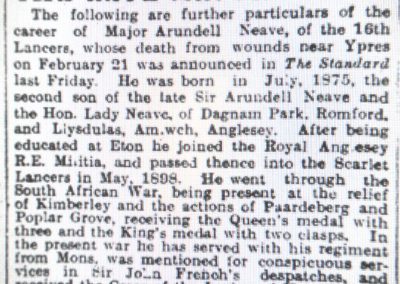 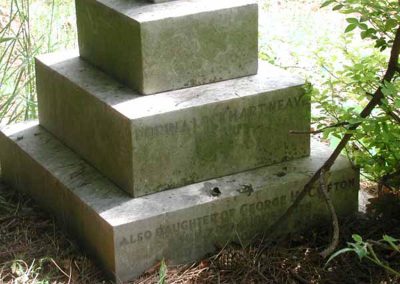 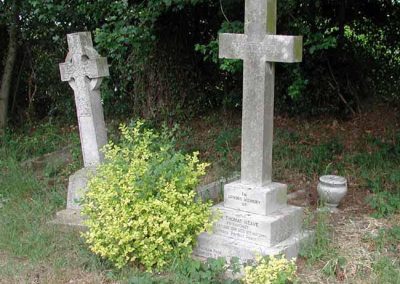 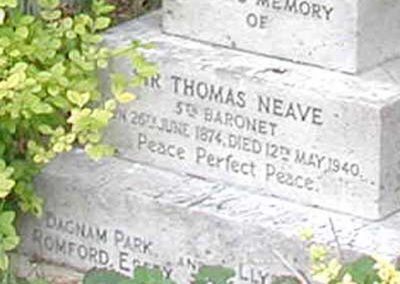 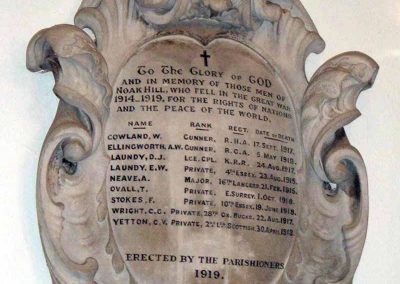 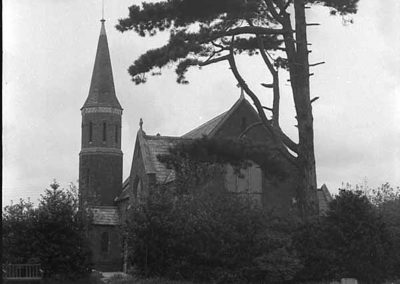 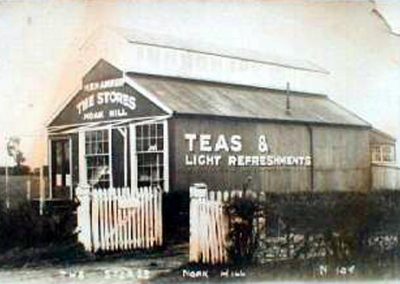 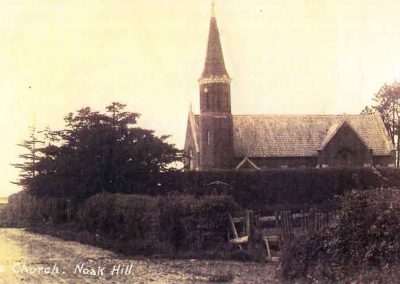 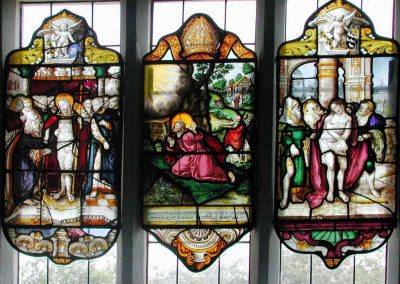 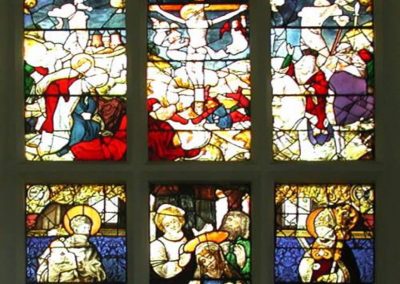 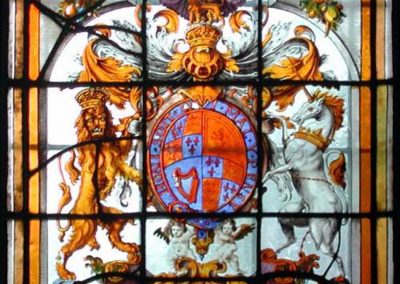 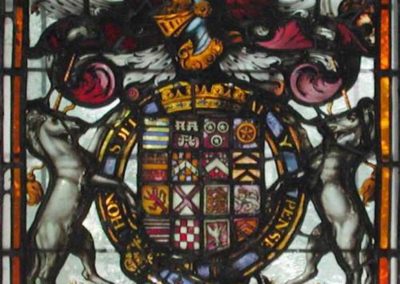 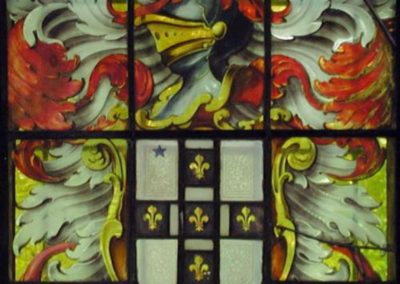 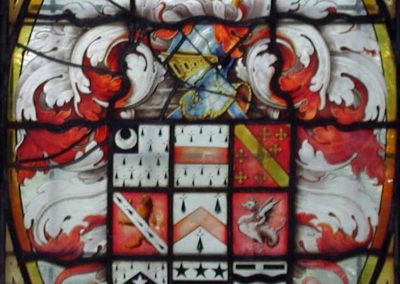 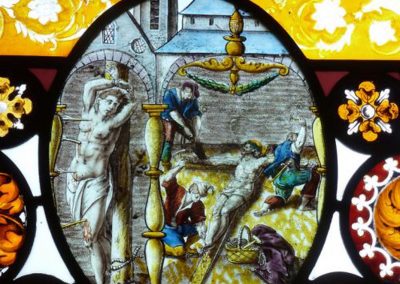 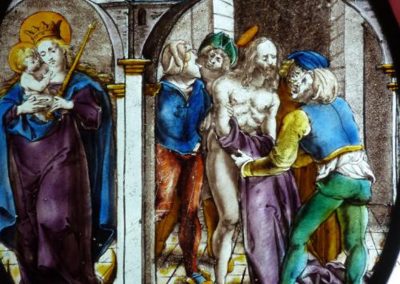 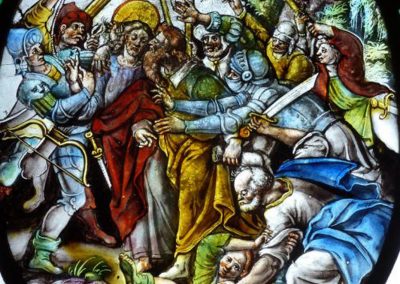 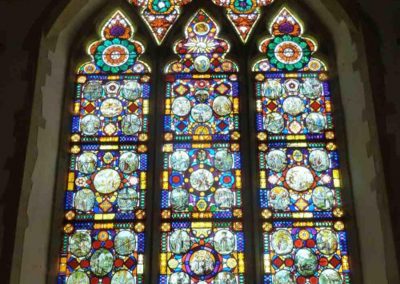