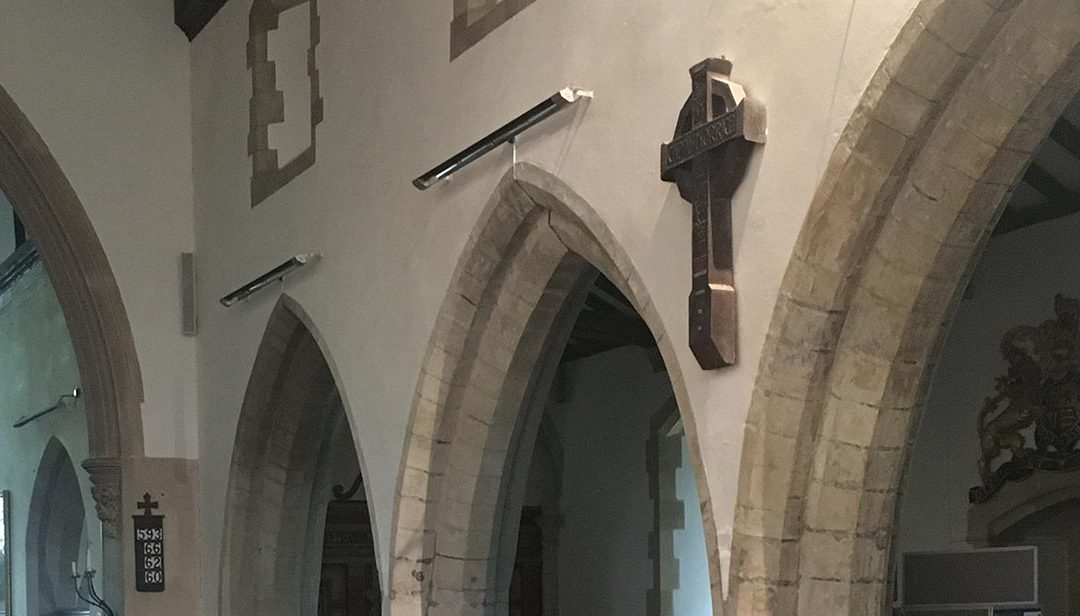 Top of shaft:
In
Memory
Of 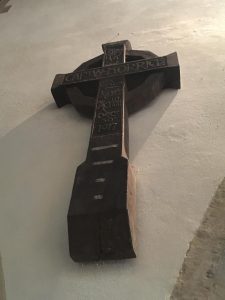 There is a Latin inscription around the wheel which reads:

REQUIAM RETERNTTAM DONA ET DOMINEA LUCEAT EI ET LUX PERPETUA, which I believe translates into “Eternal rest grant unto him. And let perpetual light shine upon him. May he rest in peace”

Other information:
Mounting to wall: Not obtained
Detailing: Top of shaft and crossbeam ends are shaped. There are carved borders around the words. The circle is actually octagonal shaped.
Evidence of use in field: Not determined
Surface insertion: N/A
Finish: Stained
Condition: Good, apart from large crack emanating from the bottom up the shaft.

Notes and Observations:
Longbridge Deverill parish used to encompass Longleat House and Estate. This explains the presence of the Bath chapel to one side of the Church, which stands over the family vault of the Thynnes. The Chapel also contains suits of armour said to be worn during the Battle of Pinkie 1547.

This cross commemorates Capt William Walter Morrice, of 3rd Battalion Wiltshire Regt who was attached to the Labour Corps.

Capt Morrice’s cross is positioned high on the wall, behind you when you walk into the centre of the church, between the arches.

Opposite the cross is a magnificently detailed carving which depicts a soldier kneeling before Jesus.

The CWGC website shows Capt Morrice to be the son of John David and Jessie Fenton Morrice. This is confirmed on the 1891 census (copy included in report). Capt Morrice has a strong family connection to Longbridge Deverill; his grandfather was born in the village, and his father later became vicar of the parish 1875 – 1890, during which time Capt Morrice was born, 25 Mar 1881.

Capt Morrice chose a different career to that of his father and grandfather and became a solicitor before being gazetted as second lieutenant into the Wiltshire Regiment in June 1915.

The CWGC also lists three other WWI servicemen being buried at Longbridge Deverill:

On the day, I could only locate the headstones of Fisher and Wheeler.

Addenda:
You may be interested to know that there is a plaque to the memory of Captain Morrice in the reredos behind the altar with a carving clearly showing the cap badge of the Wiltshire Regiment. Furthermore three Morrices have been rectors of the church, viz William D Morrice (1852 – 1875), John D Morrice (1875 – 90) and James C Morrice (1927 – 29). Captain Morrice was born in 1881. It seems likely that he was related to all three, and perhaps he was the son of John Morrice. Interestingly Captain Morrice is not listed on our Board of Remembrance commemorating those killed in both World Wars from Longbridge Deverill, Hill Deverill and Crockerton whose names are read out on each Remembrance Day.
Finally Captain Morrice was killed in action in December 1917 and we are considering how to mark this centenary year on a local basis. 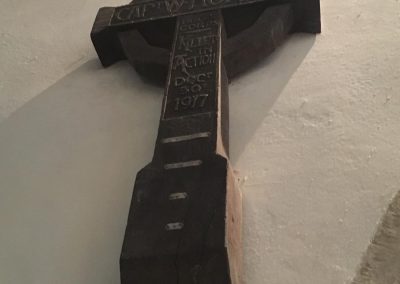 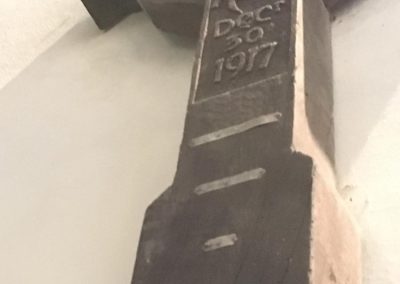 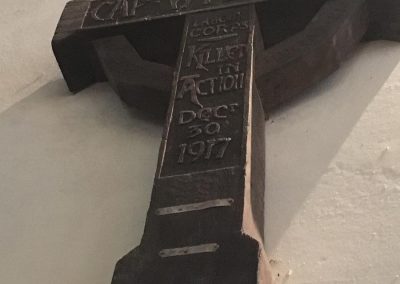 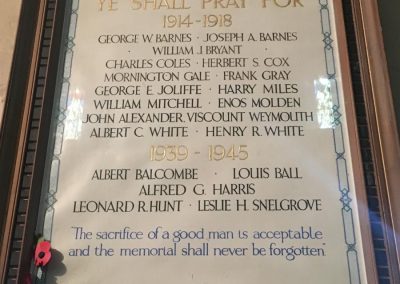 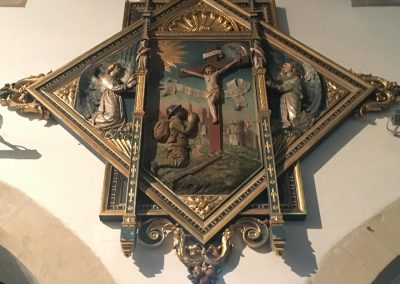 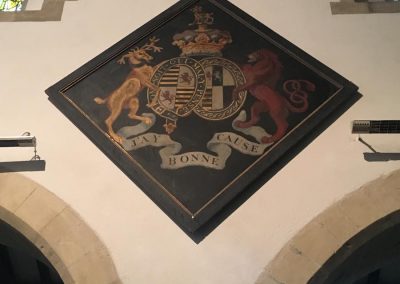 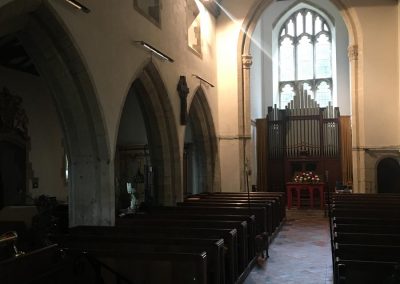 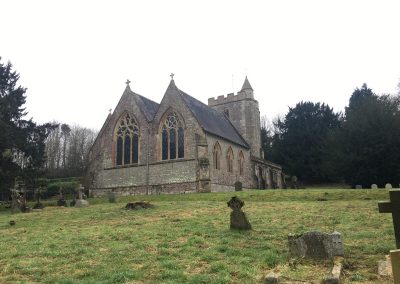 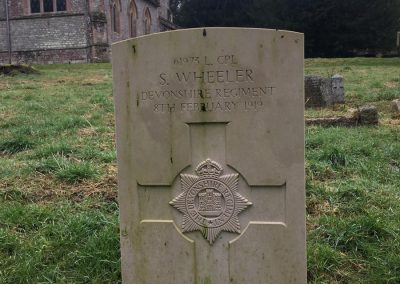 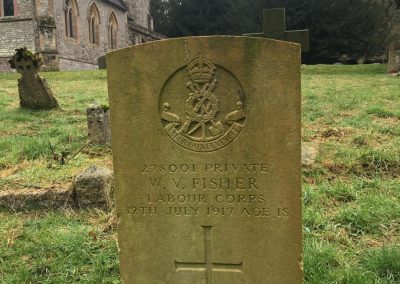 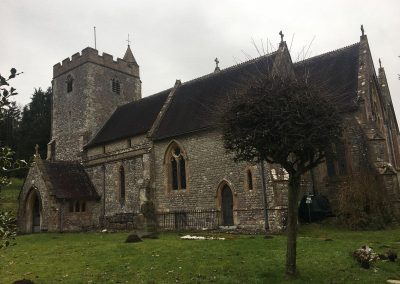 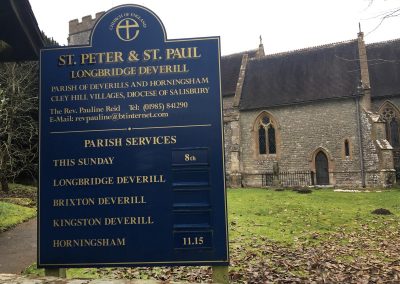 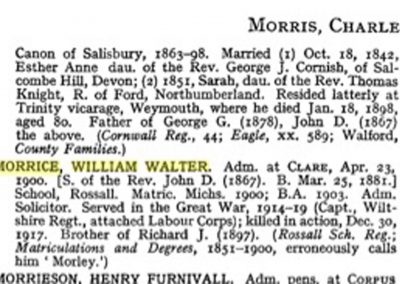 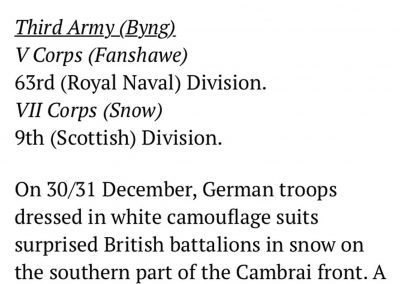 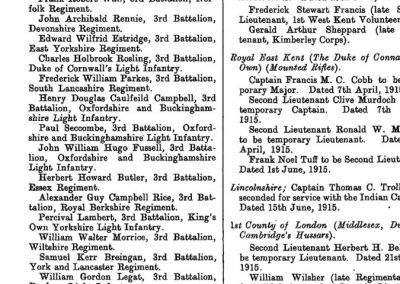