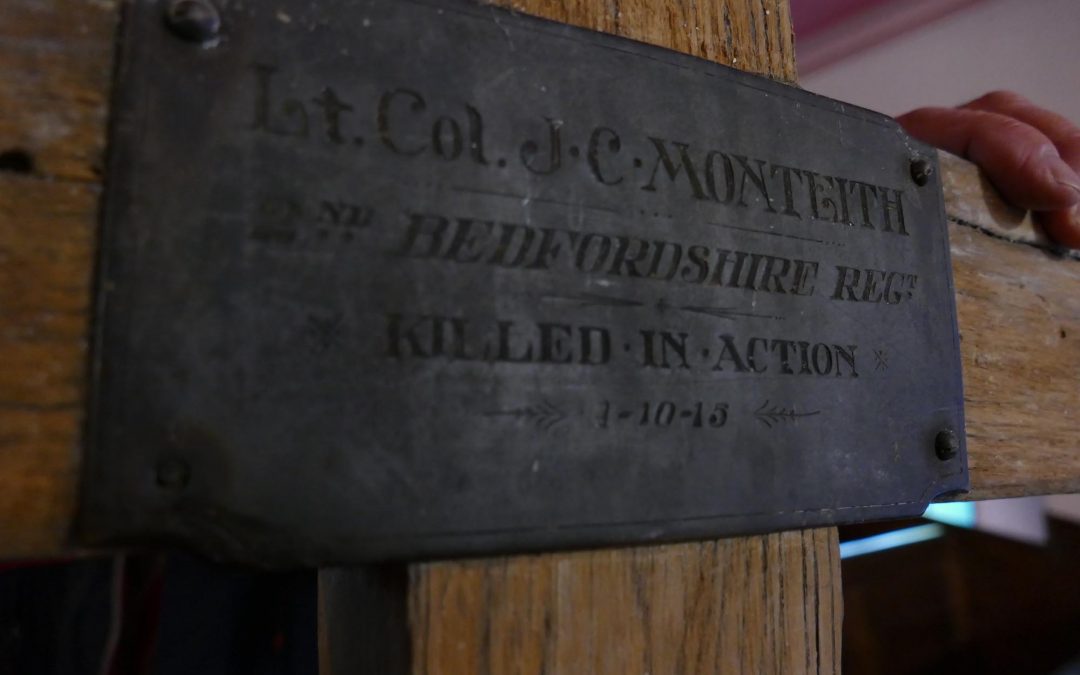 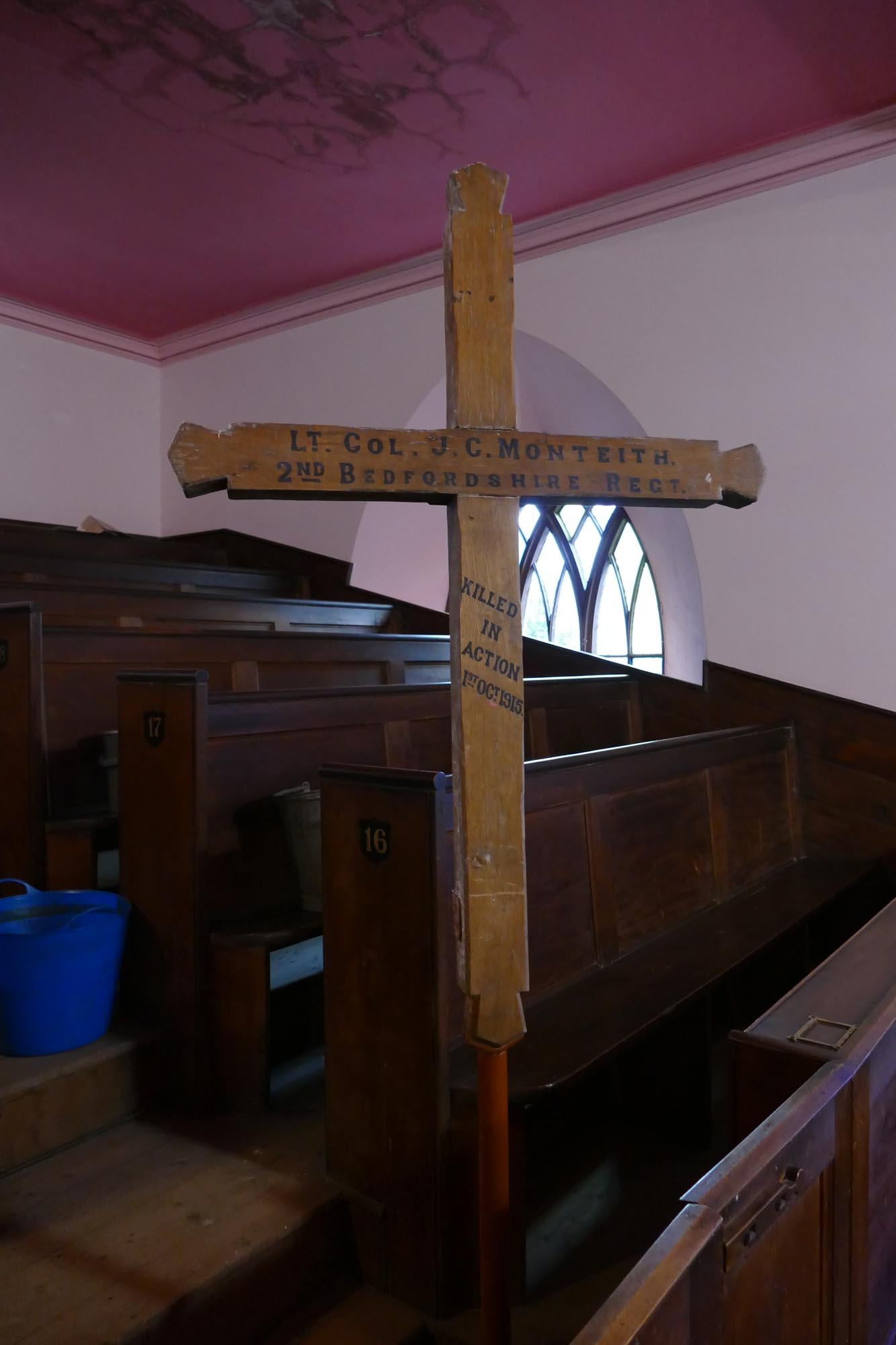 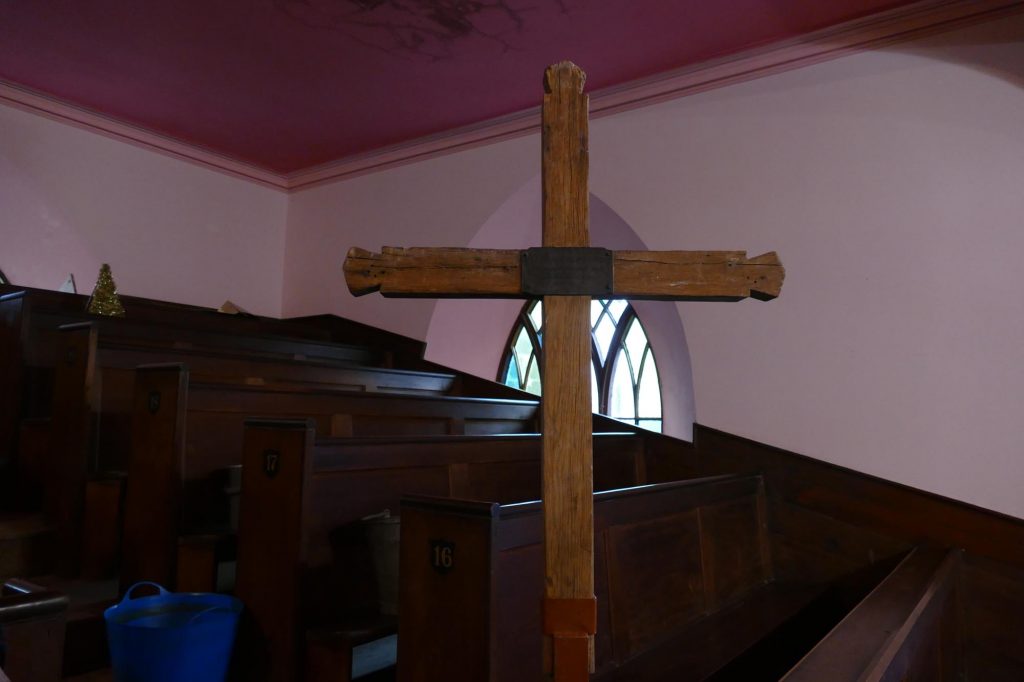 Other information
Mounting to wall: Cross is mounted on what appears to be a customised metal stand. This originally was screwed into the floor of a platform that the church altar stood on. Following modifications of the church the cross was removed and it is currently stored out of site in the upper gallery of the church at the rear of a pew. There are holes on the back cross beam that may indicate it was also at one point fixed to the wall

Detailing: The cross is quite ornate with shaped ends to the shaft and the cross beam. It is not clear when this was carried out as the lower part of the cross shaft is also cut in the same way. In the field this would have been buried so is unlikely to have been so shaped when marking the grave. The shaft itself appears to be relatively short compared with the cross arm so possibly the lower part of the shaft was damaged/rotten and was shaped to match the other arms of the cross when it ‘returned from the front.

Evidence of use in field (earth marking, cracking, staining, shrinkage): None noted

Finish (varnish, paint, oiled, unfinished etc):  The wood has a varnish on it.

The information we had was that the cross was inside St Ninian’s in Moniaive. A visit was arranged, however once inside it was clear that no cross was there. However, thanks to the assistance of the Session Clerk (Mr Linsay Dunse) we were guided to the Glencairn Kirk a couple of miles outside the village where he showed us the cross.

St Ninian’s does however hold the original hand written Roll of Honour for the Parish of Glencairn on which Lt Col Monteith’s name appears as well as a stone war memorial. Interestingly the Roll of Honour lists him as a captain (he was subsequently promoted to major before posthumously being awarded the rank of lieutenant colonel).

Glencairn Kirk has an almost identical stone war memorial and there is a memorial stone to Monteith and his brother in the churchyard by the family graves.

John Monteith was the son of the Reverend John Monteith (minister of Glencairn). He volunteered for the army at the outbreak of the Boer War but did not serve in South Africa. He joined the 1st Battalion the Bedfordshire Regiment and was posted to India, and Aden before returning to the UK until the outbreak of WW1. By this time a Captain, he commanded D Company at Mons and Le Cateau. In October 1914 he saw action at La Bassee and was wounded at Ypres in November being evacuated home. After recovering, the now Major Monteith was sent to France at the end of July 1915 joining the 2nd Battalion to take part in the Battle of Loos. Following the wounding of the commanding officer on the first day of the battle (25 September) Major Monteith led the Battalion in their efforts to gain ground and then defend their positions. In the early hours of 1 October Major Monteith was killed ‘while superintending the blocking of a trench in a very dangerous part of the line’.

He was promoted lieutenant colonel posthumously and mentioned in dispatches for his conduct. Just before his death he received news of the birth of his son.

He is buried in the Vermelles Cemetery.