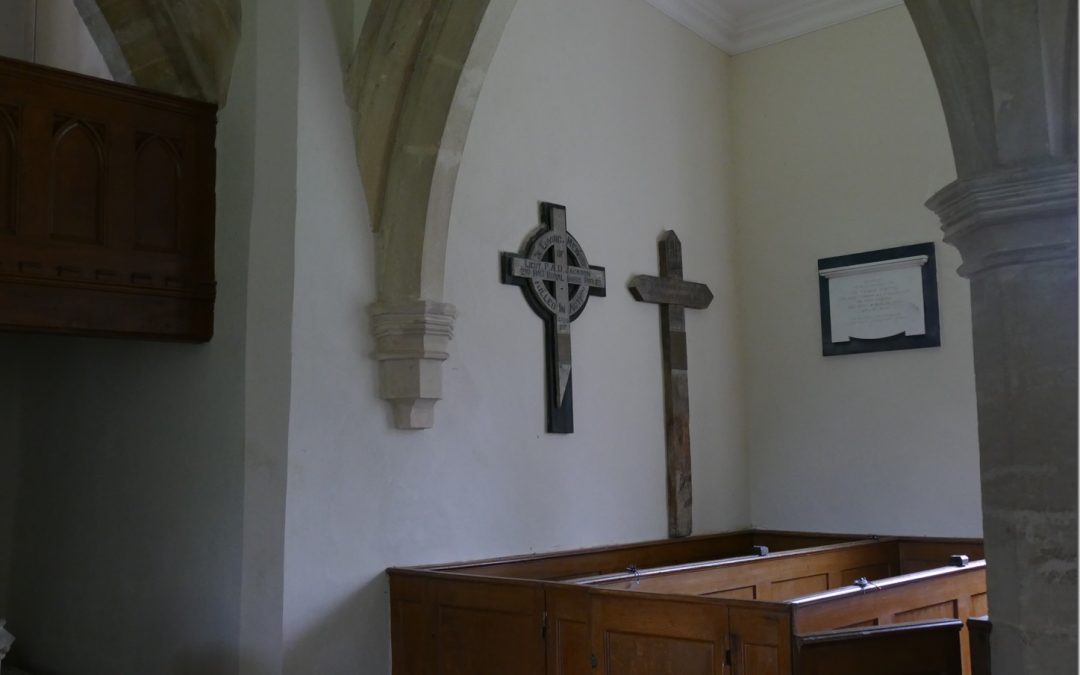 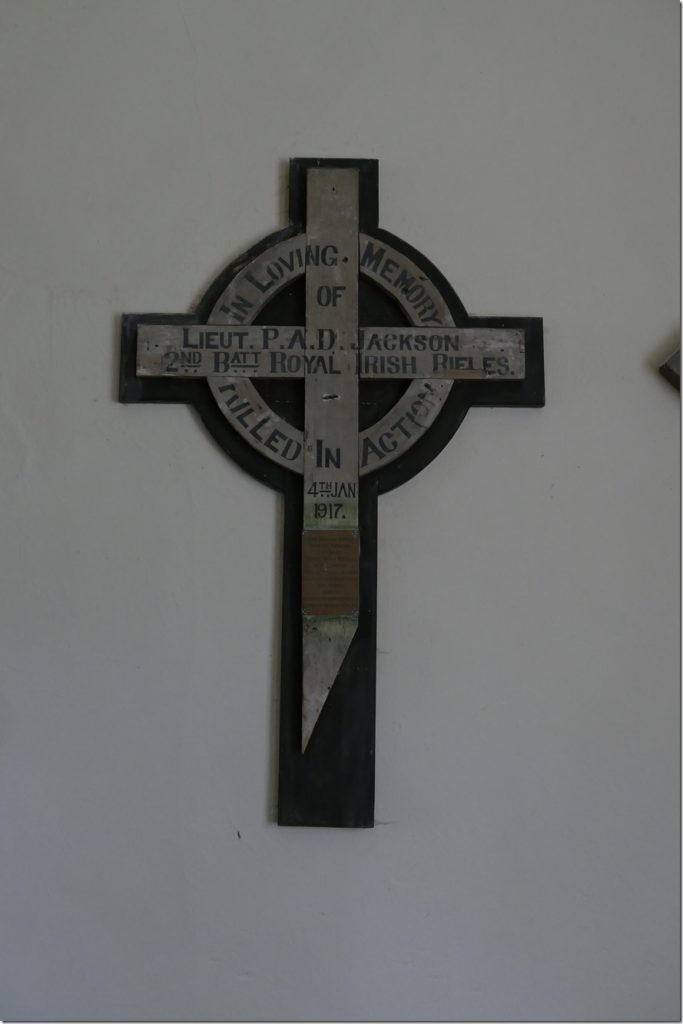 Other information
Mounting to wall: Mounted on wooden base

Detailing: There is a brass plaque mounted on the cross with wording as follows.  LIEUT PATRICK ARTHUR DUDLEY JACKSON 2ND BATT ROYAL IRISH RIFLES ONLY SON OF LT COL & MRS JACKSON KILLED IN ACTION AT YPRES JAN 4TH 1917 AGED 19 OBTAINED HIS COMMISSION 1914 SERVED IN FRANCE FROM 1915

Condition (cracked, paint peeling, woodwork, damage etc):  There are a few replacement pieces of wood that have been ‘let in’ to the cross-presumably to repair damage.  It’s unclear what the damage was because the wood has been cut out to fix the repair pieces in.  The paint has been applied as appropriate to these repair pieces.  The bottom of the shaft appears to be missing and has been cut diagonally.

I have been unable to establish any connection between Lt Jackson and this church.

A photograph of Lt Jackson appeared in The Sphere’s Roll of Honour.

He is buried in plot A2 of  Hyde Park Corner (Royal Berks) Cemetery in Ploogsteert near Ypres, Belgium.

received a temporary commission on 2 December 1914 in the West Belfast Battalion and a permanent commission on 4 June 1916.  He had been wounded on 1 July 1916 in the opening battle of the Somme and was attached on recovery to the Special Reserve at Belfast.  He had rejoined his regiment at the front just before his death.

His father Col. Cecil Jackson was declared bankrupt in 1913 and at the time was listed as living in Luton, previously in Wiltshire.  The obituaries suggest that at the time of his death his parents lived at 79 Cadogon Place in SW London.

The Belfast Newsletter of 2 January 1929 contained an article by Brigadier-General FC Crozier CB CMG DSO entitled Exploits in No Man’s Land.  Part of the article read

‘A very young officer, 2nd Leiut. P.A.D. Jackson, had been left behind in England owing to his tender years.  Later he reached the base.  Taking the first opportunity which offered itself he came up with a draft to see his battalion.  We were in the line when he arrived at our transport lines at Forceville; so he came up to see me.  I said-much to his disgust- he would have to return in the morning.  “Well sir,” he said “anyhow I can go out on patrol tonight with ____”, mentioning his best friend .  I pretended not to hear him and winked at my adjutant!  Suddenly Paddy as we called him, vanished, and we did not see him again for several months, when he joined us once more, on the strength.  He went out on patrol that night, had a scrap, returned to the base and poked fun at his comrades at Havre who had no desire to volunteer for patrol duty and thought him mad for doing so.  But what if he had been killed?  How would I have accounted for him in No Man’s Land, where he had no right to be?  Paddy was an Old Etonian and as such asked me the following June if he could go to Amiens to the O.E. dinner on 4th.  I gave him permission provided one of his pals (he had many) would take his tour of trench duty.

On the night of the 3rd June I was going round the line when a terrific bombardment broke out.   Taking cover behind a traverse I espied Paddy doing likewise a few yards off.  He was mumbling to himself, and this is approximately what he said: “Spare me O Lord, to go to the dinner.”  He didn’t ask for complete immunity-only to go to the dinner.  He went to the dinner, and I met him in the line by chance at 6a.m. on his return when he told me how much he enjoyed himself.  Three weeks afterwards, on the famous 1ST July, when the battle of the Somme started, he was severely wounded when leading his platoon.  Recovering very quickly he returned to France, to a regular battalion of the regiment, he having received his permanent commission, and was killed almost at once.  Floreat Etonia!  It was bound to be.  A worthy son of a worthy sire!  His father commanded a battalion of the regiment during the war when long past military age.’ 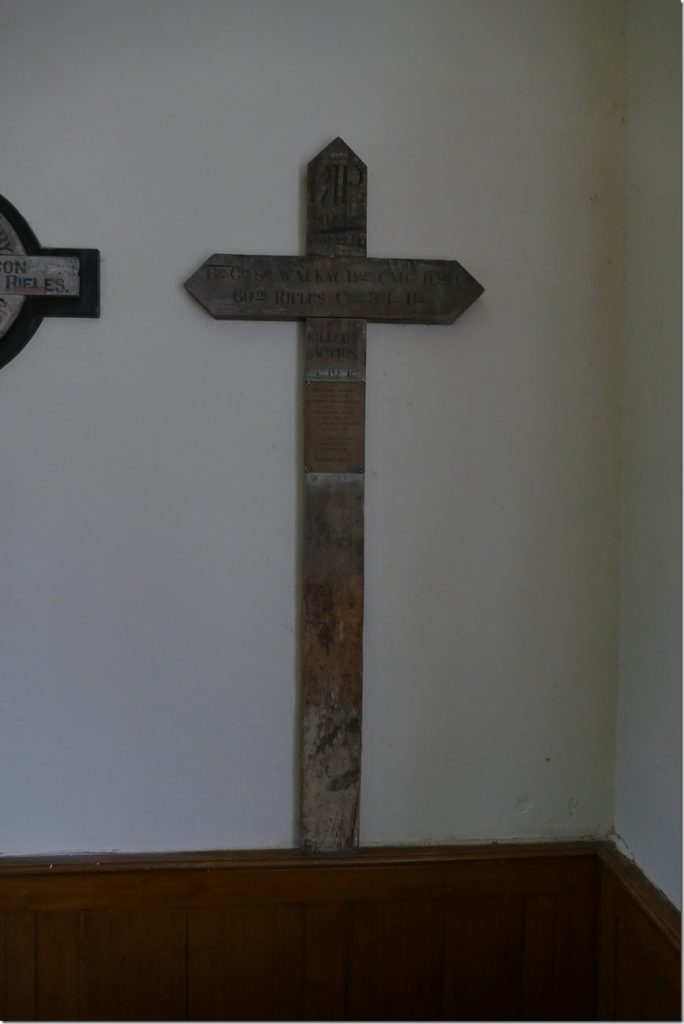 Other information
Mounting to wall: Unclear how this is fixed

Detailing:  Top of shaft and ends of cross beam are shaped to points.  There is a brass plaque mounted on the cross with wording as follows.  BRIGADIER GENERAL SIR WILLIAM ALGENON IRELAND KAY Bart. C.M.G., D.S.O. KINGS ROYAL

Condition (cracked, paint peeling, woodwork, damage etc):  White paint has largely disappeared except in vicinity of the brass plate and on the lower part of the cross.  Lower part of cross is cracked, looks rotten and has some woodworm holes.

I have been unable to establish any connection between Brig. Gen Kay and this church.  When probate was granted after his death his residence was listed as Cedar Towers, Tankerton, Kent.

The church (Grade 1 listed) is in the grounds of Thornton College, formerly Thornton Hall.  The Hall was purchased by the

Order of St Mary and Jesus in 1917 who established a school for girls in the building.

Bloody Red Tabs by Frank Davies & Graham Maddocks says that the Kings Royal Rifle Corps Chronicles for 1918 record that he was killed by a gas shell and is buried at Vadencourt British Cemetery, Maissemy, France (Plot III B4).

The Armoury of St James currently (Aug 2017) have for sale a bronze of Kay’s dog.  The following is taken from http://www.armoury.co.uk/antiques?show=1

The inscription to the base places Welsh corgi Timmy (dates unknown) at the centre of the British Second Army front south of the Ypres Salient on the day that he alerted his master Sir William Kay to an impending attack. The month long attempt by the German 4th Army to capture the Belgian town of Ypres had ground to a halt a week earlier and had included two large scale poison gas attacks in the vicinity of Wulverghem. On both occasions there had been mass British casualties. Timmy’s master was then serving on the staff of the 24th Division, and had only recently returned to the front after being grievously wounded in 1914.

The war diary of an artillery officer serving in the 24th Division shows that after the official end of the Second Battle of Ypres, there was continued shelling and gas alerts on the divisional front up to 31st May. On the 27th he noted ‘The wind is changing round to the N.E. and I am afraid if it goes around any more we shall be just right for a gas attack. As we burst gas cylinders in their front trenches a few days ago, we know  that they have brought up their cylinders back again, and I am very much afraid that they mean to repeat their attack of the 30th of last month.’ The fact that the official histories do not record a further German gas attack in the sector at the time is perhaps the best testament to Timmy’s timely warning. Sir William Kay though a staff officer, was one with an impressive record of coming to grips with the enemy and it is perfectly plausible that Timmy’s vigilance combined with his  pragmatism thwarted German plans.

Sir William Algernon Ireland Kay, 6th Baronet, was a professional soldier and was commissioned into the King’s Royal Rifle Corps in 1896. His early service included a spell in Sierra Leone attached to the West African Regiment in 1898-99. He also served in the South African War with the 1st K.R.R.C. and was present at the actions at Laing’s Nek, Belfast and Lydenburg. He was promoted Captain in 1901 and served as Adjutant,of Volunteers in 1906-8, and Territorials in 1908-9. On the outbreak of the First World War he went to France with the first Expeditionary Force on the staff of Sir John French, and was awarded the D.S.O. for carrying out ‘a personal reconnaissance of great value, reaching a point within 100 yards of the enemy’s outposts’ but was badly wounded. In 1916-17, he returned to France (with Timmy) to serve on the staff the 24th Division under General Sir John Capper, who held the highest opinion of his abilities. In March 1918 he was given command of a brigade in the 1st Division, but within days was wounded in the face by machine gun fire when visiting the forward posts of the Royal Sussex Regiment.  He returned to the front as the commander of the 3rd Brigade, 1st Division, but was killed in action while reconnoitring a new area just a month before the Armistice in 1918. He was was awarded the C.M.G. the same year and was mentioned in despatches six times during the course of the war. 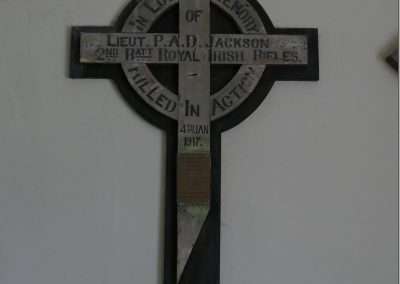 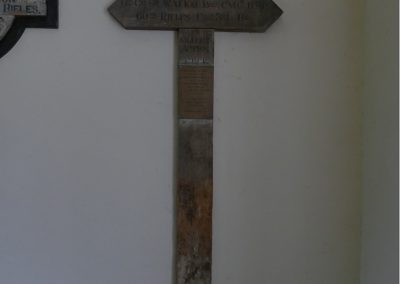 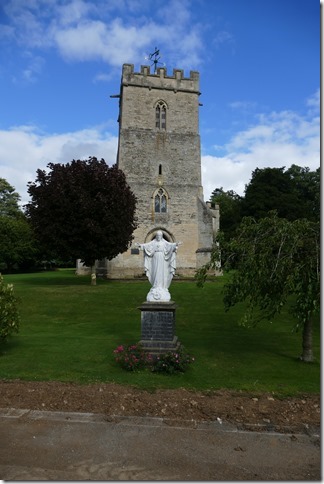 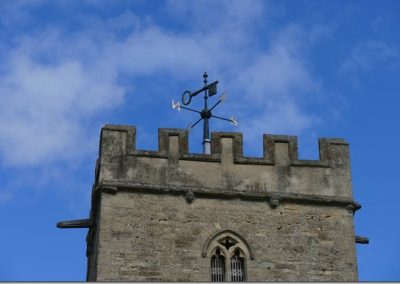 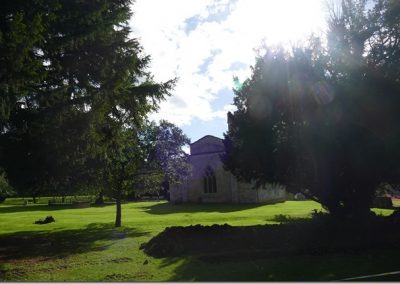 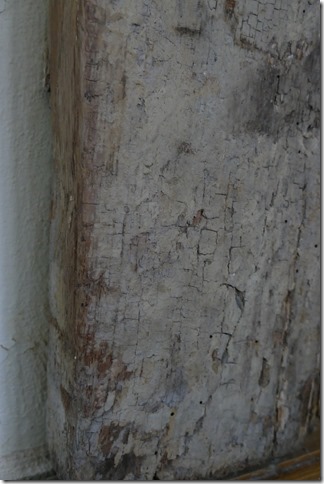 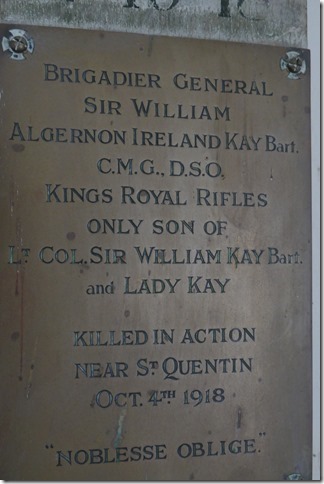 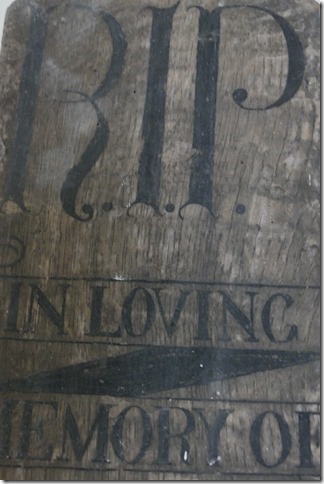 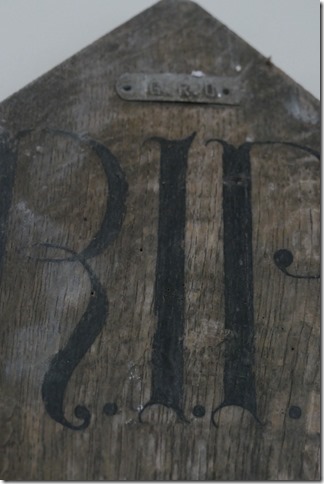 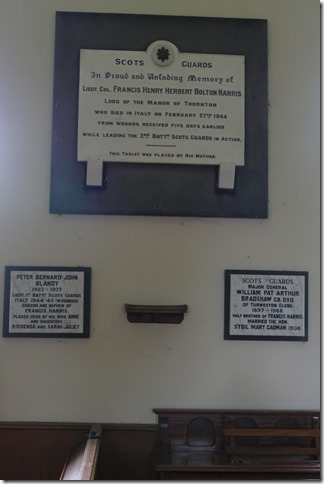 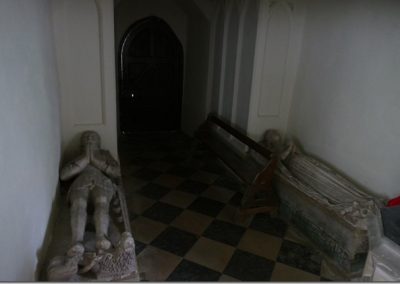 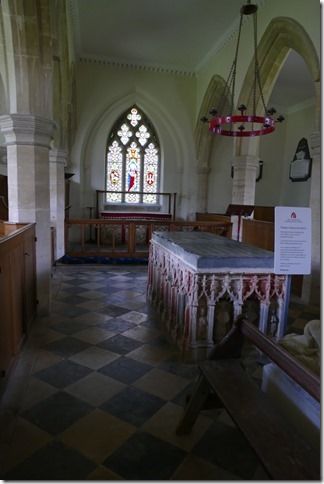 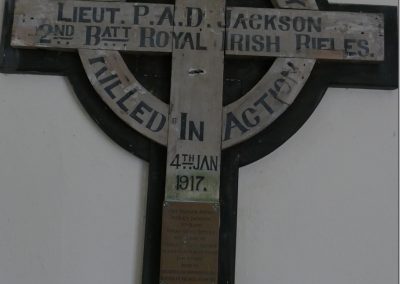 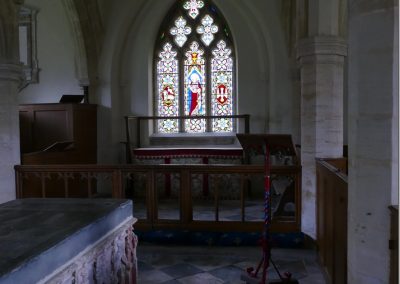 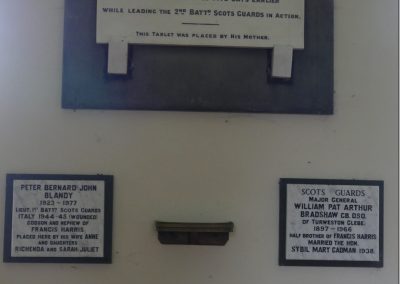 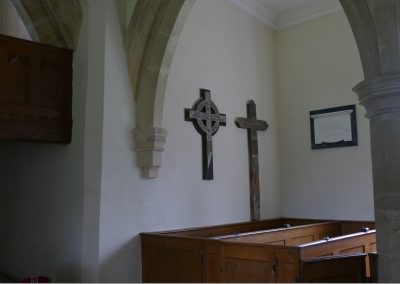 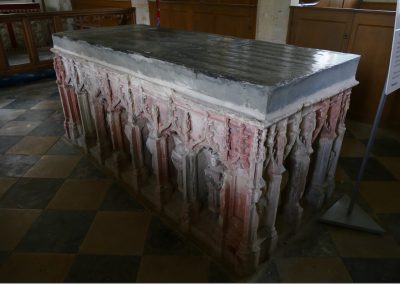 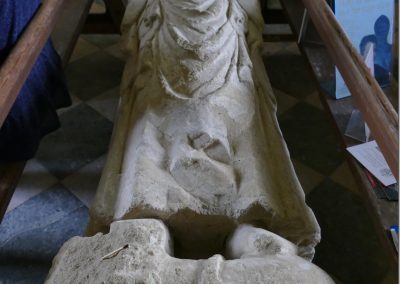 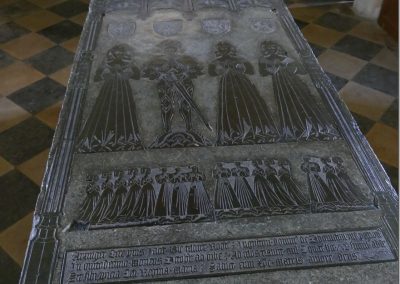 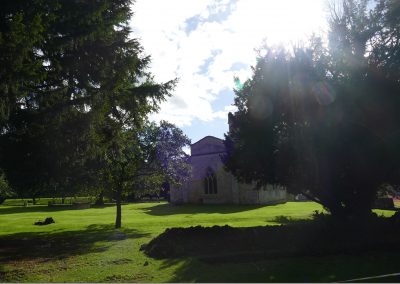