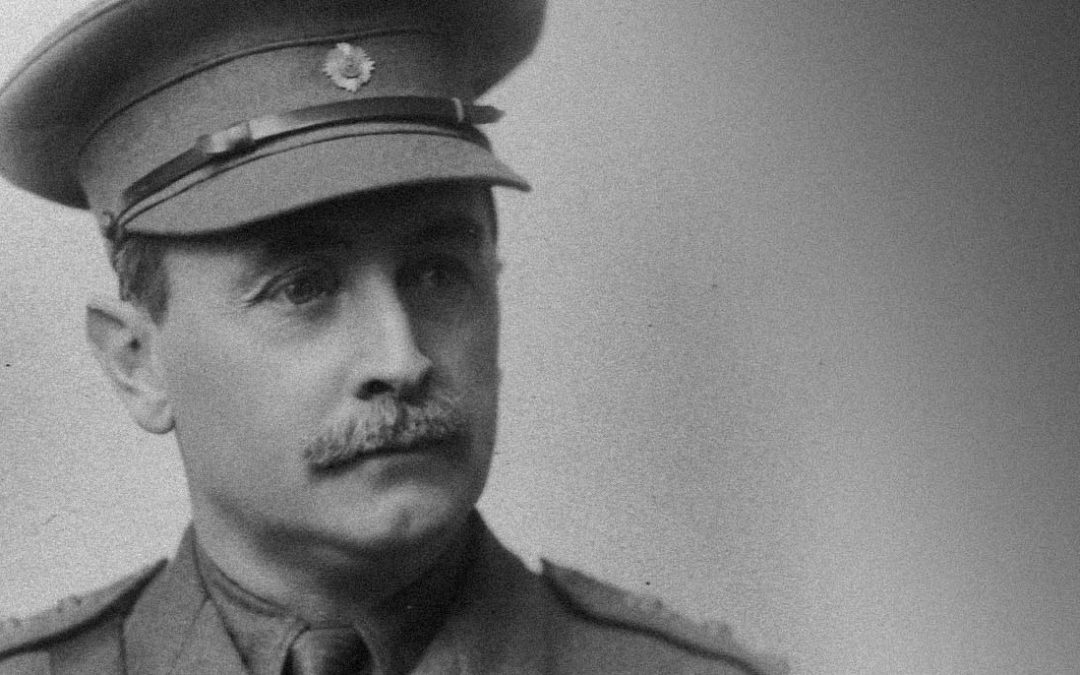 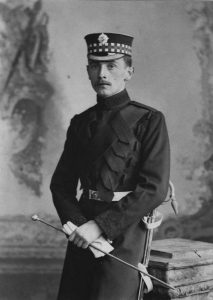 John Thorpe of Coddington Hall went from Eton to Sandhurst to a commission in the Scots Guards. During 11 years of service he fought in the South African or Boer War. There he received for gallantry the Victoria medal with six bars and the King Edward medal with two bars. On the death of his father in 1902 he retired from active service to manage the Coddington and Ardbrecknish estates and the family business in Newark.

In 1904 he married Cecilia Meade, a niece of the Earl of Clanwilliam. Three children followed swiftly. As an officer on the reserve list he transferred to the Sherwood Foresters Yeomanry advancing to the rank of Major and commanding a squadron.

However when war was declared in 1914 he returned to the Scots Guards reverting to his active service rank of Captain. Of this return Walter Batten Powell subsequently wrote:

“I have always thought it was most gallant of him after being away from infantry work so long going back to his old regiment, also forfeiting senior rank which he would have had with the Yeomanry. We shall all miss him most fearfully.”

At Loos in November1915 he displayed great coolness and courage in holding a position over three days of sustained German attack. In this engagement he was wounded and subsequently awarded the Military Cross For a later act of gallantry he was Mentioned in Despatches. Twice more he was hospitalised for shrapnel wounds, one to his hand and another passing through his shoulder without touching the bone. On a separate occasion he was in hospital with pneumonia.

Losses of all ranks serving in the Brigade of Guards were particularly heavy with for him two consequences. First his opportunity for leave and return to Coddington were curtailed. Second he was frequently required to take command of the company when the Senior officers were either killed or wounded in the action. Later he was appointed second in command of his battalion.

Husband and wife wrote almost daily. The majority of his letters from France have survived but none of hers to him. The postal service, even to the trenches in the line, was astonishingly effective. But all his correspondence had to pass through the censor’s office which resulted in a laconic style that forsook descriptive detail. His last letter to his wife at Coddington was dated 13 th September 1916.

On the 15th September he was involved in heavy fighting all day as he led the battalion forward to take the Southern end of a prominent ridge halfway between Ginchy and Le Bonef. The crest of the ridge was the German defensive line and only at the right hand end were German troops still holding out in shell holes and isolated trenches. His day had started at dawn as he led his battalion through what Corporal Murray described as:

“One of the fiercest shell fires we had up to then experienced. There was many a moment when the shells would hide our Captain from us then clear away and leave us wondering if we had ever seen such bravery”.

During the advance he sustained a flesh wound to his arm but only halted to send his soldier servant, Private Miles, back from the front to the transport depot to get food. The pass he wrote on a scrap of paper to authorise the mission survives. In the absence of Private Miles it was Corporal Murray who was at his side as he led the advance up a communication trench towards the forward slope where some of our troops were already established. Second in command was Captain Stirling. He later wrote:
“There was a lot of firing and John was shot and killed instantaneously through the throat by a bullet fired at short range.”

This was at the hour before dusk and Corporal Murray saw him fall. He describes the scene:

“Acting Sergeant Major Clark who was at his side stopped to attend to him but we had to go on as the enemy were still coming on. It was almost half an hour later when I got the chance to go and see how he was that I found Captain Thorpe lying dead with Sergeant Major Clark lying dead a few yards away. There was nothing we could do so we carried him back to our dressing station. We got relieved that night so we carried our Captain’s body back out of range of the guns. He was buried the following afternoon in the Guards cemetery.” 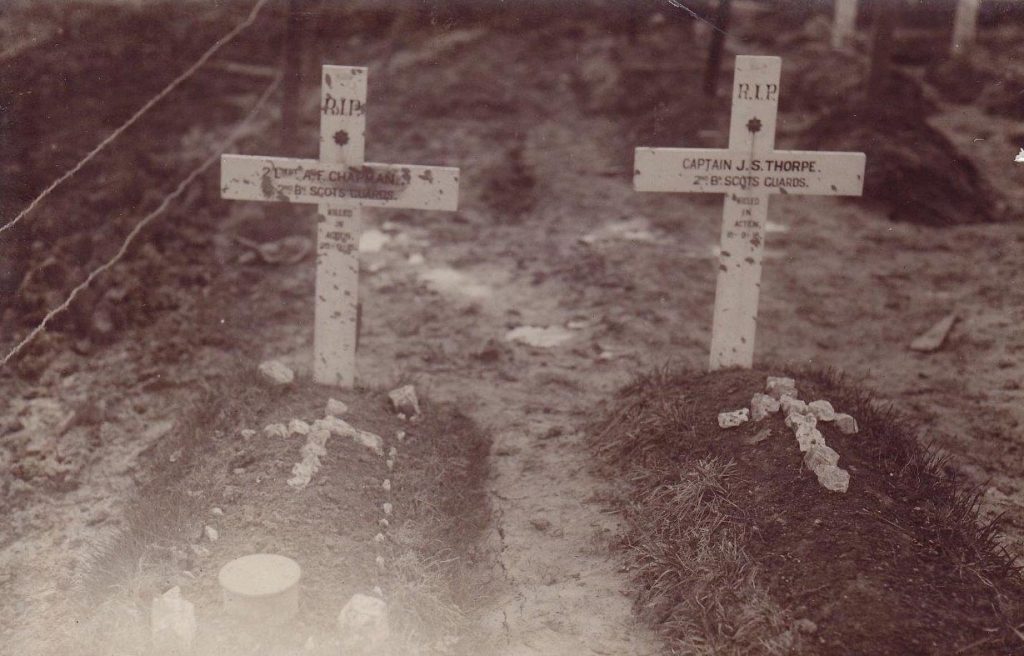 The cemetery was at the village of Carnoy some ten kilometres South East of Albert. The burial was with the Pipe Band and full military honours.

What did his comrades say of him? Here is Captain Stirling:
“I miss old John so much: he had the happy habit of calmness- when things called most loudly for irritation- I never saw him worry or heard him grumble and there are few such.”

“RF Company have not forgotten their late Captain nor will they for he loved them too much and as they speak of him they always speak of him as a ‘Father to the Company’. They mourn his loss very much.”
Private Miles was twice mentioned in letters posted to Coddington. On the first occasion John wrote:
“I have an exceedingly good soldier servant.”

In the second letter he describes him as “a perfect treasure.”

On the 13th October 1916, not quite a month after his death a service was held at Holy Trinity, Sloane Street:

” In memory of the officers, non-commissioned officers and men of the Scots Guards killed in action in France, during the recent fighting on the Somme.”

The full congregation was led by the Prime Minister, Mr Asquith. The officers were listed on the service sheet. They were 14 in number. Heading the list was Captain J. S. Thorpe MC. That was because at the date of his death he had served on the active and reserve lists for 23 years. He was commissioned at 20 and was 43 at the time of his death.

There were more permanent memorials. The Newark Advertiser on 1st May 1918 carried a full report of the service at the unveiling of his memorial in Coddington Church on 28th April. At much the same time the Bishop of Argyll and the Isles dedicated the granite cenotaph in his memory at the door of the church at Ardbrecknish which his father had built and which was accordingly dedicated to St. James.

The survey for his marker is here.