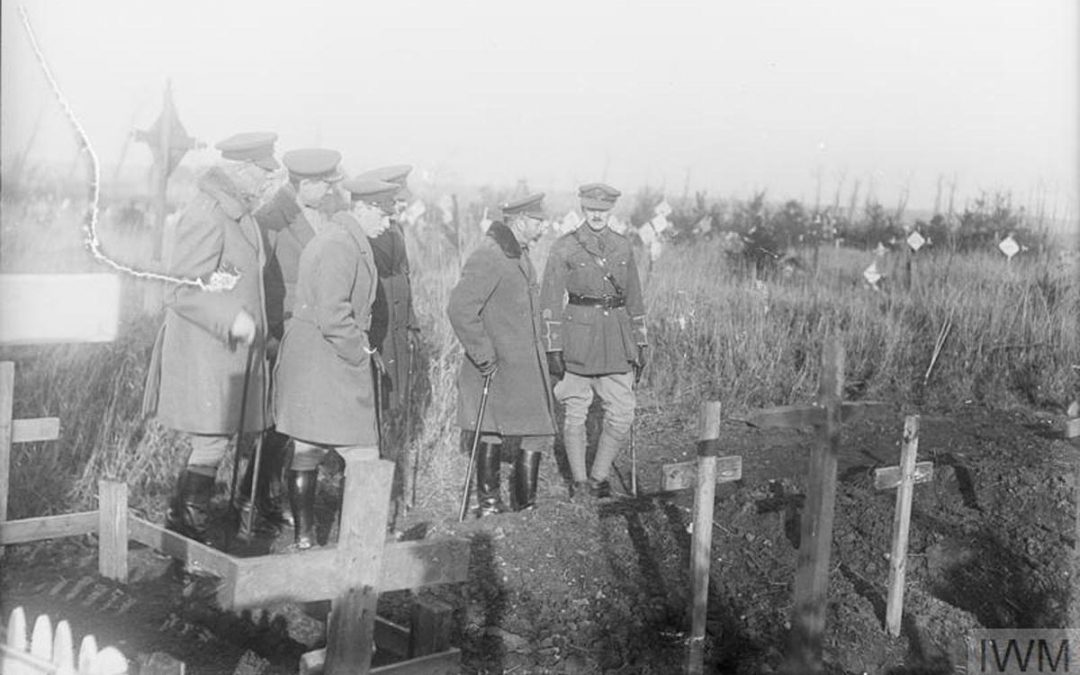 Charles George Mercer-Nairne Petty-Fitzmaurice was the younger son of Henry Charles Keith Petty-Fitzmaurice, 5th Marquis of Lansdowne, and was educated at Eton before being gazetted 2nd Lieut. to 1st Dragoons, The Royal Scots Militia in 1885. He saw active service during The Boer War (1899-1900), taking part in the relief of Ladysmith and later action at Spion Cop and operations within Natal and the Orange Free State. For these services he was awarded the Queen’s medal with four clasps. He later served as aide-de-camp to Field Marshal Frederick Sleigh Roberts, 1st Earl Roberts, VC, who had been appointed Commander-in-Chief of the forces. Following the resignation of Lord Roberts when the CinC post was abolished in early 1904, he returned to regimental and staff duties, being part of a delegation led by the Duke of Connaught to take part in the enthronement ceremonies in Madrid for the young King Alfonso XIII of Spain, and he was awarded the First class of the Spanish Order of Military Merit. From 1909 he was an equerry to the Prince of Wales (later George V), being created MVO in 1911. 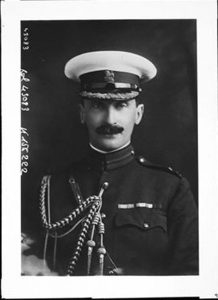 1914 finds Mercer-Nairne serving as a Major with The Royal Dragoons and the extract below details the formation of the 6th Cavalry Brigade, within which the Royal Dragoons were to see action in Flanders:

The history of the Brigade begins with the arrival 1914 of The Royal Dragoons (Lieut. -Colonel F. G. Steele) and the 10th Royal Hussars (Lieut. -Colonel R. W. R. Barnes, D.S.O.) at Ludgershall during the latter part of September, 1914. When the war broke out both regiments were at Potchefstroom in South Africa, where it so happened that they had been training together for two years. The short time spent on Salisbury Plain before the departure for Flanders was fully occupied in completing men, horses and transport to strength. There were a large number of time-serving soldiers in each regiment so that few reservists were required. The 3rd Dragoon Guards nominally formed part of the Brigade, but their sailing from Egypt had been delayed.

Early on 6th October the Brigade entrained, the Royals at Amesbury and the 10th Hussars at Tidworth. Most of the mobilisation equipment and all the G. S. limbered wagons had only arrived the previous day, and it was a matter of consider- able difficulty to get harness fitted and other preparations made in time. The Brigade embarked at Southampton. As the ships had to be filled to their utmost capacity and the embarkation authorities were not concerned about different units but only numbers, the. troops were thoroughly mixed up. The headquarters of the 6th Cavalry Brigade were on the S.S. “Algerian ” with Lord Hugh Grosvenor’s squadron of the 1st Life Guards, while the headquarters of the 7th Cavalry Brigade were with a squadron of the 10th Hussars. The 3rd Cavalry Division filled fourteen transports, which early on the 7th were escorted to Dover, and then to the Downs. Here the convoy waited till dark, when it steamed under an escort of twelve destroyers to Ostend and Zeebrugge, arriving at the coast about 1.0 a.m. on the morning of the 8th. The greatest care had to be taken in crossing the Channel, as the convoy had to pass through an intricate mine field. During the day the Brigade disembarked and camped on the Ostend race course, being joined by headquarters and two squadrons of the Royals, who marched from Zeebrugge.[2] The 6th Cavalry Brigade made it’s way following disembarkation to the area to the east of the town of Ypres, forming part of the line seeking to stop a German breakthrough. By October 30th 1917, the Cavalry were holding “a line very lightly somewhere to the north of Chateau de Hollebeke[3],” Klein Zillebeke. Mercer-Nairne was positioned within the chateau repulsing German advances, and it was during this action that he lost his life at the age of 40. As stated: During this action Lord Charles M. Nairne (Royals), Captain Kinkead, R.A.M.C. (attached 10th Hussars) and 2nd-Lieutenant Burn (Royals) were killed. Lieutenant A. Peyton (A.D.C.), Major B. E. P. Leighton, Lieutenant C. G. W. Swire and Lieutenant H. M. P. Hewett (Royals), Major C. W. H. Crichton, Captains the Hon. H. Baring, E. A. Fielden and G. C. Stewart (10th Hussars) were wounded. Captain H. Jump (Royals) was missing. He was so severely wounded it was found impossible to move him from Hollebeke Chateau and he was captured.* Twelve men were killed, 37 wounded, 3 wounded and missing, and 4 missing.[4]

For his actions in Flanders, he was subsequently awarded the Legion of Honour (France). Following his death Mercer-Nairne was buried on the battlefield, and the photograph below, courtesy of Lord Lansdowne, shows the cross in-situ. (The depth of the cross in the ground certainly accords with the soil evidence on the cross now located in St Mary’s Church, Calne.) On the reverse of the photograph frame of the battlefield cross is a hand drawn map showing the exact location of the in-situ cross (photo below).  Mercer-Nairne is now buried in Ypres Town Cemetry Ypres Town Cemetery, Zonnebeekseweg/N332, 8900 Ieper, West-Vlaanderen, Belgium (photo of headstone below). The intriguing element to this story is why the original battlefield cross wasn’t returned to Bowood and the Lansdowne family, but somehow found its way to the church of St Michael’s in Calne. 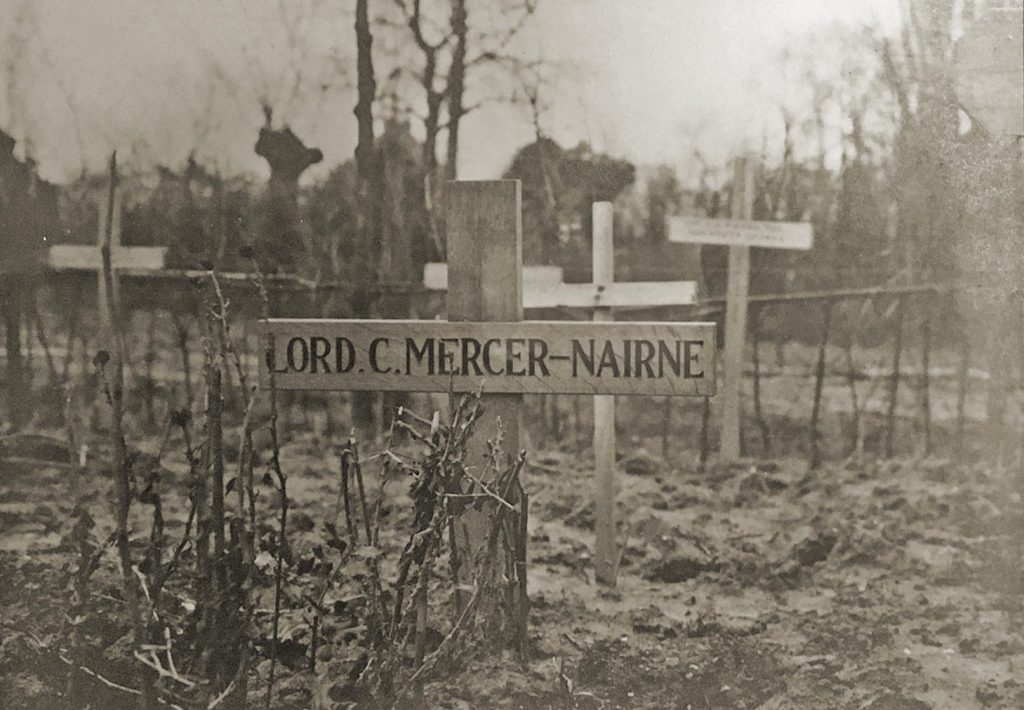 The cross within the chapel at Bowood is certainly a commemorative rather than an original cross, and we will post further findings into this puzzle as and when we come across them.

His report on the crosses is here 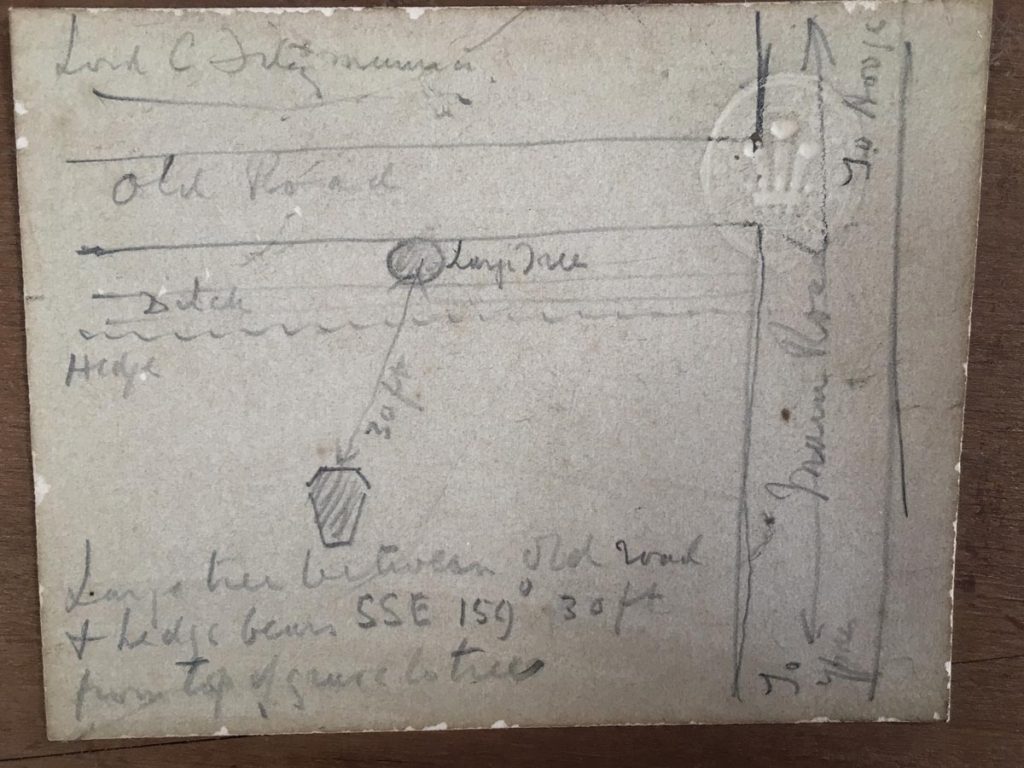 [3] C.Able-Smith, From Eton To Ypres: The Letters And Diaries Of Lt Col Wilfrid Abel Smithhttps://books.google.co.uk/books?id=yhLDAAAQBAJ&pg=PT66&lpg=PT66&dq=klein+zillebeke+chateau&source=bl&ots=bwvLP7nNBO&sig=XRMeKwmuCUZh_q9XUJnzOudl0GI&hl=en&sa=X&ved=0ahUKEwid0dyFlOTPAhUSM8AKHV8PDAUQ6AEIMTAE#v=onepage&q=klein%20zillebeke%20chateau&f=false