Project update – Isle of Wight to the Isle of Skye

We’ve all been busy it would seem. We’ve had a lot of surveys and reports sent in and also a lot of photos. I should make it clear I guess at this point that we don’t mind at all if people don’t fill in a complete report, anything that helps is fine, we are led by you, so if you have a photo of a cross or marker that you may have taken in the reasonably near past, please by all means send it in with any details you can remember. We would rather catalogue everything and know where it is/was than have holes because you haven’t got a tape measure in your car. Currently I think we have around 25 which aren’t complete, and 20 which are.

The reports come from across the country, we have a couple of large multiple cross sites being worked on, Ian Spelman in particular has made some inroads at Cheltenham Cemetery which has a huge collection still, one that was once considerable larger, but over 20 still exist. An appointment has been made to go to Cavendish and get behind the perspex to see their lovely collection by Andrew Macdonald, Jason Kercher, and if I can get out of the office for a bit, me. Geoff Sullivan has already sent in a particularly fine report on Deddington which has a really interesting collection of both Returned crosses and what appear to be native ones that date from after the war. It raises some interesting questions about how communities remember and grieve, and the ritual and symbols of that process and how they integrate with each other and with the people that suffer the loss. John Vigar has also provided us with a few unknowns and out-lying markers on his travels. Also Eammon Handley who visited a couple of locations in Northumberland for us. Also Charlie Eve and Andy Arnold, both old hands in the business of the First World War who have been keeping themselves occupied around Surrey, London and the Isle of Wight. And also pointing patterns out to us that we don’t always see because we’re standing to close to the growing list of crosses.

Scott Galloway has made considerable headway in Scotland both recording and finding new location in an area that seemed like it was quite lean initially, we have a cross from Portree the Isle of Skye, Portree itself has it’s own very individual Great War story (which you can read here). There are others in the pipeline too, We need to thank Scott as much as anything for becoming our North of the border PR arm; he’s managed to put out feelers both via the Western Front Association in Scotland and via his local Diocese which is making returns. He has also encouraged a friend out into the countryside in Nottingham, and we have a fair few reports coming up from Geoff Snare in Nottinghamshire which will soon be on the website.

We are also making more headway in Wales. There is some excitement at the prospect of Hedd Wyn, the poet’s cross still existing. This is down to the Royal Welch Fusiliers Museum in Caernarfon Castle who led us up to it, we just need someone to go and take a look at some point, an email has been sent to Llys Ednowain Heritage Centre, Trawsfynydd, Gwynedd to try and find out more. This and a conversation or two also led us to wonder how many other well-known crosses there were hiding, and the answer was almost immediately answered by finding both Albert Ball VC at Trent College Chapel and Noel Chavasse VC in Oxford. Both still exist. Victoria Cross holders alone takes us down another avenue too, there are at least seven, one of whom John Lynn in Bury, Manchester. I feel is all the more special as he was just a Private (pictured in an illustration from War Illustrated below). This of course raises the question about other decorations, it’s difficult to ascertain at the is stage as all we have is raw data, but one day… 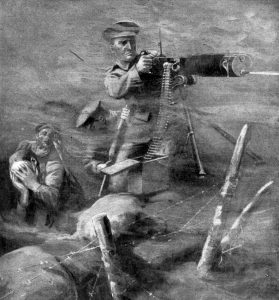 Margaret and Bev in Merseyside have continued to pull in lots of markers, they get about and have covered not just Liverpool but bits of Cheshire, North Wales and Lancashire, they are a pretty formidable pair. There continues to be a concentration of unknown soldier’s markers which is interesting, almost as if there was some kind of delivery that took place. We haven’t as yet managed to ascertain if this is true and if it is the case where from, British Legion, Toc H or IWGC possibly, we don’t yet know. Bev has also just covered some of Sussex while on a visit, one of which Ringmer is live on the site. And Jason Kercher covered one in Cumbria at Grasmere. What we’re also seeing is the interest around the buildings and surrounding heritage, Jason being a case in point, the history at Grasmere goes far deeper, a cross in the company of Wordsworth.

It is also worth mentioning, we’re hoping to start mapping these very soon, I personally have a couple of volunteers already, whether they know it or not yet is another matter. If anyone would like to help with this we would be grateful. Before we can we start we need to work out a process and be reasonably sure we are fairly up to date, which unfortunately we aren’t. If anyone knows anyone who would be interested in helping admin teh site, we could also do with assistance with this, some experience of WordPress would be preferable.

It’s worth exploring beyond the obvious in most cases, a quick walk around can often reveal far more about how an environment is peopled, how a landscape works and where the community sit within it. We live in an age of declining church use as a religious institution, where quite often the buildings are in the charge of organisations that maintain them, or have a markedly different infrastructure to the ones these men and their families would have known, some converted to theatres, venues, even antique centres, it’s still part of the history.

It’s worth bearing in mind your visits and the information that gives us will help keep these buildings alive. We have found various examples along the way where the church has mislaid the significance of what these objects are and their relevance to the locale, people and the historic tumult of the twentieth century. And how they define a point in a story that still goes on and is still connected to the community in most cases. It adds another sword to the armoury in terms of how these buildings and institutions survive in the future, whilst most remain in use, some don’t. We hope this project will continue to be something that will get people into these building and get them absorbed in the history that hides there on the walls and between the hard stone, soft kneelers, and hand-polished pews as much as it does in the pixels of digitised church records or the yellowing papers of parish and county archives. It’s there to be explored, If we can help get that to happen, more footfall can only benefit our heritage which is a good thing, something to be glad about. Thanks to everyone involved so far, it’s all of you who are making this all happen.

Header Photo: Brooks, Ernest (Lieutenant) (Photographer) – http://media.iwm.org.uk/iwm/mediaLib//228/media-228650/large.jpg This is photograph Q 1308 from the collections of the Imperial War Museums.