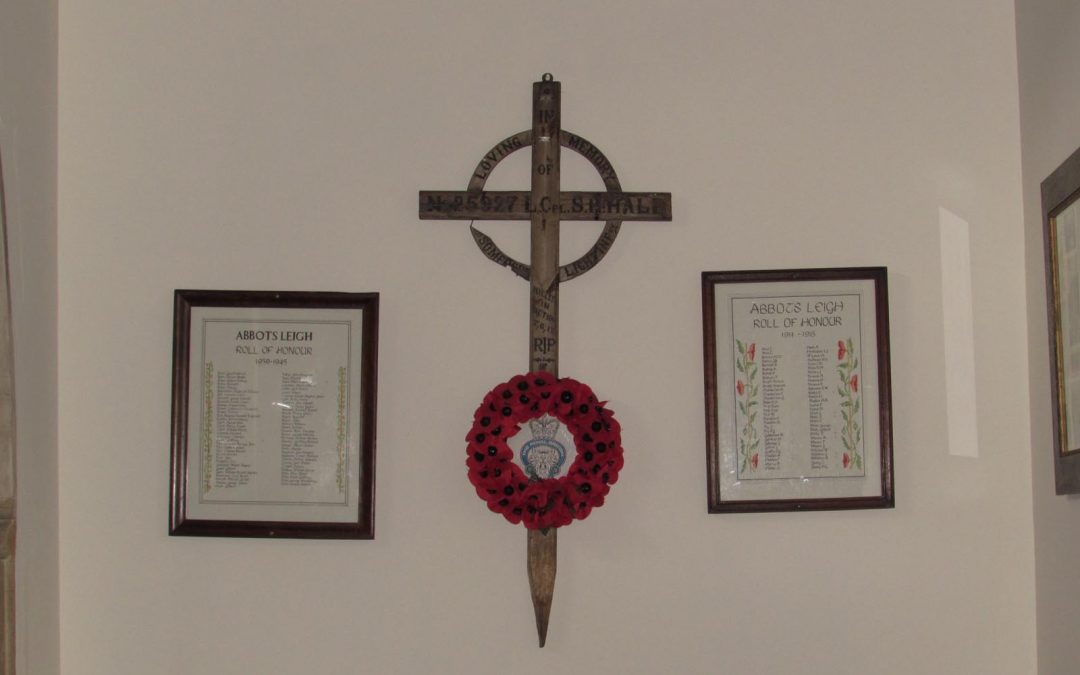 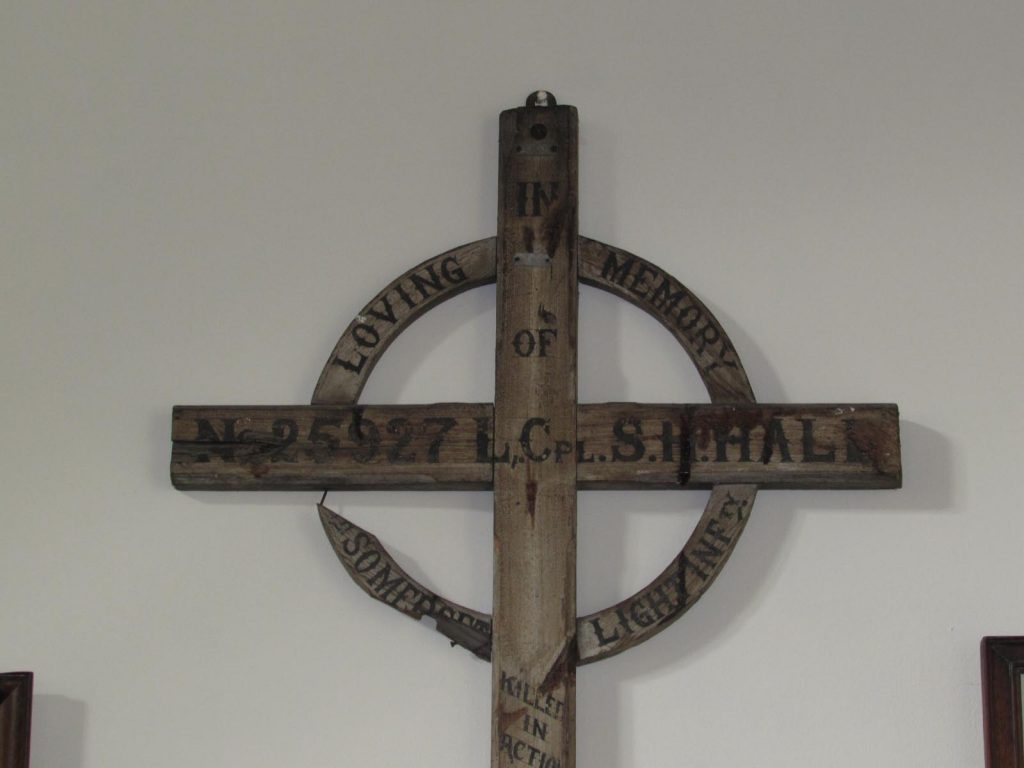 Cross dimensions (millimetres please)
Shaft Height: Not recorded (the cross is positioned too high to reach the top, it is probably over 1450mm high)
Cross beam width: 675mm
Width of wood: 77mm
Thickness or depth: 33mm

Circle plate (if celtic type)
Outer diameter: Not measured; 178mm vertical from base of the cross shaft to the outer circumference of the circle (measured on lower right hand side of cross only)
Width of circle: 36mm
Thickness: 20mm

Other information
Mounting to wall: On the wall of the west end of the south aisle, near two framed rolls of honour; not fixed to the wall, the cross hangs from a nail just above the top of the shaft
Detailing: Some front edges of the shaft and beam have been bevelled
Evidence of use in field (earth marking, cracking, staining, shrinkage): Staining on bottom tip of shaft
Surface insertion depth (into ground if apparent): Not recorded, but visible in photograph
Finish (varnish, paint, oiled, unfinished etc): Some kind of finish (paint or varnish), with lettering painted in black
Condition (cracked, paint peeling, woodwork, damage etc): Some scuff damage to shaft, including slight blurring of part of the inscription; more significant damage to the bottom left part of the circle plate, which shows signs of ad hoc repairs (using nails?)

Notes and observations:
A hook has been added to the shaft below the inscription, which has been used to hang a Royal British Legion poppy wreath

L/Cpl Hill died on 07/06/1917, aged 36, and is buried in Lagnicourt Hedge Cemetery, Pas-de-Calais, France (I. A. 11.). The CWGC records say that he was the son of John and Harriet Hall, of Pill, Somerset; and husband of Nellie Maud Hall (nee Hare), of Severn View, Abbots Leigh, Bristol.

I have not checked the 7th SLI’s war diary, but there is the following paragraph in: Brendon Moorhouse, Forged by fire: the battle tactics and soldiers of a World War One battalion: the 7th Somerset Light Infantry (Staplehurst: Spellmount, 2003), p 138:

“On the following day [7 June 1917, near Favreuil] three men from the battalion were killed by an enemy sniper who was variously identified as operating from an advanced enemy post that was on the road to Pronville, or hiding in the long grass. Four other men were killed by shellfire.” 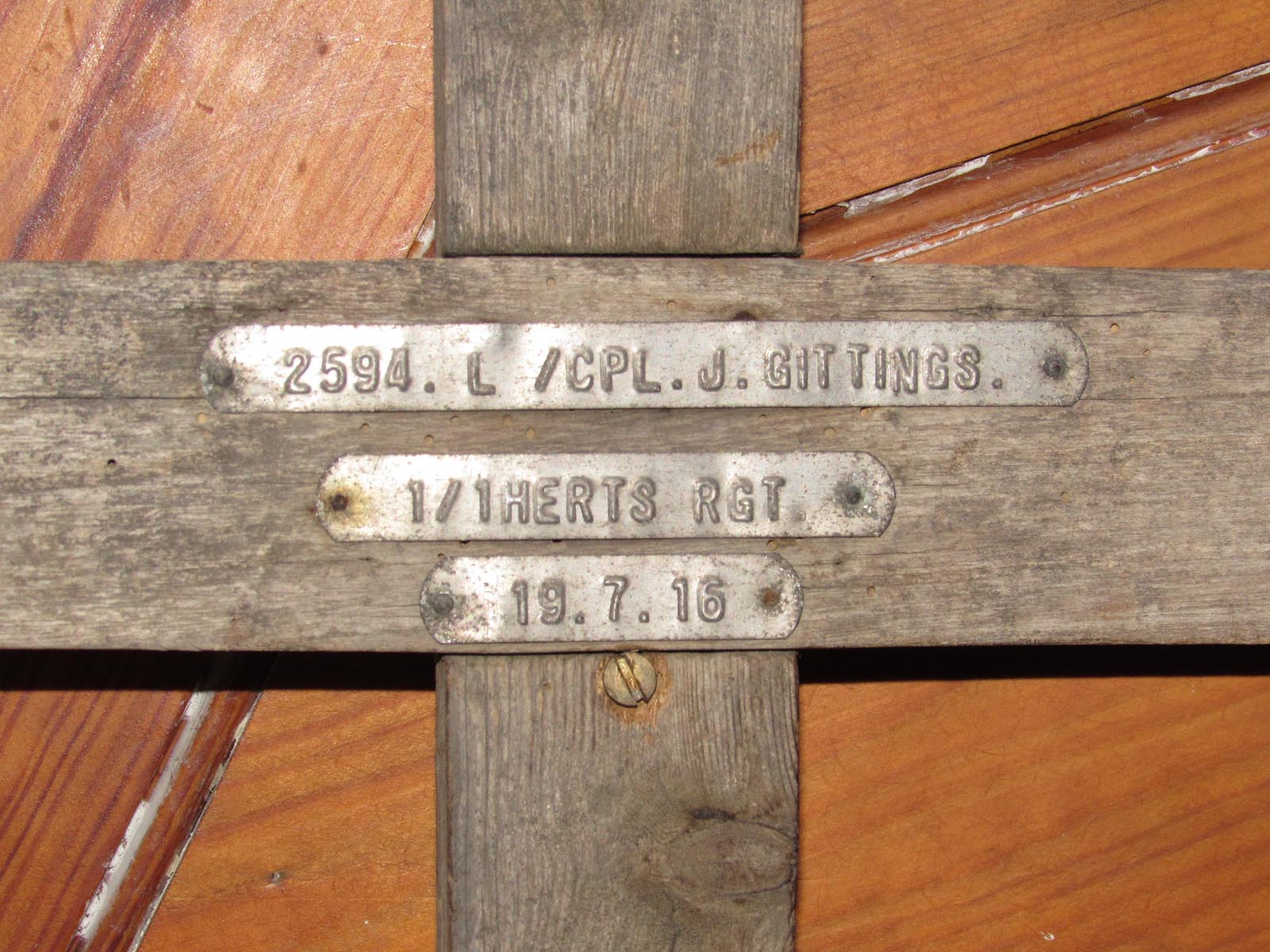 Other information
Mounting to wall: None; currently stored loose at the back of the church resting on bench at the west end of the south aisle, near framed rolls of honour for both wars, a framed display on the dedication of the war memorial, and the other battlefield cross
Detailing:
Evidence of use in field (earth marking, cracking, staining, shrinkage): Slight staining, including traces of soil
Surface insertion depth (into ground if apparent): Not recorded
Finish (varnish, paint, oiled, unfinished etc): Some kind of finish is visible on the top of the beam
Condition (cracked, paint peeling, woodwork, damage etc): Slight signs of woodworm (not sure whether this has ever been treated); the beam has also worked its way out from the shaft slightly; a screw has been fixed to the shaft just below the beam — not sure whether this was an attempt at repair or part of an earlier fixing
Notes and observations:

The name of J. W. Gittings also appears on the war memorial cross in Abbots Leigh churchyard. He died on 19/07/1916 aged 28, and is buried in Le Touret Military Cemetery, Richebourg-l’Avoué, Pas-de-Calais, France. The CWGC registers state that he was the son of Mr. and Mrs. C. Gittings, of The Priory Gardens, Abbots Leigh, Bristol. More detail (and a newspaper photograph) is provided in the memorial book available inside the church. This provides the following information:

“James Walker Gittings was born in Dunster, Worcestershire in 1888. His parents Charles and Emma Gittings lived at The Tynings, Moor Hill Cottages in Failand. James was the eldest child, with two younger sisters Mabel and Anna. James lived for a time at Wooton-under-Edge, but subsequently worked, like his father, as a gardener at Tyntesfield near Wraxall, living in 1911 in The Bothy at Tyntesfield with four other gardeners.
He enlisted in the 1st Battalion Hertfordshire Regiment in 1914, was amongst the first troops to arrive in France, fought at Ypres and the Somme but was killed in action in July 1916 aged 28.

Charles and Emma, moved to Abbots Leigh sometime between 1911 and 1916, The War Record of their son James is given as ‘The Priory Gardens’ which at the time lay within the grounds of The Priory. This later became Priory Cottage when Priory and its grounds were sold in the 1950s. Charles and Emma died in 1936 and 1931 respectively.” 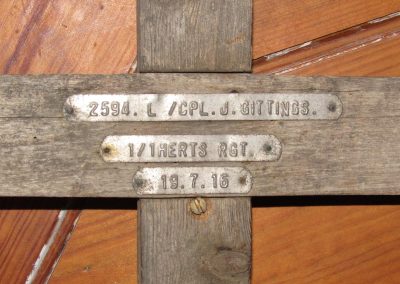 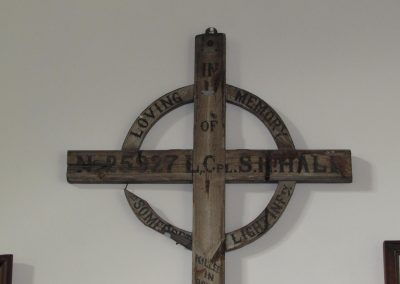 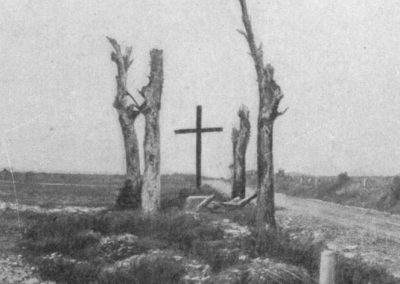 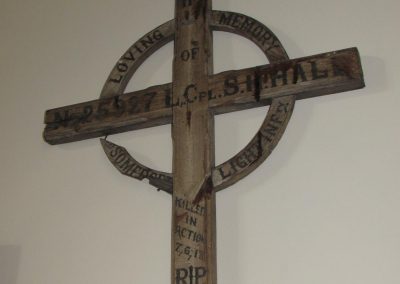 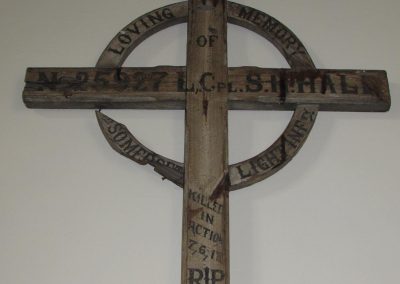 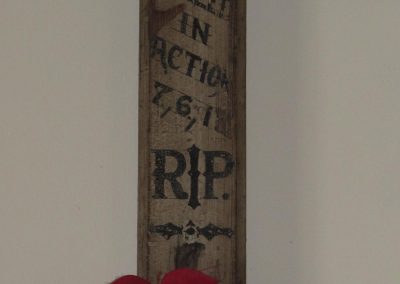 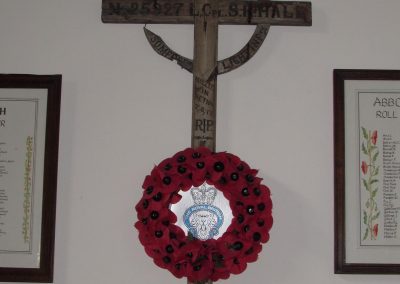 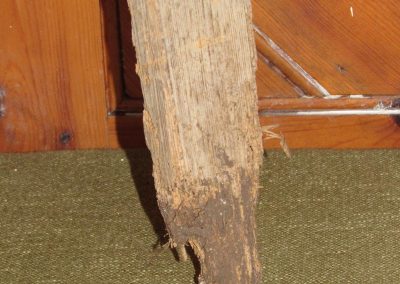 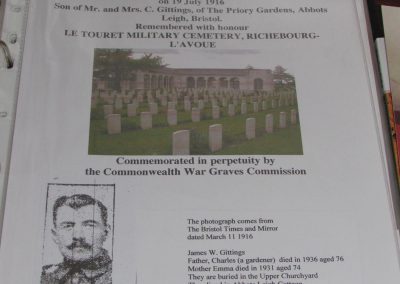 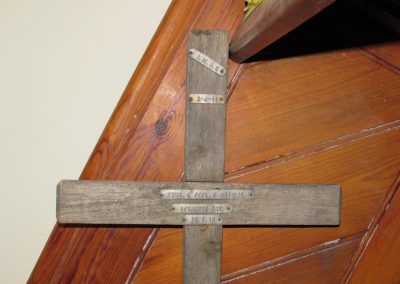 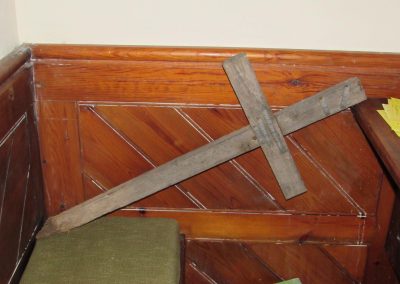 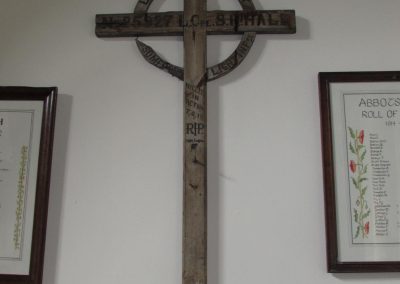 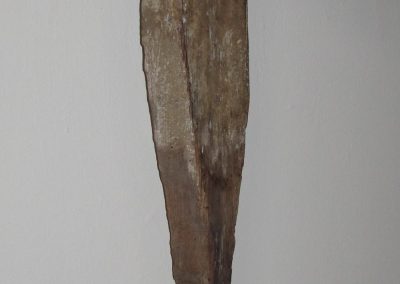 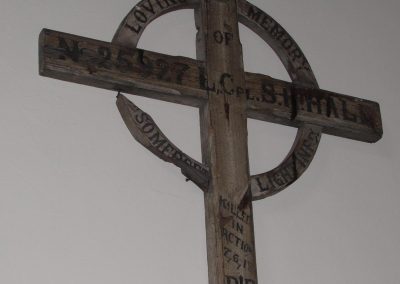 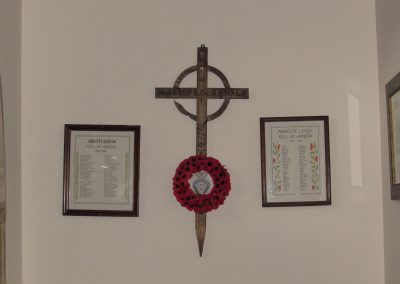 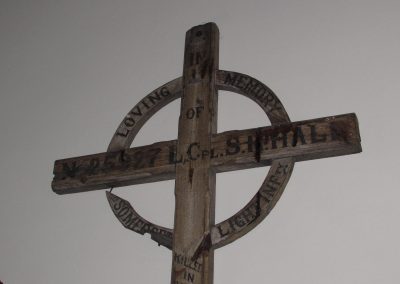 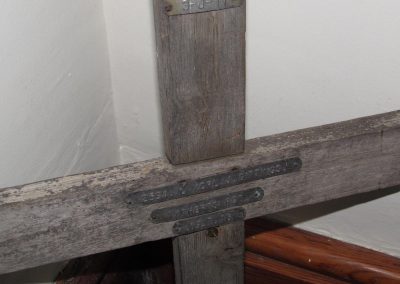 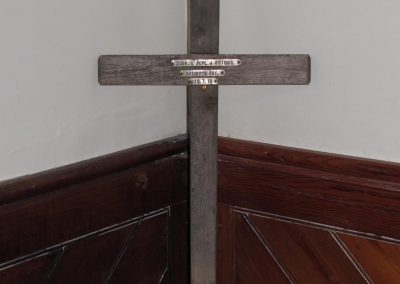 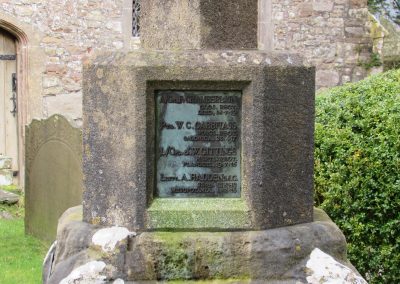 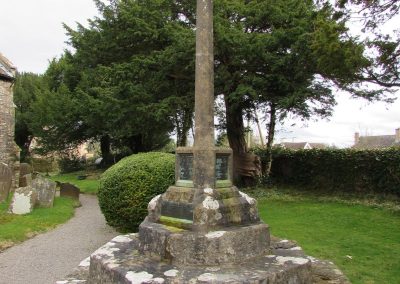 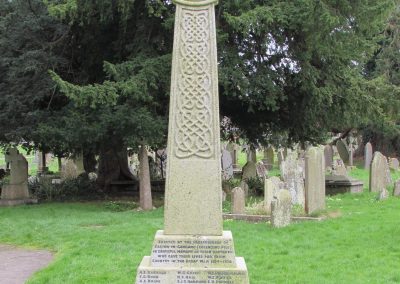 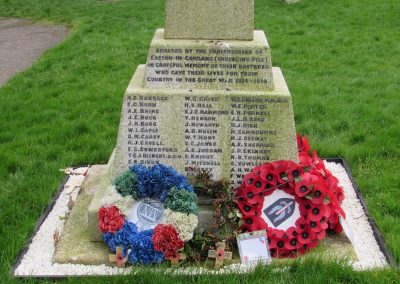