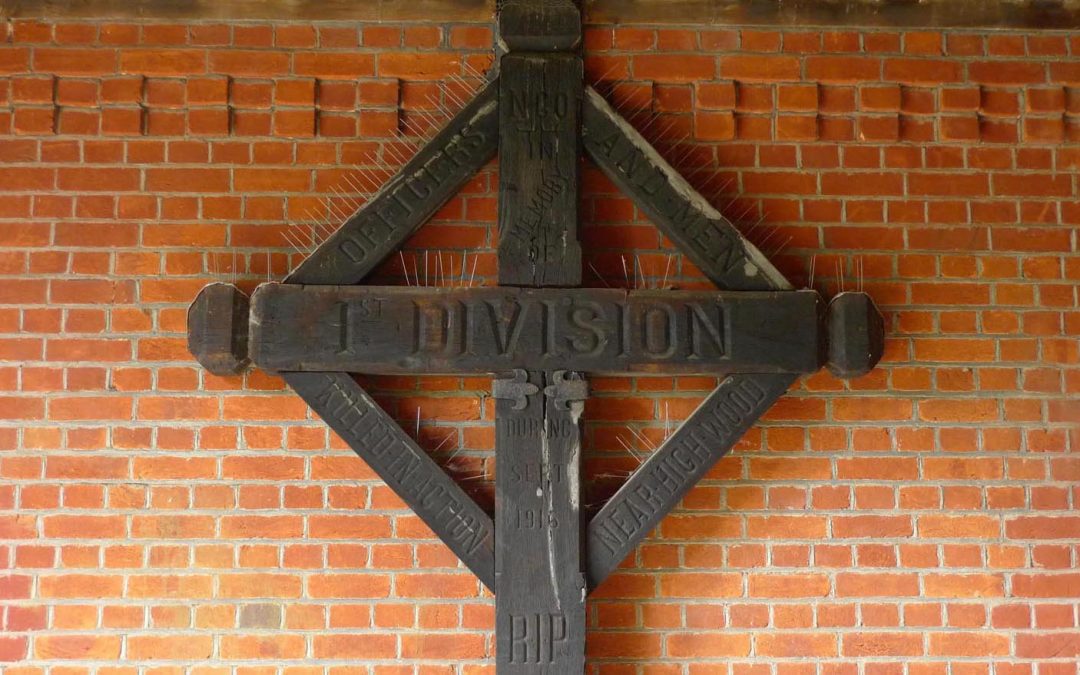 Standard cross with four cross-pieces surrounding the intersection of the main shaft and the main cross beam. The cross is mounted on top (and partly into) a concrete base of 4 steps.

Upper part of main shaft:
NCO IN MEMORY OF

Full text as (presumably) intended to be read:

At the foot of the cross, on the left-facing side is carved 23RD FIELD COY RE

Cross dimensions (millimetres please)
Shaft Height: Approx 3360mm (estimate only as it is too tall! I measured a brick and one row of mortar as being 80mm, and the cross is some 42 of these ‘units’ tall from the visible base to the top.
Cross beam width: Approx 1980mm
Width of wood:228mm
Thickness or depth: 139mm

Other information
Mounting to wall: The cross is fixed into the concrete steps at the base to an unknown depth. There is a fleur-de-lys shaped bracket on the front of the base and a further two where the cross-beam meats the main shaft.

Detailing: Simple carved wording into the wood. Several visible bolts holding the cross together. Fleur-de-lys brackets as mentioned above.

Evidence of use in field (earth marking, cracking, staining, shrinkage): None visible, but see comment on repairs below.

Condition (cracked, paint peeling, woodwork, damage etc): Visible damage to the top surface of the upper-right cross-piece. Repaired with concrete-like substance. Evidence of major fracture across the main shaft 1200mm above the base. Again, repaired with concrete/cement material. Damage to right side of main shaft below the 1200mm break. Repaired with cement/concrete. Significant pieces of replacement wood at the foot of the main shaft – where it appears that newer pieces of wood from a different source have been fixed to the cross then painted to match the staining of the main piece. Could this be to repair damage from insertion into the ground at various times. Anti-pigeon prongs along all the upper surfaces.

Notes and observations
The Aldershot Garrison Chuch (CofE) is located near the Wellington statue, just off the Farnborough Road. Not to be confused with the Church of Scotland and RC churches nearer the centre of the garrison.

The cross is on the west side of the south porch (left side as you approach the church up the appropriately named Old Contemptibles Avenue! As such it is open to visit at any time, but protected from the worst of the elements.

In the porch, next to the cross is a picture representing the original cross as it was on the Somme. No indication of artist, date or authenticity. A tank is included in the picture which is consistent with the September battles where they appeared around Flers. (I stand to be corrected by the experts if necessary).

Note that this cross is ‘only’ remembering the September battles, which according to the www.longlongtrail.co.uk were for the 1st Divitsion, the Battles of Pozieres, Flers-Courcelette and Morval.

On the east side of the porch, opposite the cross is a brass panel which gives further information about the history of the cross. The text reads:-

1ST DIVISION PORCHWAY
The final resting place of the cross on the wall opposite.

Dedicated to the members of
The 1st Division British Expeditionary Force 1914-1918
In January 1917 this cross was constructed and erected
in “High Wood” by the 23rd Field Company, R.E. to the memory
of the officers and men of the 1st Division who fell on
The Somme. The timber was obtained from ruins in Bazentin.
In the summer of 1927 the cross was brought to England
and set up in front of Headquarters 1st Division, Aldershot.
In January 1939, the 23rd Field Company, R.E. reconstructed
this porchway and moved the cross to these precincts.

The cross therefore spent 10 years in-situ on the battlefield before being moved to Aldershot. Then, after another 12 years it was moved to its current position. The damage could therefore have been done at any time either during the last 22 months of the war, in the subsequent time in France or during it’s moves in 1927 and 1939. Not sure when the concrete/cement would have been a popular choice for repairing wood. 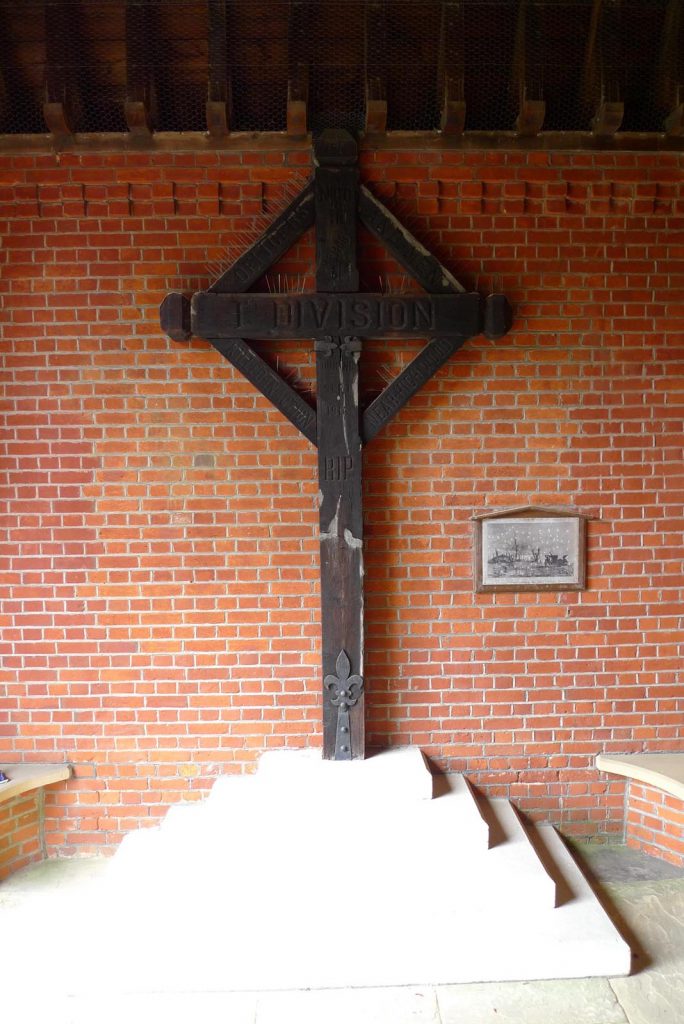 Survey and Photographs courtesy of Alasdair Mackie
Date of survey: 18/10/2016 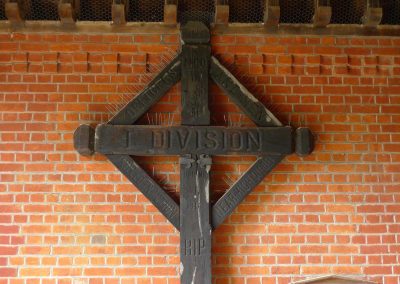 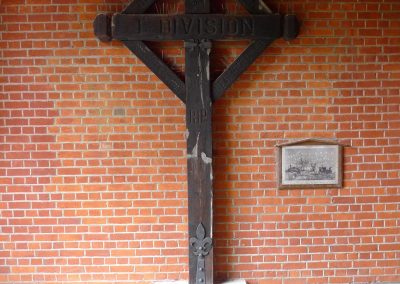 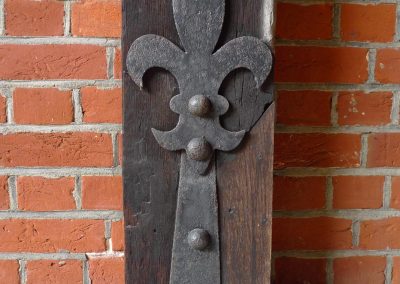 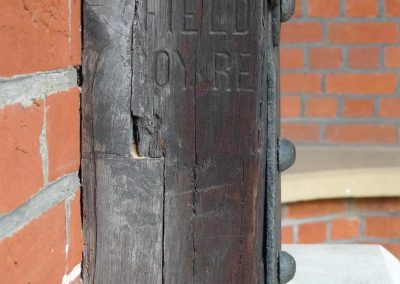 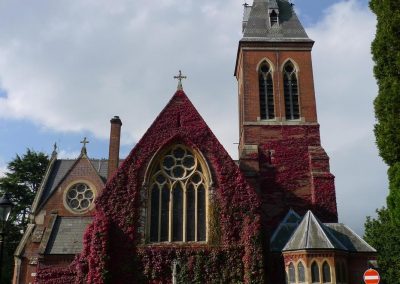 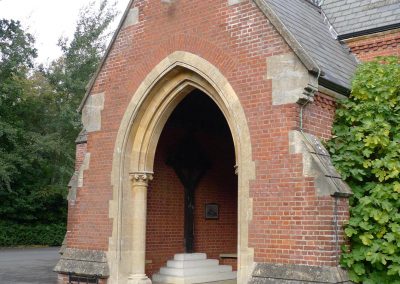 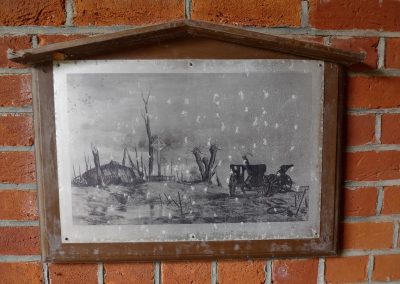 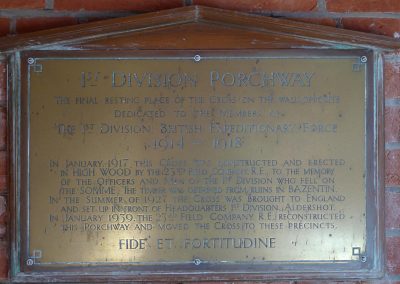 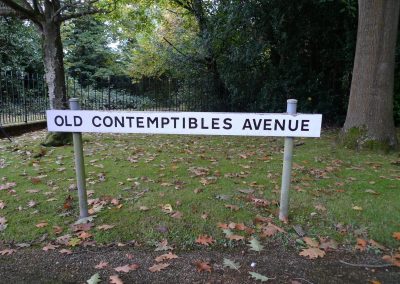 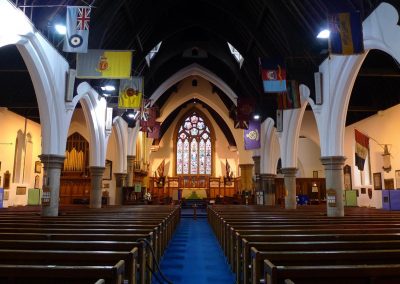