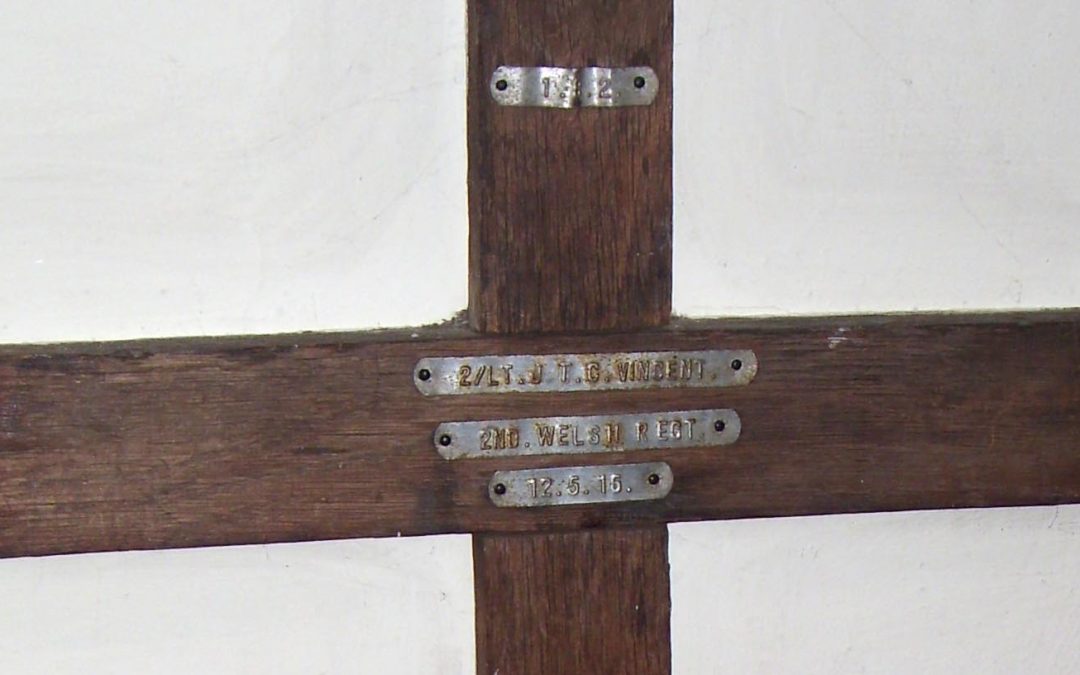 Bangor cathedral church has a very long history dating back to the foundation of Deniol’s cell in the sixth century. It suffered at the hands of the Vikings and the English. It still stands and has it’s own cross from the Battlefields of the First World War. The name Bangor itself comes from the word for teh fence that originally surrounded it.

Cross Dimensions:
Unavailable but appears to be a Standard British Army cross in pitch pine.

Biographical notes and observations:
The cross is positioned under a stone memorial to James Vincent, which reads:

THIS STONE IS ERECTED IN LOVING AND GRATEFUL
MEMORY OF JAMES TREVOR CRAWLEY VINCENT
2ND LIEUTENANT OF THE 2ND BATTALION OF THE
WELCH REGIMENT WHO WAS KILLED WHILE
LEADING HIS PLATOON AGAINST THE GERMAN
TRENCHES AT RICHEBOURG ST VAAST ON THE
9TH DAY OF MAY 1915 AGED 19. HE WAS
THE ONLY SON OF HUGH CORBET AND BRONWEN
ADELAIDE VINCENT OF BRONNWYDD, TREBORTH:
GRANDSON OF THE REV. JAMES CRAWLEY VINCENT
VICAR OF CARNARVON AND PREBENDARY
THOMAS WARREN TREVOR: A GREAT GRANDSON OF
THE VERY REVEREND JAMES VINCENT VINCENT
SOMETIME DEAN OF THIS CATHEDRAL CHURCH.
HE LOVED TO GIVE AND GLADLY GAVE HIS LIFE.
THIS STONE WAS QUARRIED FROM HIS HOME AT TREBORTH.

Lieutenant Vincent was the only son of Mr. Hugh Gorbet and Mrs. Bronwen Adelaide Vincent, of Bronwydd, Treborth, Bangor, and the grandson of the late Rev. James Crawley Vincent, Vicar of Carnarvon. He was educated at Oswestry and Rugby Schools, and at the Bangor University College. He joined the Welsh Regiment, and took part in the battle of Neuve Chapelle, and was killed while leading his platoon against the German trenches at Richebounj St. Vaast, in which no fewer than six young Lieutenants of the Welsh Regiment, including Lieutenant Vincent, fell mortally wounded, May 9th, 1915. He was 19 years of age. 1.

“He loved to give and gladly gave his life.”

His father played Rugby for Wales. 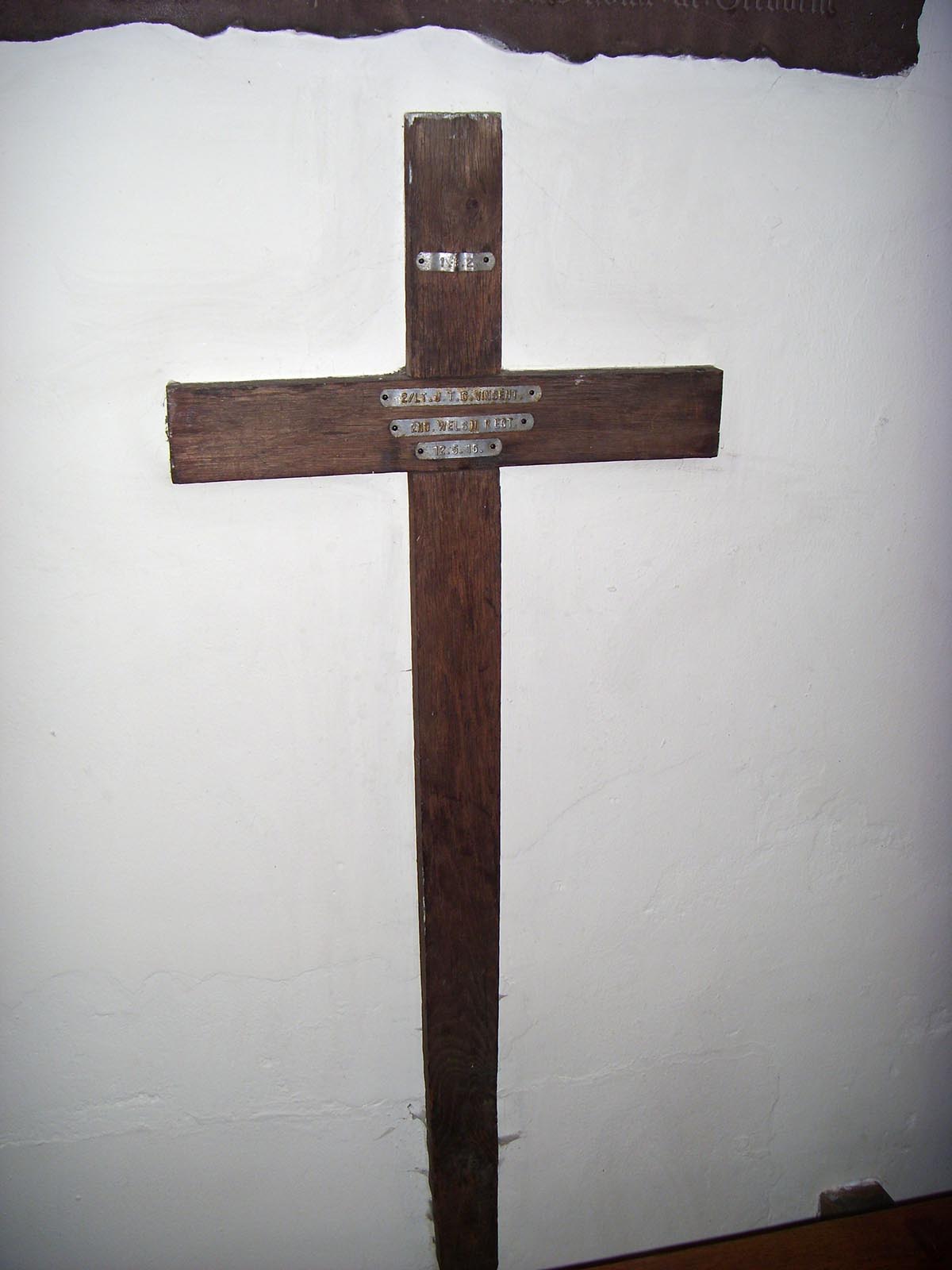 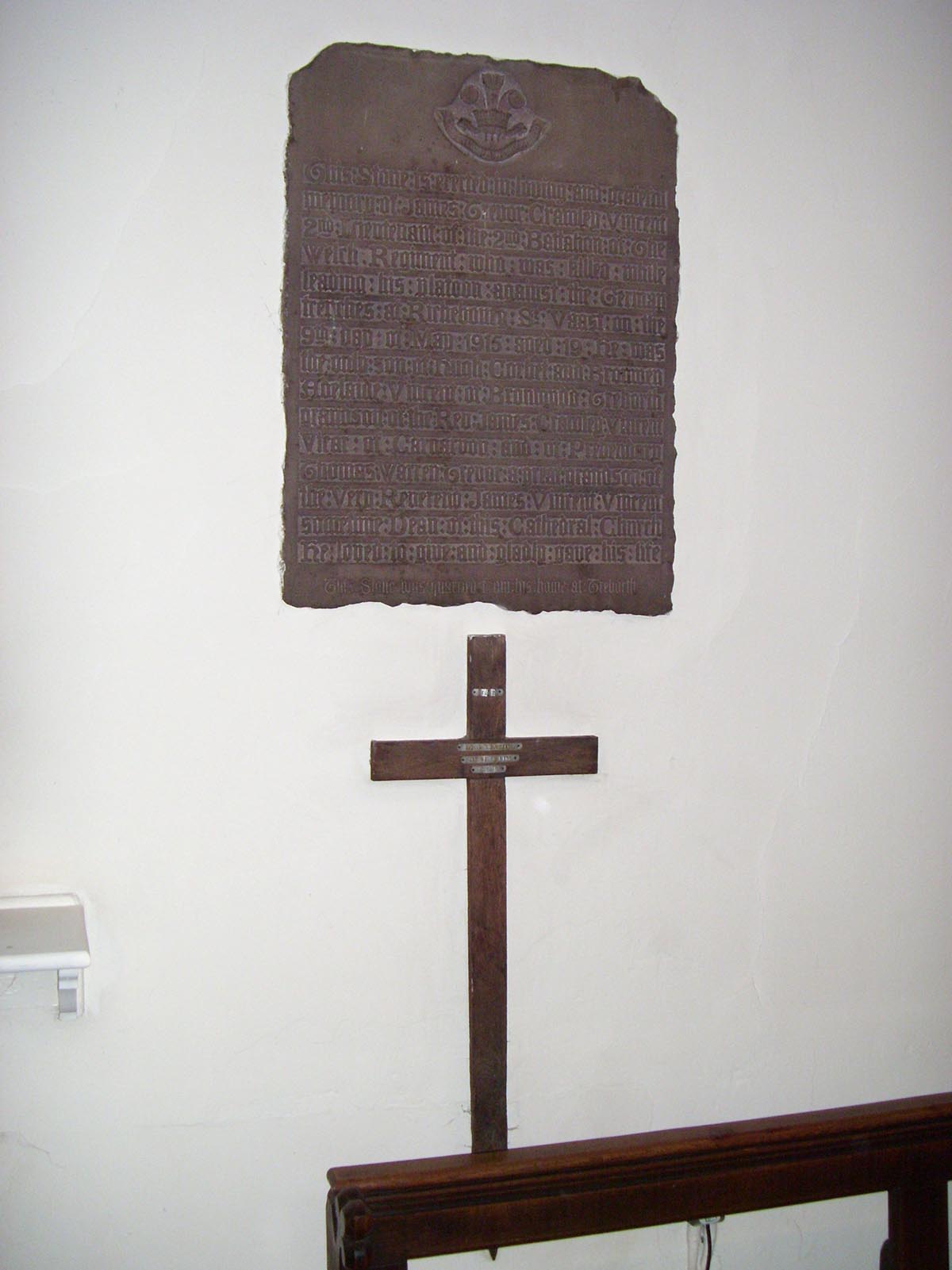