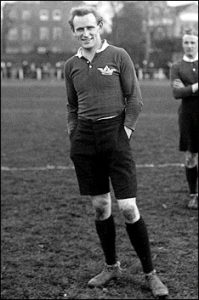 Ronald ‘Ronnie’ William Poulton (later sometimes Poulton-Palmer) (12 September 1889 – 5 May 1915) was an English rugby union footballer, who captained England and was killed in the First World War. Born in north Oxford, he was the son of Sir Edward Bagnall Poulton, the zoologist and his wife Emily Palmer. He was educated at the Dragon School, Rugby School, and Balliol College, Oxford. Poulton played for Balliol College, Oxford University RFC, Harlequins and Liverpool F.C. Poulton is one of three men to score a hat-trick of tries in The Varsity Match – he scored five, still the individual record for the fixture, in 1909. He captained England during the 1913–14 unbeaten season (now what would be called a ‘Grand Slam’), scoring four tries against France in 1914, in the last test match prior to the outbreak of World War I. Poulton was renowned for his elusiveness and glamorous style of play – “the very mention of swerving sends ones thoughts to the late Ronald Poulton, the swerver par excellence … swerving and Poulton are almost synonymous terms”

After leaving Oxford and stepping down from the Officers’ Training Corps, Poulton moved to Reading in January 1912, where he was commissioned into 1st/4th Battalion Princess Charlotte of Wales’s (Royal Berkshire Regiment) (Territorial Force) in June of the same year, and promoted to the rank of Lieutenant in July 1913. At the outbreak of the First World War in August 1914, Poulton answered the call to volunteer for overseas service. He wrote to his parents saying: “Darling parents, nothing counts till this war is settled and Germany beaten. You can’t realise in Australia what is happening here. Germany has to be smashed, i.e. I mean the military party and everybody realises and everybody is volunteering. Those who are best trained are most wanted so I would be a skunk to hold back.”

The battalion was sent to Chelmsford and remained there in training until 30 March 1915, when it departed for the Western Front. His experience of the war was brief. On the morning of 5 May 1915, Poulton was involved in repairing a trench, in the vicinity of Ploegsteert Wood in Belgium, when he was shot by an enemy sniper. His commanding officer, Lieutenant Colonel Thorne, wrote that his death must have been instantaneous.  Captain Jack Conybeare, Oxfordshire and Buckinghamshire Light Infantry, a school friend from both OPS and Rugby, wrote later that day: “I was talking to one of the Berks’ officers this morning. He told me that Ronald was far and away the most popular officer in the battalion, both among officers and men. Apparently he was standing on top of the parapet last night, directing a working party, when he was hit. Of course, by day, anyone who shows his head above the parapet is courting disaster; in fact if one is caught doing so one is threatened with court-martial. At night, on the other hand, we perpetually have working parties of one kind or another out, either wiring, repairing the parapet, or doing something which involves coming from under cover, and one simply takes the risk of stray bullets.”[64]

Three weeks earlier, on 14 April he had captained a South Midlands Division team to a 17–0 victory in a game of rugby against the 4th Division, with Basil Maclear, the former Irish international, as referee. It was Poulton’s last. His team included two other internationals, Sidney Smart of England, and William Middleton Wallace of Scotland, while the opposition fielded Billy Hinton and Tyrell, both of Ireland, Rowland Fraser of Scotland, and Morton of England. Ronald Poulton Palmer’s grave is in Hyde Park Corner (Royal Berks) Cemetery, near Ploegsteert, Belgium. A memorial to him was erected at Balliol College, on the west wall of the Chapel passage. The cross marking Poulton’s grave in Flanders was taken back to Oxford, and is mounted in a wall in Hollywell Cemetery.

George Cunningham, his Oxford teammate and captain, wrote on hearing of his death: “He ran, as everyone remembers, with a curiously even, yet high-stepping motion, his head thrown back, the ball held in front at full arms’ length. Invariably cheerful, seldom without a beaming smile on his face, he was a welcome companion on the football field and everywhere else.”

At Rugby, a service was held on 10 May. The Reverend Albert David, Head Master of Rugby School, delivered these words in his sermon: “… we have indeed given of our best. If we were asked to describe what highest kind of manhood rugby helps to make, I think we should have Ronnie in mind as we spoke of it. God had endowed him with a rare combination of graces … what we hoped would come of it … strong and tender and true, he lived for others and died for others.”

On 30 May 1915, a memorial service was held at St Giles’ Church in Oxford. Reverend William Temple addressed the congregation, saying: “Many of us believed that with his ready sympathy, his utter freedom from selfishness, and his courage to follow what he saw to be right, he would grasp the causes of our labour unrest and class friction, and by removing them from the great industry in whose control a large part was to be his, set an example which would prove a great force in our social regeneration … What he hated most in our usual manner of life was the artificial barriers that hold people apart, and the suspiciousness of one class towards another …”

Twenty seven England international rugby players were killed in World War I of a total international toll of one hundred and thirty. One of the most notable was Poulton-Palmer, who was considered by many contemporary observers as perhaps the greatest-ever attacking rugby union threequarter. 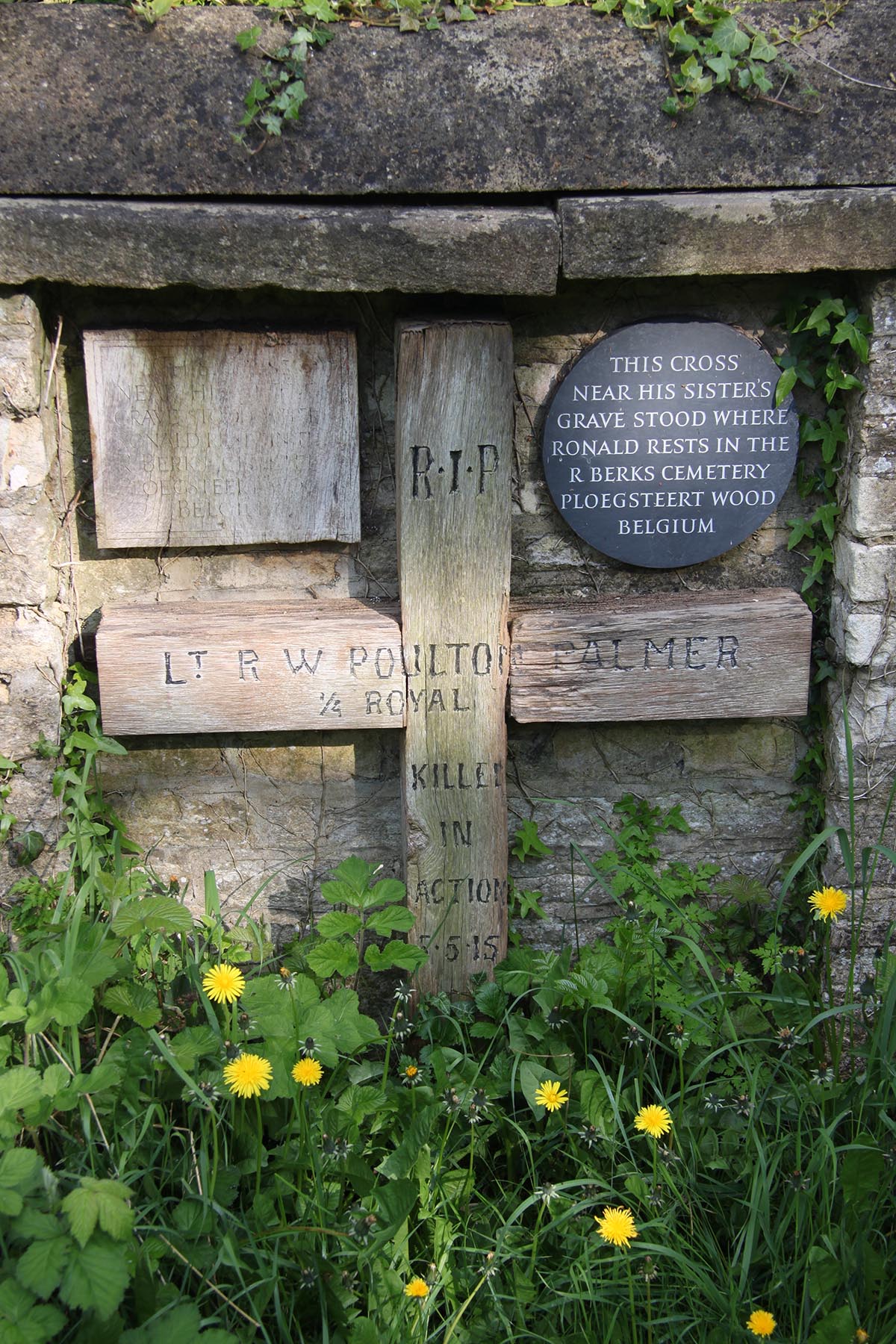