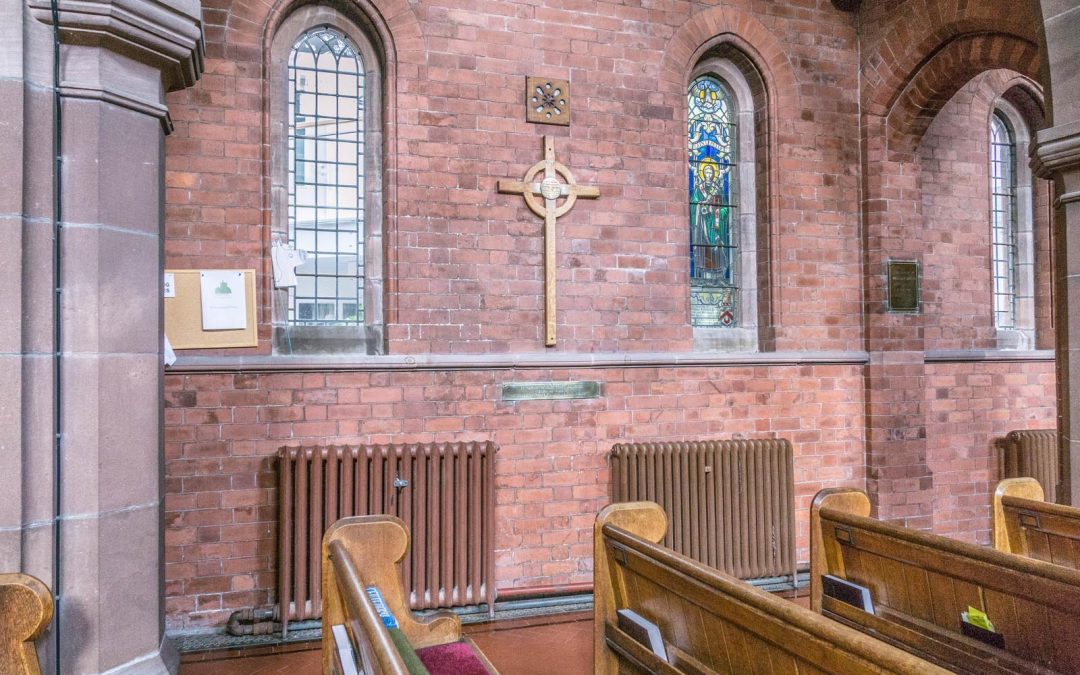 Small metal GRU tag at top of shaft, also circular brass plaque on centre of cross. 2 small holes above tag where presumably another tag had been. There is a circle of wood running between the shaft and cross member. 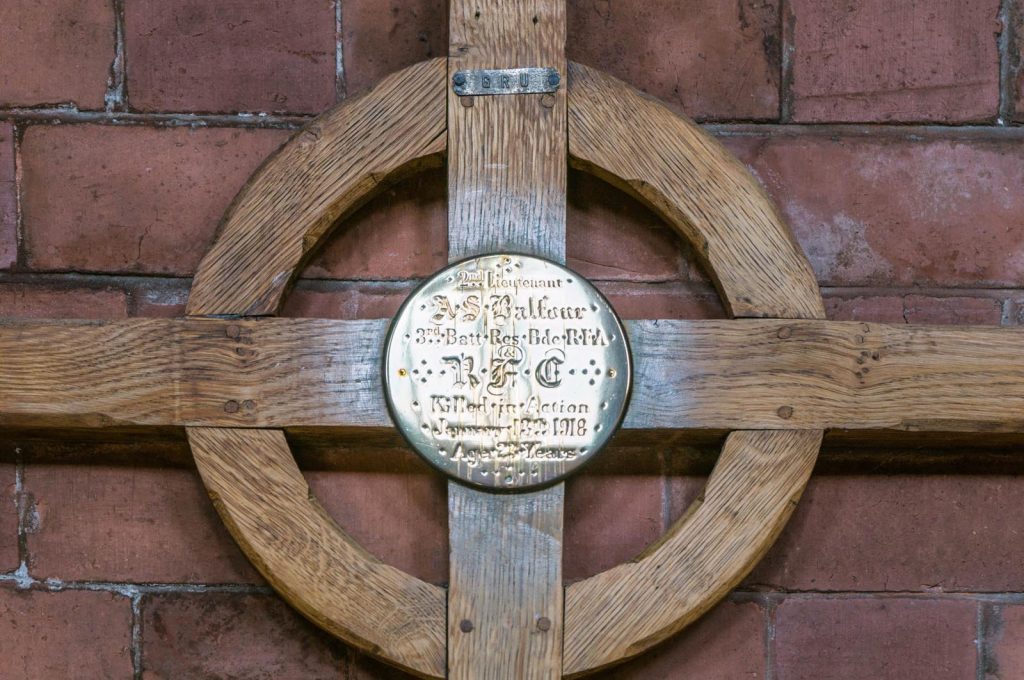 Other information
Mounting to wall: Screwed to the wall. On the left hand side as you enter the church.
Detailing: The cross is in very good condition and looks of better quality than the standard “unknown” crosses. It is light coloured possibly varnished, looks as though it has had some preservation work done, there is evidence of repairs at 10mm and 300mm from the bottom of the shaft. The end of the shaft is cut straight across and the edges are chamfered.
Evidence of use in field (earth marking, cracking, staining, shrinkage): Slight evidence of having been in the ground up to 100mm, lighter shading of wood.
Surface insertion depth (into ground if apparent):
Finish (varnish, paint, oiled, unfinished etc): Possibly varnished
Condition (cracked, paint peeling, woodwork, damage etc): No cracking, peeling etc.

Notes and observations:
There is a brass plaque below the cross “ In memory of Alan Scott Balfour , Born at Oxton Killed in France 1918 aged 23 years” which was put in the church before the cross was returned, the cross was then placed above it when it was returned. Alan Scott Balfour was the son of Sir Robert Balfour MP. He is the only person with three memorials in the church. They are fastened to the North Wall adjacent to St. Peters window. On the circular brass plaque are the words 2nd Lieutenant A.S. Balfour 3rd Batt. Res Bde RFA & RFAC Killed in Action January 13th 1918 age 23 years. There is a panelled war memorial in the church for those killed in 1st and 2nd world war. His name appears at the top of the 2nd panel:- Royal Field Artillery Alan Scott Balfour 2nd Lieut. at to RAF France Jan 13, 1918. He was killed in action while flying as an observer in an Armstrong Whitworth FK8 B5826 flown by 2nd Lieut. P.A.Hall who was wounded. They were on a photographic mission when shot down over Bantouzelle at 11.00. Ltn Hans Schlomer of Jasta 5 claimed at ‘Bristol’ at 12.28 (German time). It was the 2nd of his eventual 4 victories.

He is buried at Tincourt New British Cemetery . He was the husband of Edna W. Balfour and lived at 47 Buckland Crescent, Hampstead,London. This is an old church, interesting windows and beautiful architecture, in what was a very affluent part of Birkenhead at the beginning of the 1900’s. The church and vicarage were severely damaged on the night of the 12th March 1941. Restoration was finally completed in September 1951 at a cot of £31,550. Insurance did not cover the full cost, the difference was made up by subscription from the Parishioners and £500 from the church in Canada.

My sincere thanks to Sue from the Parish Office who arranged for the Verger to send me details of who the cross commemorated. Many thanks to the verger for his information and interest. Last but not least the Rev Joe Kennedy who was unaware of the crosses history but was greatly interested when we explained and told him of the returned project. 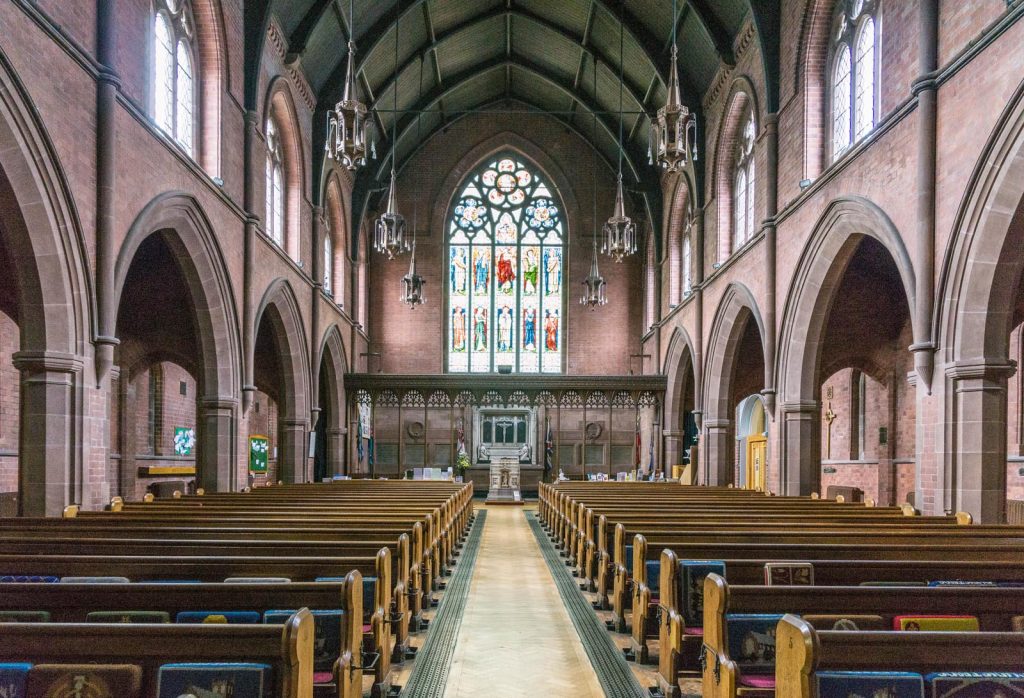 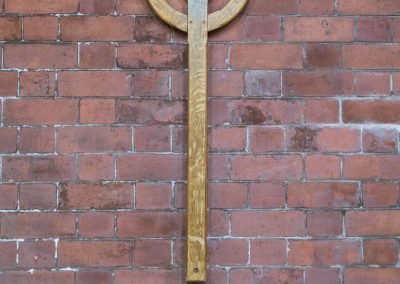 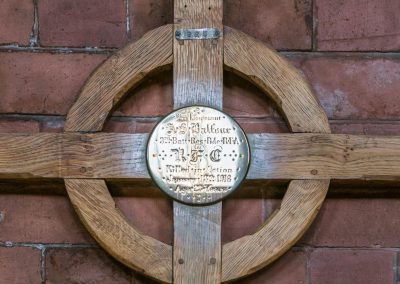 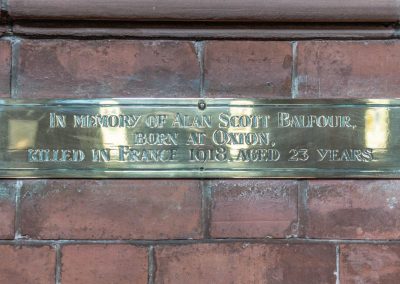 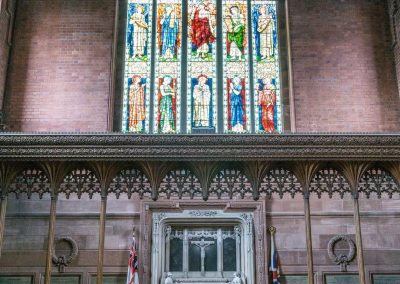 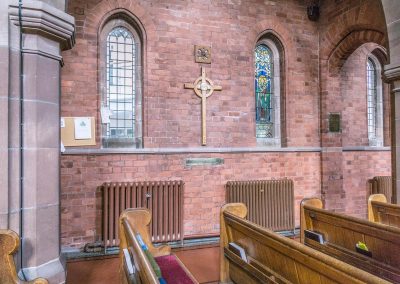 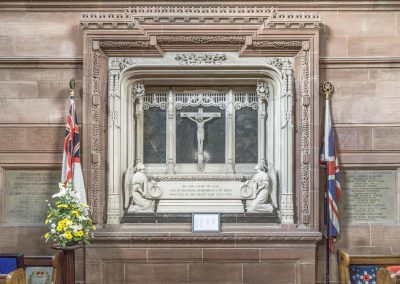 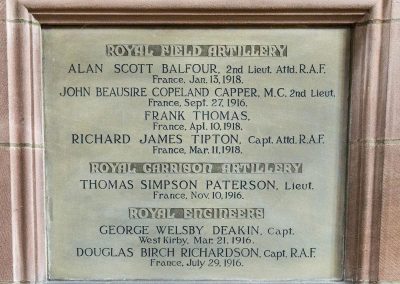 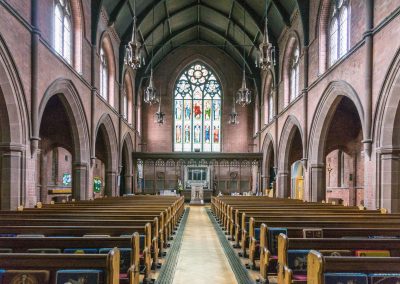