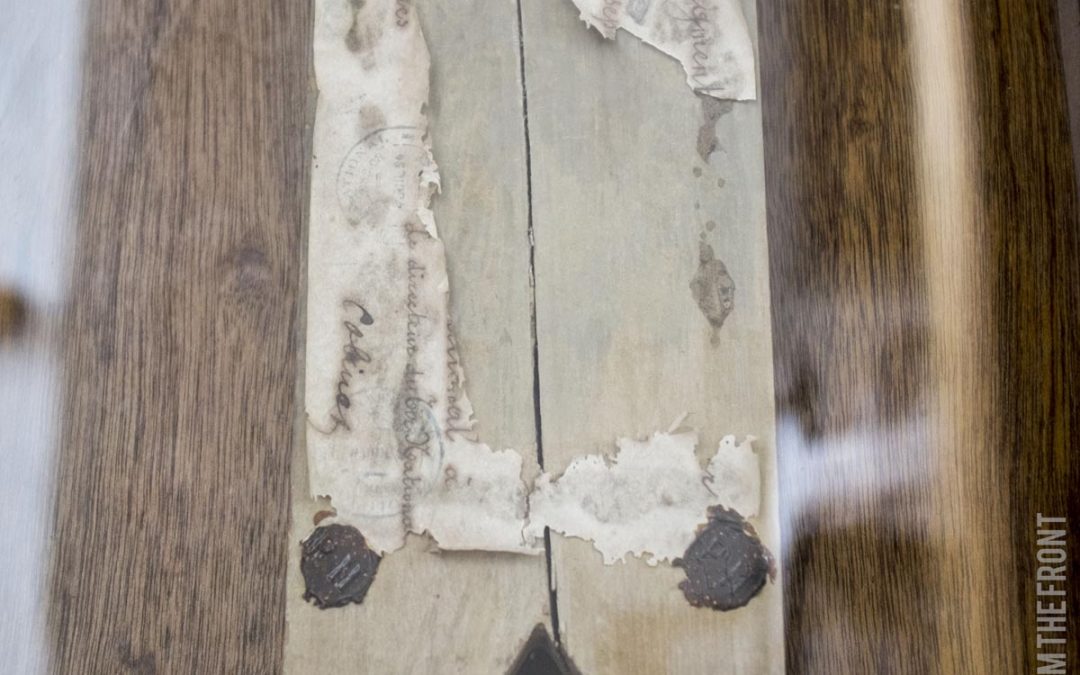 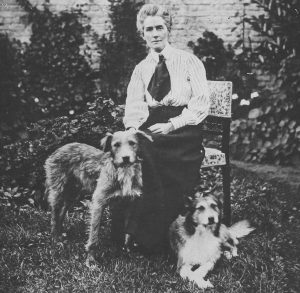 Date of survey: 16/07/16
Location: St. Mary’s Church
Town/village: Swardeston
County: Norfolk
Details on cross:
Handwritten on paper and on the wood, illegible due in part to the glass and to wear and time. believed to come from the TIR National where her execution took place. The pencil marks also apparently refer to …A.R. Valentine 1st Regiment S. African Infantry, and Canadian… March 1919.
Cross dimensions:
Shaft height: 111 cm (1110 mm)
Beam width: N/A (Only the upright is present)
Width of wood: 12 cm (120mm) at thickest part 5cm (50mm) at thinnest
Thickness: 1.2cm (12mm)
Circle plate: N/A
Outer diameter:
Width of circle: N/A
Thickness: N/A
Mounting: Mounted in glass fronted oak case, spaced off backplate with blocks.
Detailing:  fragments of paper and glue stuck to base of wood.
Evidence of use in field: weathered, not clear which way up it would have been.
Finish: unfinished rough wood.
Condition: cracking and danmage that could date to removal from T.I.R in Belgium, it is only a partial cross and is damaged.
Other information: There is a stained glass window and a pennant to the rear of the alter as pictured in the gallery below. The remains of the cross are directly opposite the entrance below the loft next to a framed photo of Edith Cavell. The church also contains a pennant, and a stained glass window dedicated to Edith who was born in a house nearby, she lived in the rectory and her father was the rector of the church. The church is just of the Keswick Road in Swardeston village with easy access. Parking available near the lychgate for two average vehicles, church is open during daylight hours, key holder nearby if closed.

Edith Cavell is buried in Life’s Green in the precincts of Norwich Cathedral on the East side. There is a memorial to her just off Tombland in Norwich, both have recently been refurbished. There are additional memorials to her bravery across the whole country and indeed Europe. She had been working at The Berkendael Medical Institute before the outbreak of the war and returned to Brussells in 1914, to continue working as a nurse. She was also centrally involved in hiding soldiers from the German authorities and repatriating them. She was arrested on the 3rd of August 1915, always outspoken she admitted to sheltering French, British and Belgian soldiers, and men of military age. She was sentenced to death and on 12th of October 1915 shot at the TIR national shooting range. Her body was buried next to the wall of Saint-Gilles Prison. In May 1919 she was repatriated, given a State Funeral at Westminster before coming home to Norwich.

The story of Edith Cavell is rather more complex than a paragraph will allow. Several books have been written about her life and many opinions expressed as to the case, it’s legality, whether what she did was good or bad and also regarding the use of her as emblematic in the propaganda war and recruiting drive that ensued. There is no question however of her remarkable bravery. There is a considerable amount of material available online to read about her. This website is a good starting point.

The cross itself is also a bit of a mystery and the provenance is unclear. It is believed to be the marker from her grave, but the evidence that ties it to her is open to question, It certainly doesn’t match the photographs of her grave in situ in Belgium. Information is still being sought and if anyone can help please feel free to comment below. 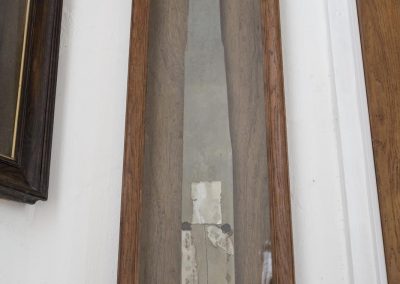 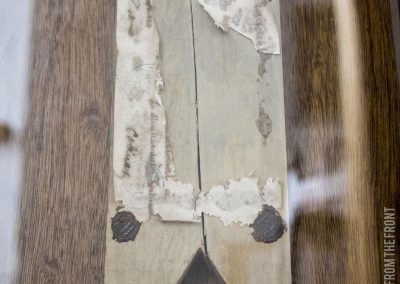 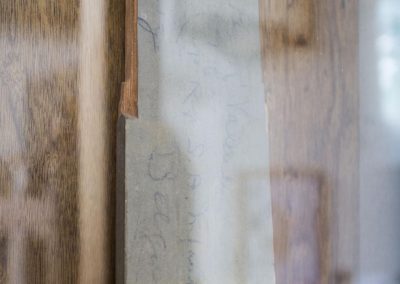 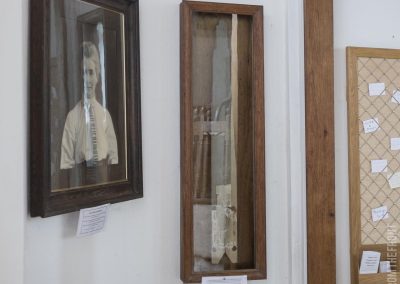 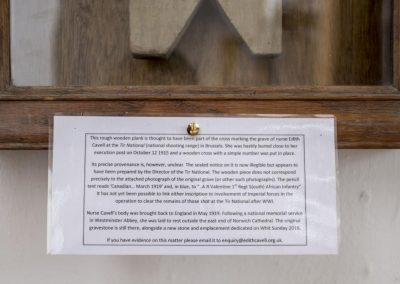 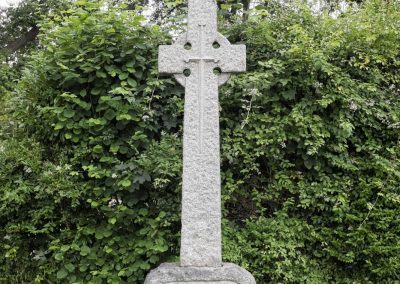 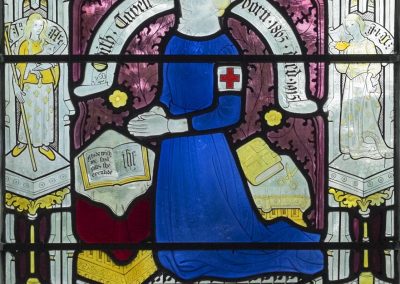 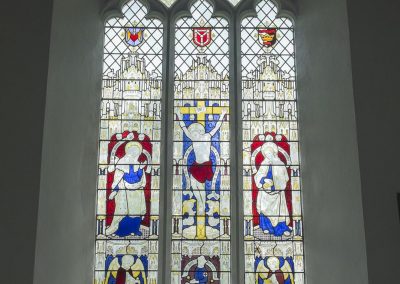 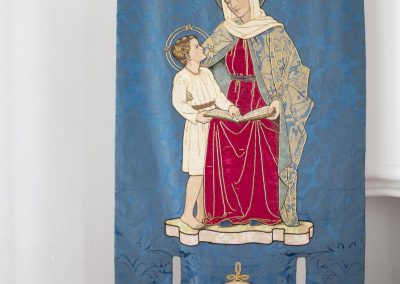 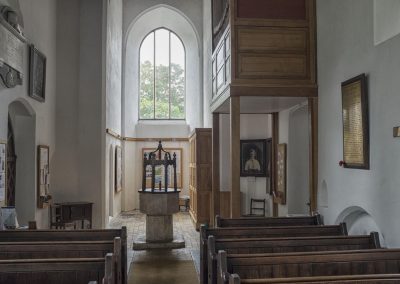 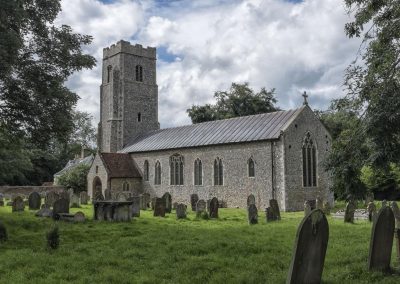