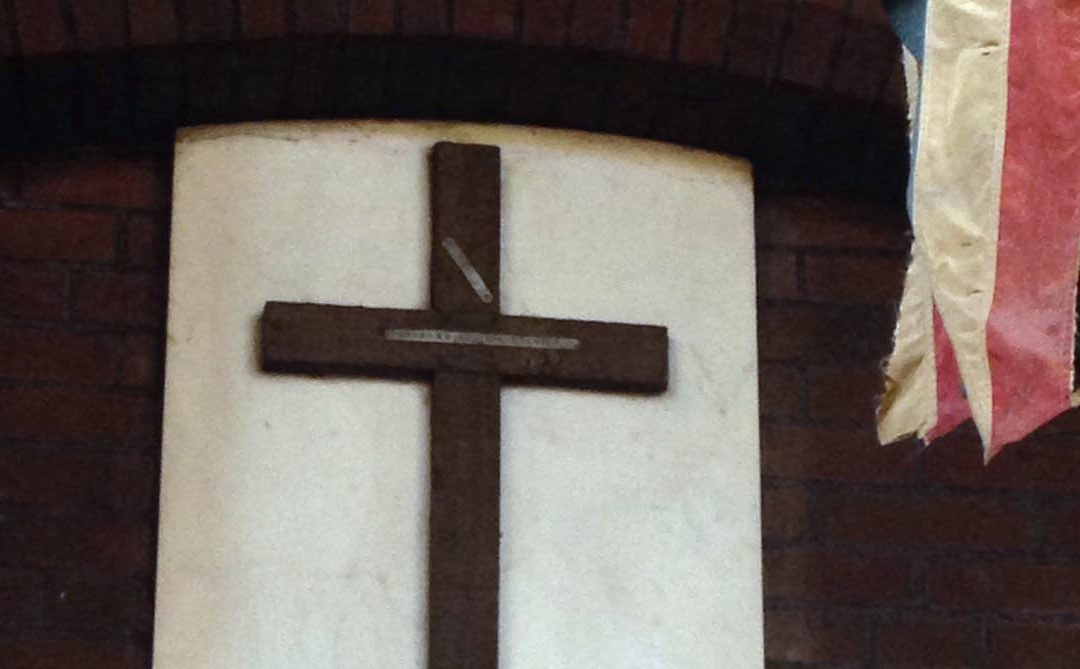 Other information
Mounting to wall: Cross is mounted on marble and attached to the wall high up on the right as you enter the church. Below the cross is a marble tablet “To the Glory of God and in grateful memory of those members of Saint Bedes Church who gave their live s in the Great War 1914-1918. Further below that again is a wooden tablet stating that “the wooden cross above is from the grave of an unknown soldier in Flanders and is given for safe keeping by the south Liverpool and Dingle Branch of the British Legion”.

Above the cross hangs a Union Jack on a standard very tattered and torn and dirty a corner of it is folded up on the shelf below. Nothing was known about this flag.

Detailing:
Evidence of use in field (earth marking, cracking, staining, shrinkage): There is evidence of use in the field slight discolouration up to 4inches. The bottom of the cross could not be seen which may have been cut off before being mounted.
Surface insertion depth (into ground if apparent):
Finish (varnish, paint, oiled, unfinished etc): Dark stained
Condition (cracked, paint peeling, woodwork, damage etc): Cross is in very good condition no evidence of cracking or damage to wood.

Notes and observations:
As most of these churches are closed during the week I made contact with the vicar Elaine Jones, she was lovely and so helpful and agreed to open the church for me so that i could photograph the cross, I cant thank her enough for her help, she was also very interested to learn of the project and the story behind the crosses. She then directed me to the sister church St. Clemence in Beaumont Street, Liverpool 8, again met a very helpful man David Thomas and two ladies of the church David showed us a marble tablet in the church dedicated to parishioners killed in the great war. The first 2 names were of a Rev. Hubert Octavius Spink, who had been the Rev., at the church and was originally from Dulwich , he enlisted and was a member of the Royal Army Chaplains Dept., and 55th(West Lancs) Div. K.I.A.on the Somme 9.8.1916 Age 38. He was Melville Wood tending the wounded and burying the dead when he was killed by a shell. Although he had been wounded 3 times in the previous 48 hours and sent to the rear, he refused while he could be of service to the men. He is buried at Dive Copse British cemetery . The 2nd person is rev. Charles Benjamin Plummer curate from the church he was in the Royal Chaplains Dept., and 61st Inf. Brigade. He was killed on the battlefield 0n 12.3.1917. He was 27 and is buried in Carnoy Military Cemetery. His father was Rev. at a church in Halewood a suburb of Liverpool, he lost two more sons in the war, all 3 are commemorated on a memorial there. David showed us one last item from the church which was a Bronze tablet not on the wall but waiting to be cleaned dedicated to all the pupils of the school that was attached to the church and killed in the war 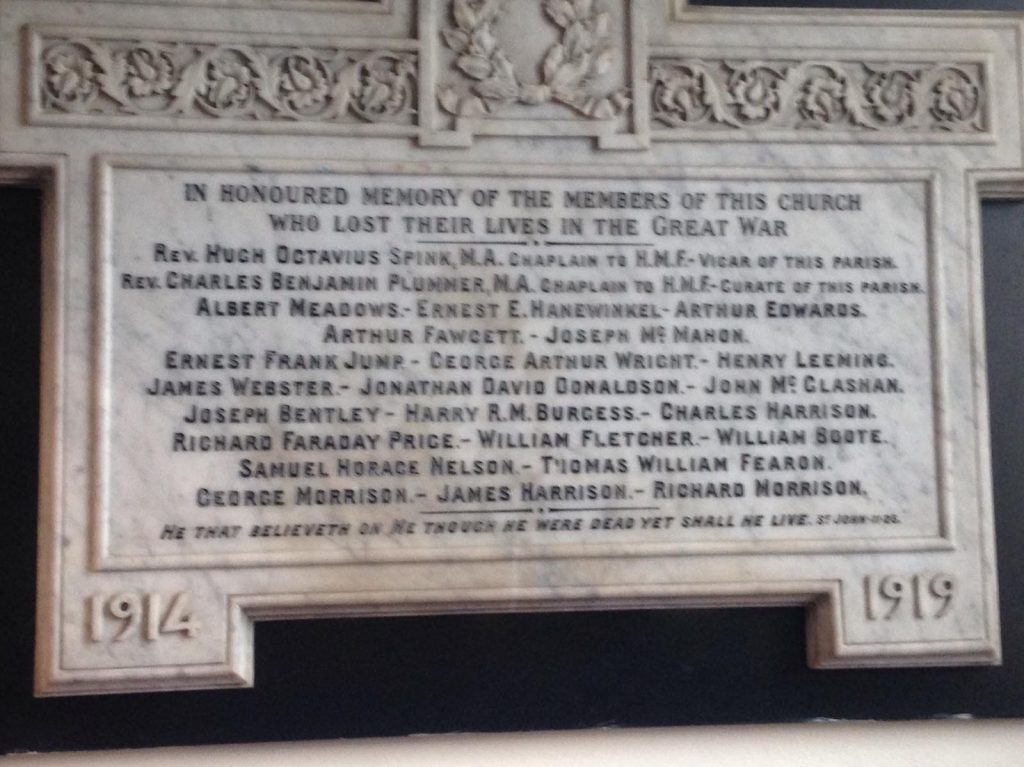 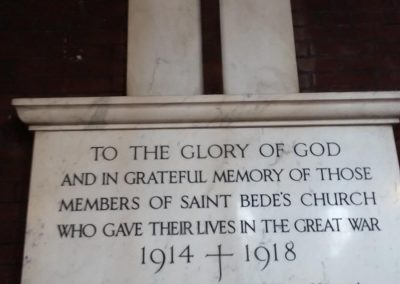 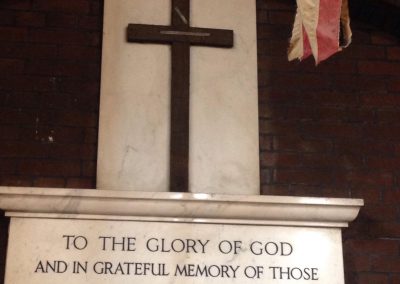 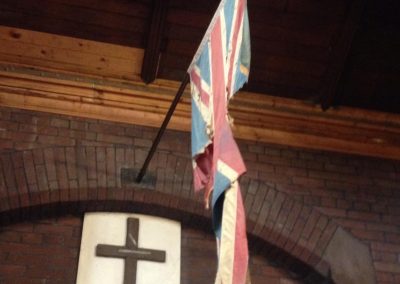 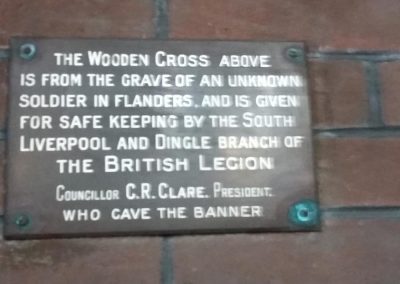 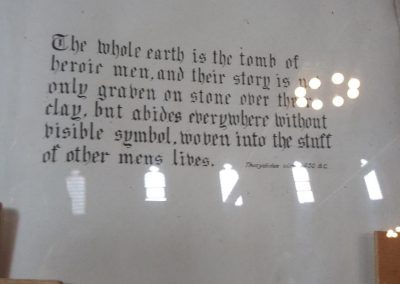 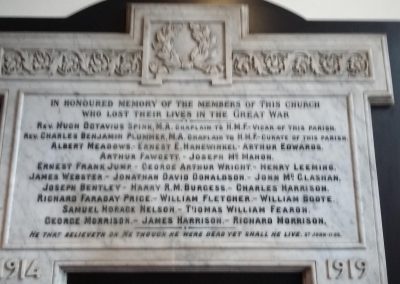 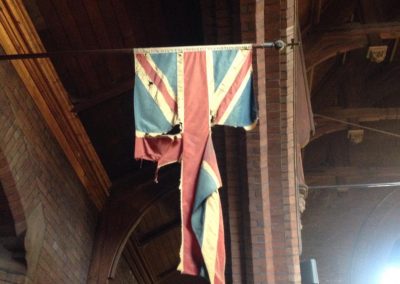 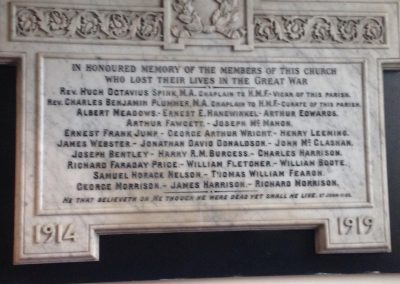 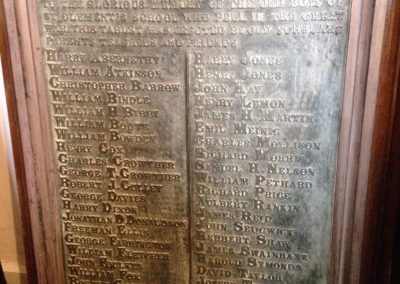