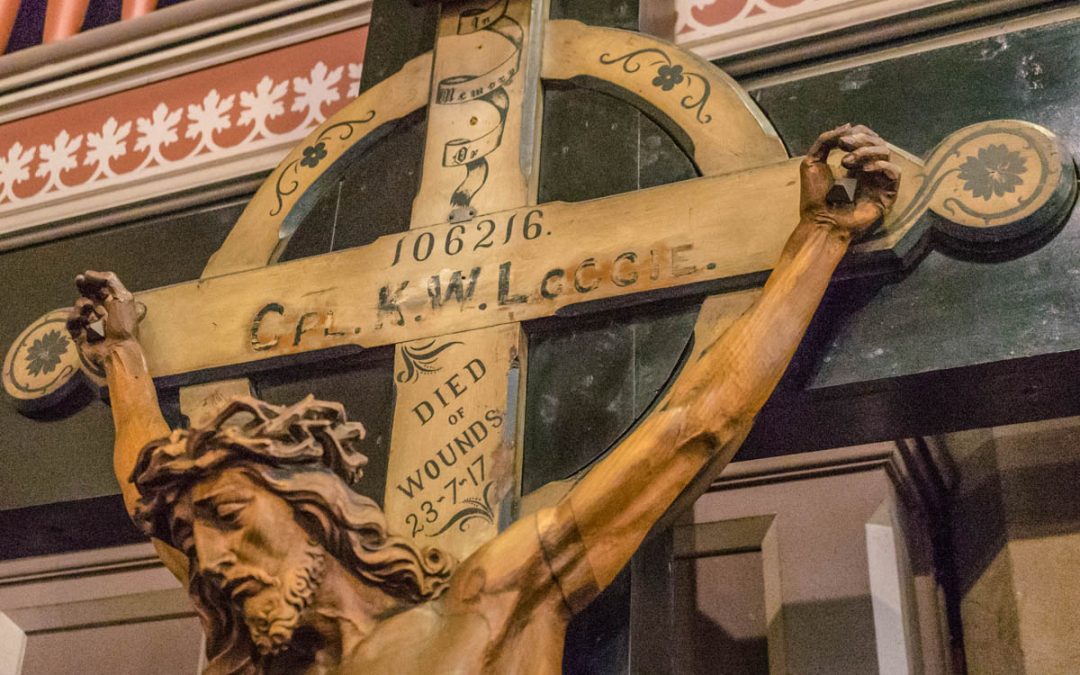 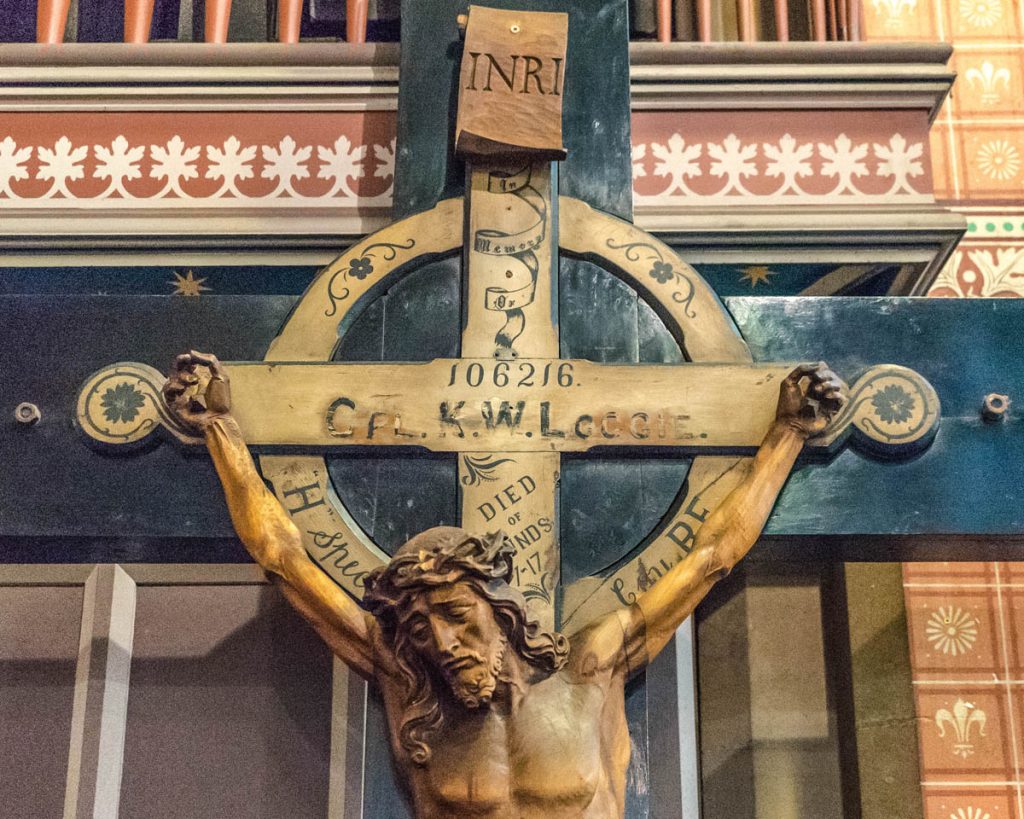 Evidence of use in field (earth marking, cracking, staining, shrinkage): Not apparent.

Surface insertion depth (into ground if apparent): Not apparent. 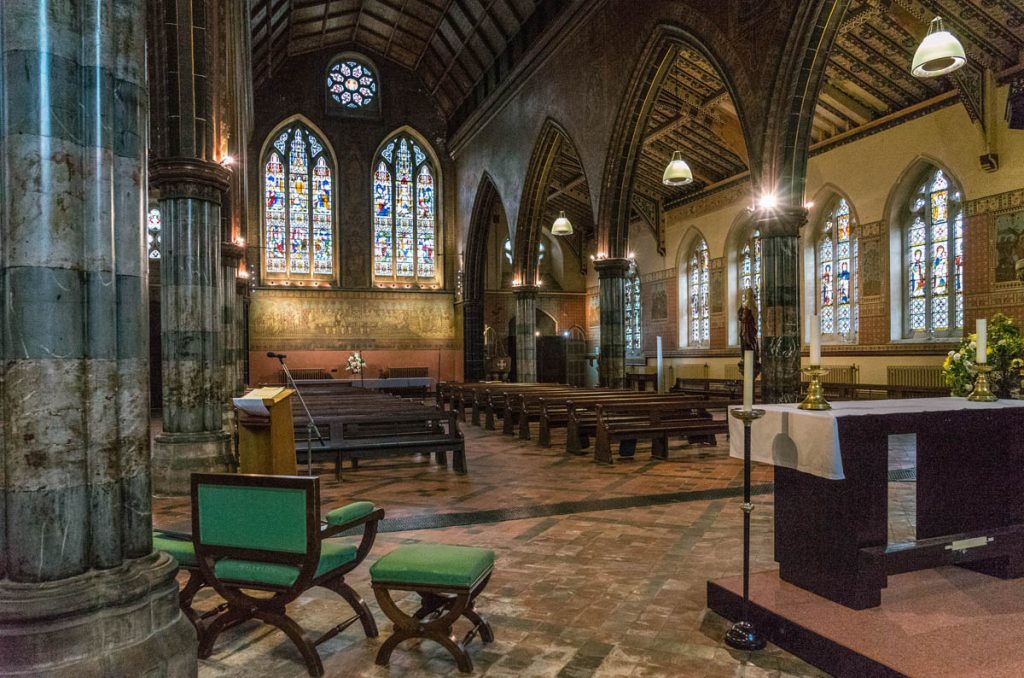 Other information, notes and observations: The battlefield cross for Corporal Keith William Thomas Loggie is very unusual. It is a big cross, in a light coloured wood, which has been mounted on another very large black cross. A carving of Christ has been nailed onto it and a scroll with the lettters ‘INRI’ has been placed at the top. This is a Latin phrase ‘Lesus Nazarenus Rex Ludaeorum’ meaning ‘Jesus of Nazareth, King of the Jews’, and was the notice that Pontius Pilate nailed over Jesus as he lay dying on the cross. According to information on a forum, the original cross had lain on the floor in a corner for years until a new vicar rescued it and mounted it on the black cross.

Keith Loggie was born in Donnybrook, Dublin on 27th October 1987. His father was William Ebenezer Loggie, born in Glasgow, and his mother was Martha Millicent Nightingale born in Newcastle upon Tyne. She died in Stroud. He had 2 sisters and 3 brothers – one sister died in Hertford, and two brothers and another sister died in Liverpool. One brother aged 2 died in Dublin. The family were on the 1911 census in Dublin, but at some point after that came over to Liverpool. Keith was educated at Kildare Street College, and then the Royal College Science in Dublin, becoming Junior Assistant to Professor Gilbert Morgan who specialised in chemical warfare. Keith went on to join the Royal Engineers ‘H’ Special Coy which was part of the 2nd Battalion Special Brigade of newly formed special gas companies from 1916 onwards. Soldiers were given the rank of Corporal on volunteering from other regiments if they had a chemical background.

Keith served with the British Expeditionary Force in Hohenzollern, Arras and the Somme. He was also present at Loos for the 1st British gas attack on 25th September 1915. He was wounded and gassed at Nieuport on 22nd July 1917, and died on 23rd July at La Panne Hospital, Belgium. He is buried at Coxyde Military Cemetery, Belgium (grave ref I.K.34). He was 18 years old and was a very popular member of his battalion. His grave marker was made by his comrades. After his death an officer wrote to his family ‘Your son was one of the finest young men in our company. He was one of our most capable N.C.O’s and a great favourite with all’.

The beautiful church of St Margaret of Antioch in Toxteth is Grade II listed and was built in 1868/9. It was designed by G.E.Street, and paid for by Robert Horsfall – a local stockbroker and Anglo Catholic. A bronze plaque dedicated to Robert Horsfall is inlaid on the chancel floor. The name Antioch in Turkey was considered to be the cradle of Christianity, and the church became the centre of Anglo Catholicism in 19th century Liverpool. The church organ is Grade I listed. It is a manual two pipe organ made in 1869 by Henry Willis, and retains its original structure, layout and registration. The architectural style of St Margaret of Antioch is ‘decorated neo gothic’ and the walls are richly painted – most of it by Maddox and Pearce. The Lady Chapel contains a dedication window to HMS Lively which was a Royal Navy destroyer built at Camel Lairds, Birkenhead. She was adopted by the church and dedicated on 2nd February 1947. A scroll beside the altar holds the names of all those who lost their lives when the ship was sunk by German bombers in the Mediterranean sea on 10th May 1942 during the Second World War.

Special thanks to Nadine Daniel who arranged access for us, and kindly shared her vast and very interesting knowledge of St Margaret of Antioch. 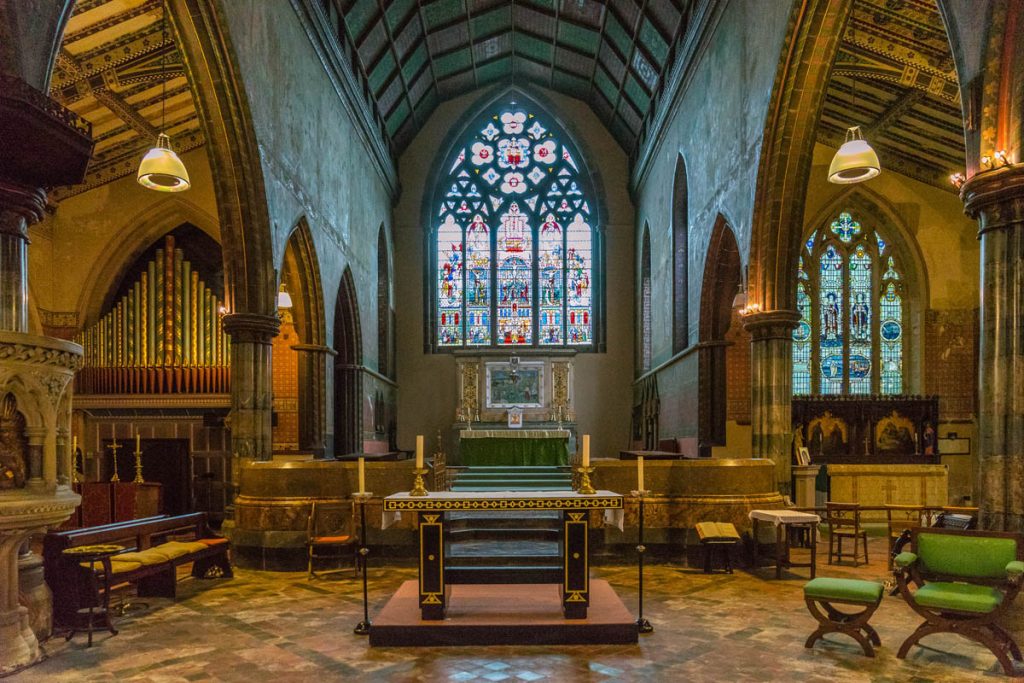 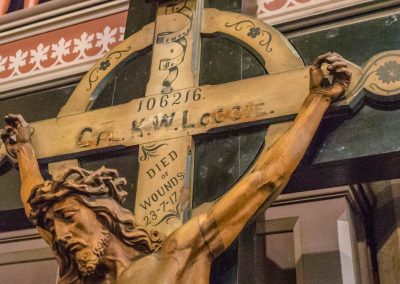 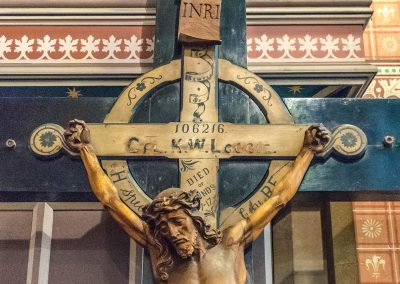 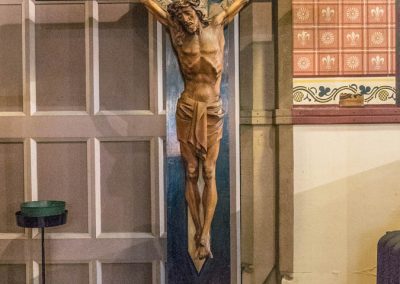 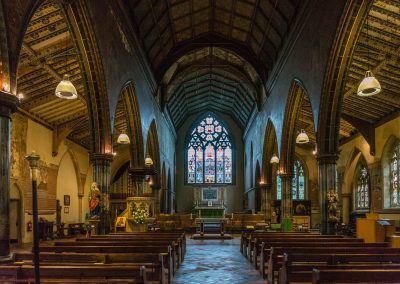 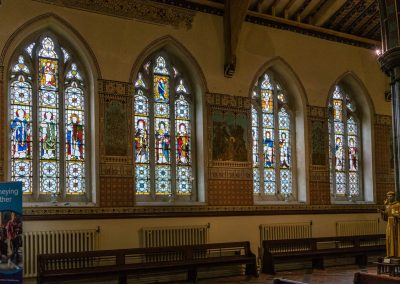 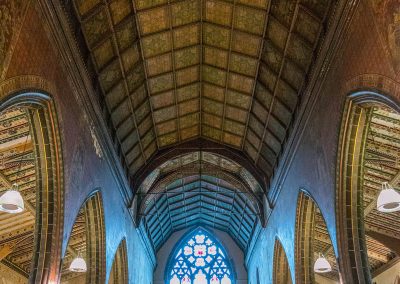 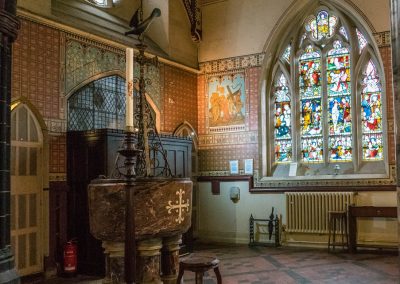 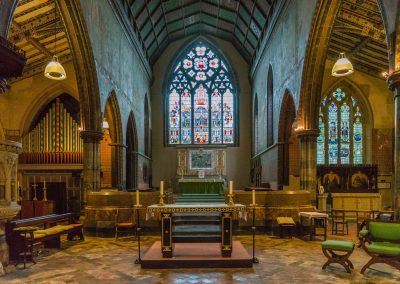 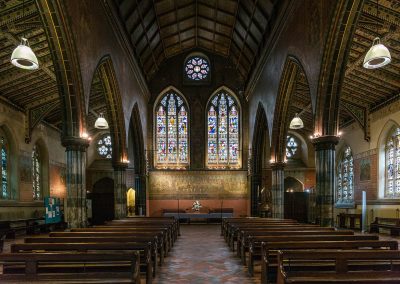 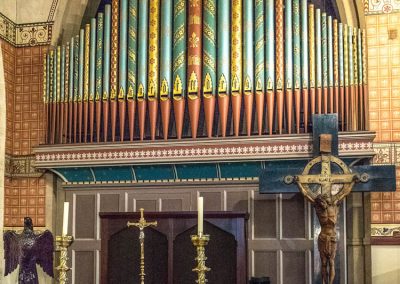 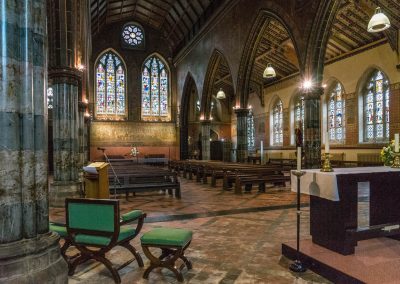 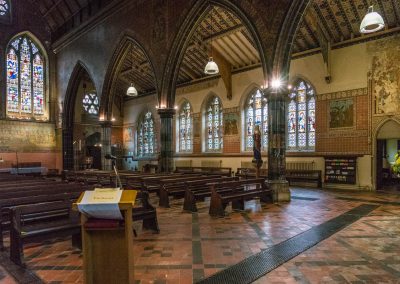 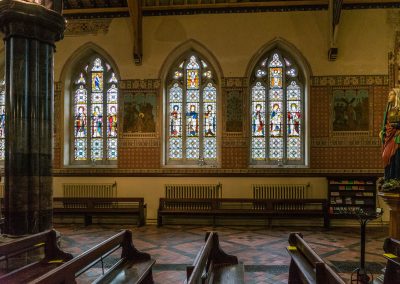 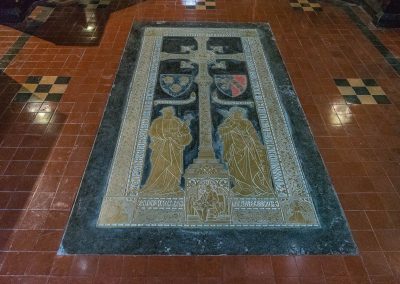 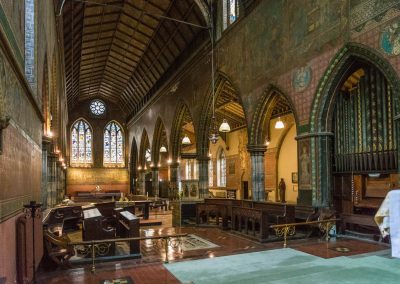 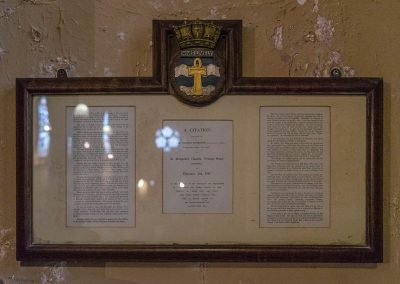 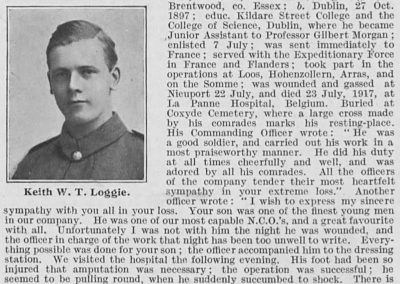 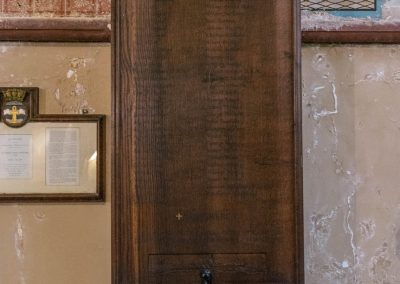 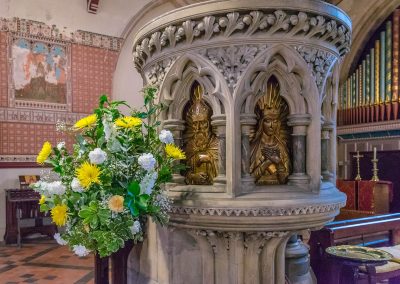 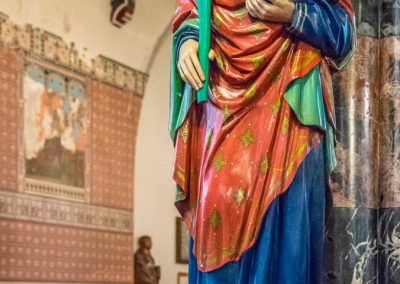 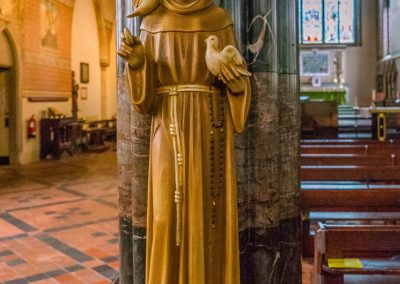 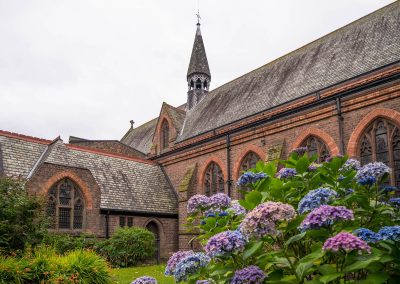